What I learned in eight years reading propaganda from inside the Hermit Kingdom. 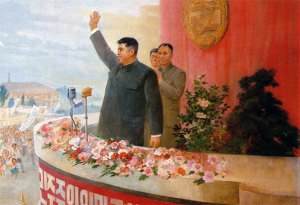 View a slideshow of the poster children of North Korea

America talks the talk; Pyongyang walks the walk. At least according to Kim Jong Il’s domestic propaganda machine. In countless posters displayed in city centers, North Korean resolve is contrasted with American spinelessness. “If we say we do something, we do it,” a towering Korean People’s Army soldier shouts in one poster as he slams his clenched fist down on the continental United States. “We don’t utter empty words!” Other posters depict North Korean fighter planes and missiles destroying the U.S. Capitol while helpless American soldiers, mere spindly, insectlike creatures, are hoisted effortlessly on bayonets or squashed under missiles.

Such violent imagery isn’t confined to posters. Even North Korean math textbooks draw on the vocabulary of military might: “Three People’s Army soldiers rubbed out thirty American bastards. What was the ratio of the soldiers who fought?” Dictionaries and schoolbooks encourage North Korean citizens to speak of foreigners as beasts with “muzzles,” “snouts,” and “paws,” who “croak” instead of dying. In a chilling illustration from a recent North Korean art magazine, a child with a toy machine gun stands before a battered snowman; the caption reads, “The American bastard I killed.”

This triumphalism might seem irrational in view of North Korea’s small size and obsolete military hardware. But according to the country’s propaganda, the pure-bloodedness and homogeneity of the Korean race make the North’s army a uniquely tight-knit and formidable fighting force. This way of thinking reflects an official ideology that many outsiders misperceive as communist but in reality belongs on the far right and not the far left of the ideological spectrum. No, I’m not referring to the pseudo-doctrine of North Korean “Juche” thought, a mishmash of humanist bromides (such as “man is the master of all things”) that has never had the slightest effect on policymaking. I’m referring to the ideology that the Juche smokescreen is meant to hide from the outside world: a paranoid nationalism that has informed the regime’s actions since the late 1940s.

This worldview is not set out, at least not straightforwardly, in the writings of North Korea’s father-and-son dictators, which are more often praised than read. Yet it informs all of the country’s mass propaganda, most of which can easily be accessed at the North Korea Resource Center in Seoul. This material is varied in form if not in content: Over eight years, I’ve examined everything from nightly news reports and television dramas to animated cartoons and war movies; from the glossy-papered Rodong Sinmun, the Workers’ Party organ, to women’s magazines printed on gray, low-quality paper; from short stories and historical novels to dictionaries and school textbooks (these last printed, semi-legibly, on the worst paper of all); from reproductions of wall posters to photographs of monuments and statues. There is no way of knowing how much of this material is produced every year, but so significant is the propaganda apparatus that it was one of the few North Korean institutions that did not miss a beat even during the catastrophic famine of the 1990s.

North Korea’s ideology is not merely a nationalist-tinged communism of the old Yugoslav variety. It is a race-based worldview utterly at odds with the teachings of Marx and Lenin. And yet, the outside world continues in the illusion that North Korea is a hard-line Stalinist state. True, the nation’s first leader, Kim Il Sung, was installed by Soviet occupiers after World War II. It is also true that the personality cult of Kim Il Sung and his son and successor Kim Jong Il bears superficial resemblance to the cults of Stalin and Mao. Yet look closer, and it’s clear just how different North Korean ideology is. Not for nothing was the country almost as isolated during Soviet times as it is now in the post-communist world.

North Korea’s race-centric ideology was inspired by that of the fascist Japanese who ruled the peninsula from 1910 until the end of World War II. Having been taught by their colonizers to regard themselves as part of a superior Yamato race, the North Koreans in 1945 simply carried on the same mythmaking in a Koreanized form. This can be summarized in a single sentence: The Korean people are too pure-blooded, and so too virtuous, to survive in this evil world without a great parental leader. This paranoid nationalism might sound crude and puerile, but it is only in this ideological context that the country’s distinguishing characteristics, which the outside world has long found so baffling, make perfect sense. Up close, North Korea is not Stalinist — it’s simply racist.

The celebration of racial purity and homogeneity is everywhere in North Korea. The citizens pictured on the country’s new currency, for example, could pass for members of the same family, which in a sense they are. A worker in one painting appears much like a farmer or soldier in another, while the children pictured in schoolbooks are downright identical. White is the dominant color in Pyongyang: White concrete plazas, white or at least blond-stoned buildings, and white statues of virginal maidens in long gowns abound. Pyongyang is often photographed or depicted under snow, a favored symbol of purity itself. “Our nation has always considered its pure lineage to be of great importance,” a North Korean general told his South Korean counterpart during a 2006 meeting to discuss realignment of the maritime border between the two states. “Since ancient times our lands have been one of abundant natural beauty,” he said. “Not even one drop of ink must be allowed.”

North Korea has often been called “solipsistic,” but strong racial pride always entails intense awareness of an inferior other. For the North Koreans, foreigners are inferior — even the friendly ones. Typical is a panoramic painting of a procession of exultant tourists during 1989’s Pyongyang World Festival of Youth and Students. In whatever direction they happen to be looking, their faces are partly obscured by a sinister shadow. A fat Caucasian woman wears a low-cut blouse, while a few African women appear in halter tops; in Pyongyang today, such clothing is considered indecent. Here and there, unsavory-looking men sport long sideburns and denim, more signs of Western decadence. The only well-groomed and attractive person in view, and the only one whose face is evenly lit, is the Korean guide — an innocent young girl, naturally — who leads the way in traditional dress.

Although popular imagery strongly implies that all foreigners are morally inferior, and occasionally criticizes the Jews’ influence on world affairs, it subjects the Japanese and Americans to the worst routine vituperation. Like the “Japs,” the former occupiers, the Yankees are condemned as an inherently evil race that can never change, a race with which Koreans must forever be on hostile terms.

Even the Soviet Union, for all its decades of patronage, is remembered with more contempt than fondness. In Eternal Life, a 1997 historical novel, Nikita Khrushchev is called a “traitor,” one of the “fake communists” who betrayed world socialism. In the same book, Kim Il Sung chuckles about how he learned Soviet secrets by getting Leonid Brezhnev drunk. History books rarely mention the Soviet Union’s demise without sneering about how it went down “without firing a shot.”

The Korean War predictably occupies a central place in anti-foreigner propaganda, but this tends to focus less on the U.S. Air Force’s extensive bombing campaign (which is hard to reconcile with the myth of a protective leader) than on isolated village massacres and other purported outrages. The killing of tens of thousands of civilians in Sinchon in October 1950, which was actually perpetrated by Korean rightists, is held up as the Yankees’ most heinous crime. The Americans are held responsible for the nation’s current economic woes as well. Last June, the nightly news in Pyongyang constantly intoned that the Yankees are “the cause of all our people’s misfortune.”

What is especially significant and perhaps unique about North Korean nationalism is its emphasis on the vulnerability of the race. Whereas World War II-era Japan’s racialized worldview equated virtue with strength, the North Koreans are taught that their virtue has rendered them as vulnerable as children in an evil world — unless they are protected by a great leader who keeps a watchful eye on military readiness.

Unfortunately for the United States, there is no place in this for any improvement in relations between the two countries. Were Kim Jong Il to abandon his ideology of paranoid, race-based nationalism and normalize relations with Washington, his personality cult would lose all justification, while his impoverished country would lose all reason to exist as a separate Korean state. The problem for U.S. negotiators is therefore not one of sticks versus carrots; the regime in Pyongyang will neither be bullied nor sweet-talked into committing political suicide. Nor, to dispel an increasingly popular pipe dream, can Washington expect the Chinese to make the North Koreans commit political suicide. If you want to know why there’s no possibility of a deal, you can read all about it — in Kim’s own propaganda.