The literature of Dubai's doomed quest to become a cultural mecca.

When the bubble burst last year in Dubai, an endlessly reported detail was the number of cars abandoned -- some supposedly with apology notes stuck to the windshields -- by debt-burdened foreigners fleeing an economy in free fall. Now the German impresario hired to oversee the emirate's ambitious cultural plans has also quit his post, leaving behind not a missive on the Volkswagen Touareg SUV he drove in the desert boomtown, but Dubai Speed, a unique insider's memoir of the grandiose -- and all too fleeting -- attempt to use state power to reinvent a culture. 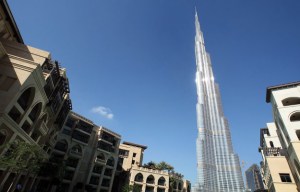 When the bubble burst last year in Dubai, an endlessly reported detail was the number of cars abandoned — some supposedly with apology notes stuck to the windshields — by debt-burdened foreigners fleeing an economy in free fall. Now the German impresario hired to oversee the emirate’s ambitious cultural plans has also quit his post, leaving behind not a missive on the Volkswagen Touareg SUV he drove in the desert boomtown, but Dubai Speed, a unique insider’s memoir of the grandiose — and all too fleeting — attempt to use state power to reinvent a culture.

Michael Schindhelm’s impressionistic account of Dubai’s failed bid to buy an artistic identity by importing talent from around the world joins books in German and English about Dubai as the instantaneous city, with its made-to-order architectural majesty and astonishing new acts of consumerism, on the brink of cracking up even as it was being built. This emerging literature of the collapsed Dubai experiment gives a more detailed picture of the backstage bluster and indecisiveness that led to such unparalleled overreach than one finds in the news coverage. The portrait revealed is depressing, from the fortune-seeking Western consultants jockeying for position to the money-mad al-Maktoum dynasty with its thwarted pretensions to international grandeur.

Schindhelm was already a master of reinvention by the time he arrived in Dubai in 2007, after resigning from his job as director-general of Berlin’s venerable trio of opera houses. Born in communist East Germany, Schindhelm worked briefly as a chemistry professor with future chancellor Angela Merkel, then started directing regional theaters in Germany and Switzerland before moving on to Berlin, where he quit in protest after the financially strapped city was forced to cut opera funding. Schindhelm subsequently traded Berlin for a postmodern city-state that, at least at the start of his sojourn, lured him with promises of unimaginable riches and boundless excitement.

“One doesn’t really know whether the man is to be pitied or envied,” the German newspaper Die Welt commented when Schindhelm departed for Dubai. After all, weren’t the Gulf states a “refuge for those who had substantially failed and now far away use gold to build fake artistic dreams and castles in the air?” From the start, Schindhelm found in Dubai a land of superlatives and excess in stark contrast to the sober constraints of home. “This city is in total mobilization,” he writes in his book, currently available only in German, “not only in competition with time; it is a protest against time.… Everything is in a process of transformation, marching forward.”

His pressing task was to create swiftly what Dubai’s leaders proclaimed would be “the most comprehensive cultural destination in the world.” This included, first and foremost, an opera housed within an undulating structure designed by starchitect Zaha Hadid to resemble sand dunes and meant to accommodate an audience of 3,000 in a society with no tradition of theater or music. Schindhelm tried in vain to point out the acoustic drawbacks of such a mammoth auditorium, pushing instead for a never-to-be-built opera house that would reflect Dubai’s aspirations as a laboratory for globalized culture. “On today’s program is Così Fan Tutte,” he imagined, “and tomorrow a Lebanese dance theater group; then follows an appearance by Cirque du Soleil, a modern Beijing opera, and a Bollywood musical. And the auditorium is actually a melting pot.”

Soon state museums in Berlin, Dresden, and Munich were working with Schindhelm to build a Museum of World Cultures, and there were plans to create dozens more museums, libraries, theaters, and galleries. The cultural authority was also in talks to include the Hermitage, the J. Paul Getty Museum, and the National Museum of China in building “the world’s largest consolidated museum.”

But Schindhelm was hampered from the outset by the profound disarray and highly opaque decision-making of Dubai’s madcap dash to globalize. He was assigned to work in the same skyscraper where Dubai’s top government authorities sat on the 52nd floor, while his own office was located on the 28th with two phone lines, only one of which could make international calls. The fax machine was on the 36th floor, and the photocopier was on the fourth.

He was also confronted by particularly Arabic notions of Western culture. He was told early on, for example, that Dubai natives believe “piano playing comes from the devil’s fingers” and warned, “You will have to convince us otherwise.” Opera for some in Dubai, Schindhelm reports, is really the Lion King. His local colleagues on the arts authority weren’t overly devoted to the task at hand, and Schindhelm recounts how one preferred to spend time learning to fly his new Gulfstream G250, while a white-robed 24-year-old employee passed the office hours perusing a green silk-bound book containing photos of his personal automobile collection of more than three dozen vehicles.

Worse, he was never certain whether censorship threatened the entire endeavor. When Dubai participated in live broadcasts from New York’s Metropolitan Opera as a test-drive for introducing Western high culture, scenes from the Dance of the Seven Veils were cut out of Richard Strauss’s Salome to avoid offending Islamic sensibilities, though Schindhelm reports that this was hardly necessary because a good number of Dubai ticket-holders failed even to show up. In an interview about his book, he told the Berliner Morgenpost that Dubai customs officials would not let him receive by mail a monograph about the painter Francis Bacon because they feared its contents contravened Islamic dietary strictures.

Weary of such frustrations and hopelessly lost in Dubai’s labyrinthine decision-making process, Schindhelm quit last summer as Dubai’s economy crashed around him, bringing down with it the vision of a new mecca for the arts. His dreams and those of the ruling dynasty have come to naught: There’s now a parking garage on the site intended for the opera house, and the scheme for the Museum of World Cultures disintegrated as hastily as it was conceived.

Dubai’s real estate collapse, which forced the country to seek billion-dollar bailouts from its prosperous neighbor, Abu Dhabi, had other casualties, too: the architectural wonderland conceived in the boom’s feverish days. The Burj Khalifa skyscraper, for example, is now the highest building in the world, as tall as the two World Trade Center towers stacked atop one another, but is having serious trouble attracting tenants since it opened in January.

The fantasyland of Dubai, the countless towers erected in inhospitable desert out of a need for telegenic architectural monuments, is carefully analyzed in Dubai: Stadt aus dem Nichts (Dubai: City Out of Nothing), a collection of essays and interviews edited by Elisabeth Blum and Peter Neitzke. The contributors examine the astounding array of man-made islands and environmentally unsustainable architectural inventions — the bulk of them unbearably gaudy but with a wow factor unrivaled almost anywhere — intended to market Dubai’s development. The volume includes a piece on the exploitative working conditions of imported Southeast Asian laborers who built the Burj and other towers and concludes with the dark and now fully realized prediction of plunging prices for the massive construction boom financed by debt.

Perhaps the best look at this desert mirage is the prescient book Dubai: The Vulnerability of Success, published in 2008 by British political scientist Christopher M. Davidson. Well before the real estate debacle, Davidson raised questions about how long Dubai could remain immune from regional conflict, organized crime, and terrorism, all of which would swiftly affect its allure as a haven for investment and luxury travel. He voiced concerns over its development model, aired the deep misgivings among its people, and suggested that it faced a rising level of security threats from within and without, including serving as a center for organized crime operations involving massive smuggling, gunrunning, and money laundering.

Dubai today seems to have lost what was once a cultural arms race with other Gulf governments. Abu Dhabi’s plans to import Western culture via branches of the Guggenheim and the Louvre are moving ahead. New York University this fall will welcome the first students to its Abu Dhabi campus, where the former director of the Metropolitan Museum of Art, Philippe de Montebello, is an advisor. Qatar has already opened its impressive I.M. Pei-designed Museum of Islamic Art and is planning to construct a museum of Middle Eastern modern art.

But one observer, at least, has not lost faith in Dubai’s potential: Schindhelm writes in his book that Dubai is still working to create an alternative to the social injustice and religious fanaticism in neighboring Saudi Arabia and nearby Iran and Pakistan. Perhaps he was naive to see in the desert sands an opportunity for a cultural utopia, but he’s wise to warn against gloating over the end of the city’s glitzy heyday. With its central location between Europe and Asia, Dubai seems likely to survive and thrive, if more soberly, as a trading center. But next time, it might do better to realize that culture is worth more than just eye candy for real estate megalomania that can too easily run amok.