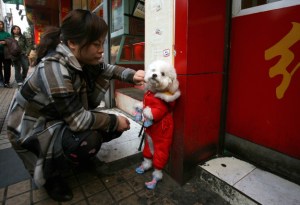 View a slideshow about a dog’s life in China

Two years ago, while visiting Changsha, the dusty provincial capital of China’s Hunan province, I decided to take a walk into the crowded lanes and alleys behind my hotel. I’d been in countless lower-middle-class Chinese neighborhoods like this one, and the sounds were happily familiar to me: the sizzle of frying food, the clanking bells of bicycle vendors, and the loudly insistent voices of the province’s famously temperamental residents. But a few minutes into my walk, I heard something unfamiliar and alarming: the howl of an animal — a dog, I thought — in pain. Curious, I followed the sound around one corner, and then another, until I came across a sight whose painful memory I’ve never been able to shake: A medium-sized mutt hung by its rear legs from a rope, while two shirtless young men beat it to death with clubs. At their feet, the pulverized remains of additional dead dogs were sprawled like bags of water. Instinctively, I reached for the camera that I carry with me when traveling. But just as I was about to shoot, one of the two men noticed me — a white foreigner — and pointed his club in my direction. He was clearly aware that my interest was disapproving, and I had no interest in pressing the issue.

Residents of Changsha have been eating dog for centuries, and ethical questions like whether beating is an acceptable means of slaughter have rarely come to the fore (some aficionados claim that the method ensures more flavorful meat). But due in part to a recently introduced draft law on animal cruelty (China’s first), that situation is changing. The proposed law, first circulated last fall, could subject individuals who sell or eat cat and dog meat to U.S. $725 in fines ($7,250 for institutions), up to 15 days in jail, and required statements of repentance. Now the Chinese media and the country’s raucous Internet discussion boards are in the throes of something akin to a clash in America’s culture wars, with attitudes toward the proposed legislation dividing Chinese by regional and socioeconomic lines. In China, where cuisine is often an issue of identity and rural and urban populations are deeply sensitive to mutual perceptions and misperceptions, the proposed legislation has a symbolic resonance that few other recent social issues have shared. It’s a wedge issue, China-style.

According to a study done by the College of Veterinary Medicine at the China Agricultural University, pet ownership expands rapidly when per capita annual GDP reaches $3,000. This benchmark was reached years ago in Shanghai, Beijing, and other first-tier Chinese cities, and sure enough, pet ownership has expanded rapidly there. In Beijing, for example, dog ownership expanded from 100,000 pets to 1.5 million between 2001 and 2007; not coincidentally, during the same period, Beijing’s pet stores increased from fewer than 20 to more than 500. Meanwhile, trade shows devoted to the pet industry have spread rapidly across China, and — based on my visit to a 2005 show in Guangzhou — the attendees are mostly Chinese interested in marketing chew toys to the urban middle class.

Although not all of China’s pet owners can be judged as wealthy, one would be hard-pressed to think otherwise during a walk through Xujiahui Park, a sprawling maze of paths on the southern edge of Shanghai’s French Concession, favored by Shanghai’s elite — and their dogs. During winter months, the pedigrees of these pampered pooches — each requiring a $291 license, roughly 39 percent of per capita rural income in 2009 — is evident not only in their shiny coats, but also in the custom-cut clothes in which some of their owners insist upon dressing them. In recent weeks alone, I’ve seen a poodle in silk slippers and a schnauzer in a fur-lined blue silk coat complete with a mandarin collar. When Beijing authorities pulled dog from restaurant menus in advance of the 2008 Olympics, it was the cosmopolitan sensibilities of this demographic (and their sensitivity to foreign perceptions of Chinese culinary traditions) that drove the decision. And when, in the early summer of 2009, reports began to circulate that 37,000 dogs had been beaten to death in an anti-rabies campaign in rural Shaanxi province, it was this pet-owning demographic that objected most vociferously, especially online. The animal-cruelty law, drafted by Chang Jiwen, a researcher at the Chinese Academy of Social Sciences in Beijing, was in part a direct reaction to this incident.

Famously, pet ownership had been outlawed as a bourgeois affectation during the Cultural Revolution, and though that prohibition is now history, the legacy of the prohibition remains strong outside China’s more cosmopolitan quarters, where income, agricultural lifestyles, and culinary tastes have much in common with pre-boom China. Indeed, as incomes rise in China’s wealthiest cities, those in rural China remain relatively stagnant, creating the oft-mentioned Chinese income gap. In 2009, for example, per capita income among China’s urban residents was 3.34 times that of its rural residents, or $2,515 and $754, respectively. This income gap is also a social gap, expressed in differing access to education, social services, and even political rights, and the resulting cultural gap creates contempt and resentment. In Shanghai and other wealthy cities, few comedic tropes are quite so popular as the bumpkin come to the big city; in rural China, few figures are quite so loathed as the Shanghai sophisticate who looks down upon their long-held traditions.

Animal protection is the perfect proxy for these tensions. In simple terms, it pits rural, traditional Chinese against the young cultural firmament. But regionalism is only one component of the disagreements. On New Year’s Day, I was awakened by the pained cries of a goose being slaughtered in the hallway of my Shanghai apartment building by the children of my elderly neighbors. When I mentioned that, perhaps, the hallway was a less-than-ideal place for this grisly act, I was told pointedly that “foreigners should keep out of our traditions.” But it wasn’t just me: Many of my neighbors, mostly younger and more educated than the goose eaters, were just as irritated, if not distraught, by these dinner preparations.

Class tensions worry Beijing. Although there’s no chance that pet ownership and animal cruelty could cause insurrection (though it has been the cause of protest in the past, including a raucous 2006 picket at a Beijing zoo), there’s also little chance that leaders are going to allow passage of a largely symbolic, mostly unenforceable act that implicitly pits those who can afford a Shanghai dog license against those who can’t and won’t. Until that gap is bridgeable, China’s stray dogs would best be advised to keep their tails down