Is Tokyo buying support for its right to catch whales? 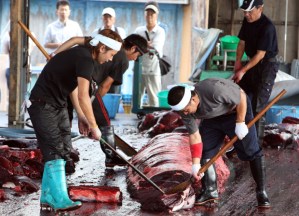 Whale sushi, anyone? Click through here for an FP Photo Essay.

Last month, a working group of the International Whaling Commission (IWC) — the organization set up to regulate the global whaling industry recommended that the body condone a limited amount of commercial whaling. If the commission follows the panel’s recommendation, it would be a major victory for the world’s whaling nations — Japan, Iceland and Norway — and thanks in no small part to the years of work Japan has put into cultivating allies in the commission.

It might seem somewhat counterintuitive at first that Japan would devote aid dollars to this purpose. After all, it could in principle just leave the IWC and be no longer bound by its rules. But there is evidence suggesting that the threat of economic sanctions, in particular limiting access to other countries’ fishing waters, is sufficient for Japan to prefer remaining within the framework of international diplomacy. Vote-buying may then be the most cost-effective way for Japan to make its voice heard.

Concrete answers to these questions have remained elusive despite much attention from political scientists and economists. To date, the only clear-cut evidence of the use of foreign aid for vote-buying in international organizations is in the case of the U.N. Security Council. A 2006 study found strong effects of Security Council membership on bilateral foreign aid from the United States. Other researchers have found evidence that U.S. influence also leads to an increase of World Bank and IMF sponsored projects.

There are two features of the IWC that make it an even more clear-cut case for identifying vote buying through foreign aid. First, it is a single-issue organization — all of its important proposals revolve around restrictions on commercial whale catching — and it is characterized by an extreme ideological divide between the major aid donors. Japan and a host of small developing countries (plus Norway and Iceland) are on the “pro-whaling” side and the rest of the OECD and some of the emerging economies are on the “anti-whaling” side.

Second, though there has been lots of movement among aid-recipient countries, which have joined, exited, and switched voting blocs in the IWC throughout the last 20 years, the positions of the major players have remained entirely unchanged over the same period.

Here’s what I’ve found: Those countries that have joined the IWC recently and voted with Japan have also been more likely to see increases in Japanese bilateral aid receipts. For instance, Antigua & Barbuda and St. Kitts & Nevis, both of which were on the panel behind last month’s decision, have received around $40 more in per capita aid from Japan since joining the IWC.

But two sides can play at this game. As it turns out, IWC membership is an even more powerful predictor of decreases in British aid receipts and the combined aid receipts from France, Germany, and the United States. Even more strikingly, the net effect of becoming a pro-whaler on total turns out to be negative. In other words, punishments from the anti-whaling donors are larger than rewards from Japan.

This raises the question of why countries do join Japan’s side. There are many untestable explanations such as additional unobserved side payments. However, the foreign-aid data itself also offers a partial explanation. Foreign aid can be divided into loans that need to be paid back and grants that do not. Japanese foreign aid increases are almost entirely in grant form, which developing countries prefer, while the aid reductions from anti-whalers come almost entirely from loans.  It is hard to know what the effects on recipient-country welfare might be.

An additional interesting question is which countries are most likely to be susceptible to the lure of foreign aid dollars. It is clear in the data that in the case of the IWC, most of the bribing and punishment occurs over a set of small Caribbean and Polynesian island nations. My research also implies that at the same cost, bribing members to switch blocs is more attractive than bribing nonmembers to join. It might be that small island nations get bribed the most because many of them were in the IWC to begin with. Nonetheless, if evidence mounts that small nations are willing to sell their votes in international organizations, this might give credence to the view that country-votes should be population-weighted, giving more voting power to countries representing more people.

There is no reason to fear that commercial whaling is going to make a large-scale comeback anytime soon. Even if no countries were to join the anti-whaling bloc in the future, Japan would have to add another 30 countries to its coalition to overturn the moratorium on whaling, that requires a two-thirds majority. But in another sense Japan’s efforts have been successful. The very last proposal in the data set under study was a resolution to make a statement that the moratorium was “no longer necessary.” Thanks to six Caribbean islands, this resolution was passed by one vote. Japan might not be able to change the laws, but it can use the Whaling Commission to make its opinions known.

America’s Dysfunctional Russia Policy Is Unlikely to Improve Under Biden