They're here, they're queer, and governments from Africa to Asia don't quite know what to do about it. Four countries where gay rights movements face an upward battle for equality.

The struggle for gay rights in the United States has been going on now for decades, brought into the national consciousness by the AIDS crisis in the 1980s and 1990s and most recently crystallized by the battles over same-sex marriage and the "don't ask, don't tell" policy for gays in the military. In other parts of the world, however, the fight is in much earlier stages. Here are four countries where nascent gay- and transgender-rights movements are just picking up steam -- and meeting some ugly backlash as well.

The struggle for gay rights in the United States has been going on now for decades, brought into the national consciousness by the AIDS crisis in the 1980s and 1990s and most recently crystallized by the battles over same-sex marriage and the “don’t ask, don’t tell” policy for gays in the military. In other parts of the world, however, the fight is in much earlier stages. Here are four countries where nascent gay- and transgender-rights movements are just picking up steam — and meeting some ugly backlash as well.

The battle: Uganda’s Parliament, not content with the colonial-era anti-gay legislation that already exists, is considering the Anti-Homosexuality Bill, which seeks to punish “aggravated homosexuality” — essentially, sex if one of the participants is HIV-positive — with death, and other forms of gay sex with life imprisonment. Those who are aware of homosexual activity and fail to report it face up to three years in prison. The bill, which could be voted on as soon as this month, would also criminalize working for gay rights, with a possible sentence of up to seven years.

The outlook: After intense pressure from foreign governments and human rights NGOs, Ugandan President Yoweri Museveni has distanced himself from the bill, believing that passing it would potentially jeopardize foreign donors’ willingness to send aid to Uganda. But, though the bill has catalyzed action in Uganda and overseas (and focused attention on three American evangelicals who appear to bear some accidental responsibility for the bill’s genesis), anti-gay sentiment is still stubbornly entrenched there, and it will take a lot for that to change. Uganda is far more likely to remain one of the almost 40 African countries that still bans homosexuality altogether than it is to join South Africa, the only country on the continent to legalize gay marriage.

The battle: Like many Ugandans, Malawians see homosexuality as an evil Western import, something that wouldn’t naturally exist in their country if it weren’t for the influence of outsiders. So a few cases involving newly visible gay Malawians have shocked people in this African country, where homosexuality can be punished with up to 14 years in prison. First, on Dec. 28, two men, Steven Monjeza and Tiwonge Chimbalanga, were arrested for celebrating their engagement with a traditional chinkhoswe ritual — the first time a gay couple had ever done so. The verdict in their case is expected by March 22. On Jan. 30, another man was arrested for “disturbing the peace” by putting up a poster that read “Gay Rights Are Human Rights.” Then, during a Feb. 15 anti-gay crackdown, a 60-year-old was arrested for “sodomy.”

The outlook: The arrests and Monjeza and Chimbalanga’s subsequent mistreatment in prison have led to condemnation from international NGOs, as well as escalated tension between gay rights activists and the government, which actively taunted activists to show their faces — in other words, to risk arrest and imprisonment. “As far as the Malawi government is concerned, we only have two gays in Malawi — Steven Monjeza and Tiwonge Chimbalanga,” said government official Kingsley Namakhwa. “If there are others, let them come out in the open.” In a country where one in 14 people has HIV/AIDS, with eight people dying every hour, according to the international AIDS nonprofit AVERT, coming out into the open might be a great idea — if that meant better access to health services, not prison and torture. 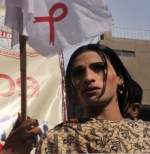 The battle: Hijras, or transgender and transvestite men in India and Pakistan, have long been a recognized and partially tolerated population, scraping together a living as wedding dancers and prostitutes and facing the constant threat of aggression and discrimination. India decriminalized homosexuality last summer, but it is still illegal in Pakistan, and a private gay marriage ceremony there in 2005 was met with death threats. So it was big news in July 2009 when Pakistan’s Supreme Court ruled that hijras would be officially recognized and registered as citizens. Like India, whose election commission began allowing hijras to mark their gender as “other” on ballot forms last November, Pakistan is recommending that a third gender option be researched for entry on the country’s state-issued identity cards.

The outlook: Since the historic 2009 ruling, there has been a significant increase in hijra activism, with demonstrations and celebrations taking place across the country, and the country’s first ever hijra cricket team beat a professional squad last August. But the fight for equality is by no means won — the cricketers had trouble convincing any local politicians to show their faces at the match. Meanwhile, Pakistan’s gays continue to live privately. If they find community, it’s in small, isolated, urban pockets. Grassroots movements may be encouraged by the recent legal victories there and in India, but broad social acceptance is still a ways off.

The battle: Turkey is widely recognized as being one of the most LGBT-tolerant countries in the Middle East. It is one of only four countries in the region — the others being Israel, Jordan, and, since 2003, Iraq — where gay sex is legal, and Istanbul has a lively gay community. But Turkey’s ostensibly liberal society has come under scrutiny over the last couple of years due to a string of murders committed against gay and transgender people. In 2008, Ahmet Yildiz was killed by his father in Turkey’s first reported honor killing of a gay person. Over the last two years, meanwhile, at least eight transgender people have been murdered. In the first months of 2010 alone, two transgender women were killed, apparently due to homophobic violence. The country is split between a modernizing Islamist government that hopes to join the European Union and a conservative population that is squeamish about the increasingly visible role of gay people in Turkish society. But now, on top of the killings, Ankara is cracking down on gay rights activists, filing civil proceedings to close local group Black Pink Triangle on the grounds that it violates “Turkish moral values and family structure.”

The outlook: International NGOs are in an uproar over the violence and the government’s attempt to hinder activist groups. And Turkey’s effort to join the European Union will probably lead it to temper some of its worst excesses. Still, the deaths and the governmental repression suggest that Turkey’s reputation as a relative oasis of human rights in the Middle East isn’t going to last long.

NEW FOR SUBSCRIBERS: Want to read more on this topic or region? Click + to receive email alerts when new stories are published on Politics, Economics, Human Rights