Thirty-five years ago this week, Wallace Broecker predicted decades of dangerous climate change caused by humans. Unfortunately, he was all too prescient.

On Aug. 8, 1975, geoscientist Wallace Smith Broecker published "Are We on the Brink of a Pronounced Global Warming?" in the journal Science, the first time the iconic phrase "global warming" was used in a scientific paper. Broecker -- known by all as Wally -- was already a prominent scientist by then, having served on Columbia University's faculty for 16 years. Today, at age 78, Broecker is recognized as one of the fathers of climate science, with more than 450 journal publications and 10 books to his name, ranging from paleoclimatology to chemical oceanography. 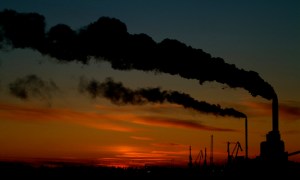 On Aug. 8, 1975, geoscientist Wallace Smith Broecker published “Are We on the Brink of a Pronounced Global Warming?” in the journal Science, the first time the iconic phrase “global warming” was used in a scientific paper. Broecker — known by all as Wally — was already a prominent scientist by then, having served on Columbia University’s faculty for 16 years. Today, at age 78, Broecker is recognized as one of the fathers of climate science, with more than 450 journal publications and 10 books to his name, ranging from paleoclimatology to chemical oceanography.

The past 35 years have also seen humanity answer Wally’s question in the affirmative, running a radical experiment on the only planet we inhabit. Carbon dioxide levels have risen 40 percent to 392 ppm from preindustrial levels of 280 ppm, and the global mean temperature has risen 0.8 degrees Celsius, on 1.3 trillion tons of carbon dioxide. Humanity has produced 60 percent of that global-warming pollution since Broecker’s paper was published. As a result, the planetary ecosystem has fundamentally changed — weather has become more extreme, seasons have shifted, and global ice and snow are in decline — with more rapid and radical change on its way.

Wally’s seminal Science paper built upon decades of earlier work by scientists who had found natural cycles of planetary warming and cooling in Greenland ice cores (Dansgaard, 1973), developed a mean global temperature from meteorological records (Mitchell, 1963), modeled the greenhouse influence of carbon dioxide on the atmosphere (Manabe and Wetherald, 1967, 1975; Rasool and Schneider, 1971), and measured the rise of atmospheric carbon dioxide from the burning of fossil fuels (Keeling, 1973). Synthesizing the work, Broecker accurately predicted “that the present cooling trend will, within a decade or so, give way to a pronounced warming induced by carbon dioxide.”

“To those who even today claim that global warming is not predictable,” climatologist Stefan Rahmstorf writes at the peerless RealClimate blog, “the anniversary of Broecker’s paper is a reminder that global warming was actually predicted before it became evident in the global temperature records over a decade later.”

In fact, one can even go back to the 1896 work of Swedish scientist Svante Arrhenius, in which he predicted that the burning of coal could eventually double atmospheric CO2, leading to a temperature increase of several degrees Celsius, though he believed such a day was far into the future.

For the next 50 years, most scientists considered man-made climate change an unlikely speculation. In the scientific explosion following World War II, however, scientists began using new measurements and the era’s new digital computers to revisit the effect of humanity’s carbon dioxide pollution on the climate, and our modern understanding of the greenhouse effect developed through the work of pioneering scientists like Gilbert Plass, Hans Suess, Roger Revelle, and Bert Bolin (who became the first chair of the U.N. Intergovernmental Panel on Climate Change in 1988). By the end of the 1950s, Frank Capra had made an instructional film on man-made global warming, and Revelle had testified before Congress about the “large-scale geophysical experiment” humanity was conducting with industrial greenhouse gas pollution.

The year 1965 marked the first time the threat of man-made global warming was brought to a U.S. president’s desk, in an extended report for Lyndon B. Johnson by top climate scientists, including Revelle, Charles Keeling (whose measurements of atmospheric carbon dioxide from Mauna Loa have become the most remarkable graph in climate science), and the young Wally Broecker. “By the year 2000,” they wrote, carbon dioxide pollution might “produce measurable and perhaps marked changes in climate, and will almost certainly cause significant changes in the temperature and other properties of the atmosphere.”

In the years leading up to Broecker’s global-warming paper, the field rapidly advanced with the launch of the first weather satellites (with instrumentation invented by Verner Suomi), the mathematical understanding of the nonlinear dynamics of atmospheric flow — chaos theory — by the Massachusetts Institute of Technology’s Ed Lorenz, and the rise of physical oceanography. Several groups of scientists (including the team led by NASA’s James Hansen) competed to test the limits of supercomputers with general circulation models that simulated the planetary ocean-atmosphere interactions that generate the global climate, a practice that continues to this day.

By the end of the 1970s, climate scientists around the world were coming to the consensus that Broecker’s analysis was right — the exponential rise in carbon dioxide emissions would overcome natural cooling cycles and the effects of aerosol pollution to dangerously warm the planet within decades. “Man is setting in motion a series of events that seem certain to cause a significant warming of world climates over the next decades unless mitigating steps are taken immediately,” warned a 1979 report by top climatologists for Jimmy Carter’s White House, recommending “[e]nlightened policies in the management of fossil fuels and forests” to “delay or avoid these changes.” At the World Meteorological Organization’s First World Climate Conference in 1979, the scientists agreed that rapid, CO2-driven warming was “plausible” and called on governments to “foresee and to prevent potential man-made changes in climate that might be adverse to the well-being of humanity.”

The field of climate science has continued to advance since Broecker’s global-warming paper, with breakthroughs in ice age theory (Hays et al., 1976), computational modeling (Manabe and Stouffer, 1979), ocean dynamics (Luyten et al., 1983), the paleoclimate record (Bradley and Jones, 1993), meteorological impacts of global warming (Trenberth, 1999), and ice-sheet dynamics (Schoof 2007), to highlight just a few of the thousands of papers that have built our understanding of our planetwide “experiment.”

Increasingly, the scientific enterprise has shifted toward the measurement of the changes wrought by global warming in every corner of the world and toward a new emphasis on civilizational risk management and public engagement. The U.N. Intergovernmental Panel on Climate Change, since its founding in 1988, has been a unique endeavor of scientific synthesis to inform policymakers, some of whom have decided to heed the volunteer organization’s work, making investments in sustainability instead of waiting to incur irreversible damages.

However, the interface between research and policymaking has been poisoned by the influence of corporations and individuals opposed to any restrictions on carbon pollution (even ones based on free market principles). Using lessons learned from the tobacco industry’s efforts to deny the dangers of its product, global-warming polluters have poured their vast resources into a long-running campaign of deceit to corrupt efforts to make policy at local, national, and international levels. Today’s global-warming scientists — whose ranks now include field biologists, economists, medical doctors, architects, and genetic ecologists — face intimidation, slander, and even threats of criminal prosecution for their work to illuminate a way to preserve the human experiment on our burning planet.

After Wally Broecker coined “global warming” in 1975, the 1980s followed as the hottest decade on record. The 1990s were even hotter, and the 2000s hotter still — at an increasing rate despite a natural cooling cycle, just as Broecker predicted. The past 12 months have been the hottest in history, bringing continentwide heat waves, freak storms, and unprecedented rains that have devastated millions from Nashville to Moscow, from Oklahoma City to the French Riviera. Having predicted this future, Broecker now investigates potential triggers for abrupt climate change and researches methods to capture carbon dioxide pollution, because, he says, “We are going to need some way to bail ourselves out.”