Why is Pakistan’s president junketing while his people drown? 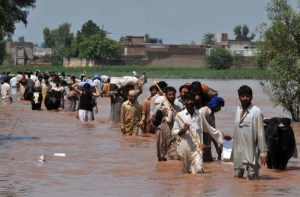 This week, Pakistan’s president, Asif Ali Zardari, boarded a private Gulfstream jet along with his family and his hundreds-large entourage to visit the European countries included on the president’s grand tour. Yesterday, Zardari — who was married to my aunt, the late Benazir Bhutto, before her 2007 murder — landed in London. As soon as the plane touched down, the president and his Very Important coterie were chauffeured in a dozen luxury vehicles to a five-star hotel where the president will be staying in a £7,000 ($11,160) per night Royal Suite.

His welcome, however, was less than royal. On the drive to the hotel, protesters held placards reading “Zardari King of Thieves,” “Zardari 100% Pure Corruption,” and “GO Zardari GO.” While Zardari was schmoozing with his cronies in luxe London hotels, Pakistan was reeling from the deadliest floods to hit the country in 80 years. In short, it looks like Zardari’s Katrina.

More than 3 million people in the northwestern region of Pakistan have now been affected by the floods. Parts of the north are facing terminal food shortages even as they are inaccessible to relief workers. The U.N. World Food Program says that 1.8 million will urgently need something to eat in coming weeks. The death toll has risen steadily in recent days to more than 1,400 people. About another million have lost their homes.

The news is also unlikely to get any better: Officials now say that the waters are expected to hit Punjab and Sindh provinces, Pakistan’s food-producing regions. New flood warnings are still being issued, and the country is bracing for further monsoon downpours.

Zardari takes a lot of overseas trips — so many that one local TV pundit estimated somewhat anecdotally last year that Richard Holbrooke, U.S. President Barack Obama’s special envoy to the “AfPak” region, had spent more time in Pakistan than Zardari had recently. But the timing of this particular visit has angered not only his subjects but also his hosts. Two prominent Asian Britons refused to meet the visiting head of state. Khalid Mahmood, a member of Parliament, vigorously condemned Zardari’s decision to visit London. “A lot of people are dying,” he told the press. “He should be [in Pakistan] to try to support the people, not swanning around in the UK and France.” Lord Ahmed, a labor MP, continued that Zardari had a responsibility to be “looking after people, not [be] over here.”

Yet the protests seem to have fallen on deaf ears — which really shouldn’t surprise anyone who has watched the Zardari government in action. The floods are just the latest, most tragic example of how inept the Pakistani state truly is. The inundation was predictable; Pakistan suffers monsoon rains every year at exactly the same time. But in a country — and with a president — so endemically corrupt, dealing with the entirely preventable, whether terrorism or natural disasters, has become impossible. There is simply no will, and more importantly no money, to spend on the Pakistani people. The country’s coffers are constantly being diverted to more pressing programs — or pockets, for that matter. Before he came to office, Zardari was facing corruption charges in Switzerland, Spain, and Britain. (As president, he withdrew Pakistan’s cooperation with the latter two countries’ courts; his presidential immunity prevented a Swiss case from reopening.)

And thus the tragedy unfolds: There are no emergency evacuation plans for natural disasters, nor is there money for institutions that could help victims of such crises. What there is money for — almost $600,000 — are such programs as the Martyr Benazir Bhutto Income Support Scheme, a cult-of-personality initiative named after the president’s late wife. Those who sign up receive meager cash handouts and find themselves on the president’s ruling party’s election rolls — which themselves received more government funds than two whole federal departments of Pakistan put together.

Meanwhile, if rumors in the Pakistani press are right, Zardari’s European tour is even more cynical than it already seems. The trip is meant to kick-start the president’s young son’s political career. That launch has to take place overseas to avoid the inevitably hostile reactions such a dynastic coronation would draw back in Pakistan. Speculation has it that Zardari’s son Bilawal, a recent college graduate who is already co-chairman along with Zardari of their political party, will proclaim himself the future leader of Pakistan to a select audience in Birmingham on August 7.

Pakistan’s The News newspaper summed up popular sentiment in a laundry list of questions posed to the country’s High Commission in London. “Who is paying for the buses and coaches being booked to bring people to the Birmingham rally?” the paper asks. “Why will the president not cancel his visit?” And the most crucial question: Shouldn’t the money for the trip be better spent on the flood victims? In response, the Pakistani High Commission issued a one-line blanket response: “This is an official visit and procedures for official visits are being followed.”

Pakistan can ill afford a president who prioritizes his personal political future over the lives of millions of his citizens. We have always known in Pakistan that the rest of the world’s attention comes at a tremendously high cost. Yet we seem to keep paying.

Fatima Bhutto is a writer based in Pakistan. Her most recent books are The Runaways, a novel, and New Kings of the World, a nonfiction reportage on global popular culture. Twitter: @fbhutto