Eric Schmidt tells FP what makes a city smart, how not to lose $1 trillion -- and the one place he's never been. 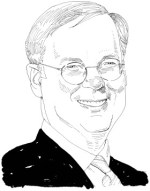 Can there ever be another Silicon Valley, in the United States or anywhere else? What makes it so special?

One thing is the weather. You think I’m joking, but the weather is certainly a part of it.

There can be many Silicon Valleys. It is absolutely a reproducible model; it’s not something in the water. You know, the history starts in the ’50s. What basically happened in Silicon Valley is that you had strong research universities, a relatively liberal and creative culture, lots of reasons for young people to stay in the area — and young people are the ones with the new ideas. Then you had the development of the venture capital industry.

What’s interesting is that every 10 years someone writes an article about how Silicon Valley was responsible for the last innovation wave, but it will miss the next wave. Yet Silicon Valley has now been at the forefront of four or five successive tech waves and has proved itself remarkably resilient because of the combination of the universities, the culture, the climate, the capital. My point is that if you have all of those elements, you can have your own Silicon Valley wherever you want.

If Google weren’t located in Silicon Valley, is there anywhere else you’ve visited that you can imagine it could be located in — or any places that remind you of Silicon Valley around the world?

That’s a very hard question to answer. Most would argue that Cambridge, England has a lot of the criteria — there’s been an explosion of start-ups there. Another scenario would be New York City. Obviously it does not have the weather, but it has the draw for young people and certainly the financial sophistication; plenty of smart people and the sense of globalization are very important. It’s unlikely that would occur in a place that does not see itself in a global context. The Bay Area, because it’s a gateway to Asia, has always seen itself in a global context.

Shanghai could do it, although in China the universities are strongest in Beijing. Shanghai isn’t quite the New York of China, but it could be. Bangalore emerged as a tech hub in India in part because of favorable weather, a strong university system, and concerted support by the state government. So there are partial versions of that happening.

How is information technology changing the world?

When I was growing up, an elite controlled the media. And the majority of the world was very, very poor, both in a resource sense and an information sense. Since then, a set of things have occurred: the digital revolution, the mobile revolution, and so forth — of which I am enormously proud because they are roughly the equivalent of lifting people from abject poverty and ignorance to a reasonable ability to communicate and participate in the conversation.

Information empowers individuals. And it has a huge and overwhelmingly positive impact on society. Think of someone who can now get information about finance or technology, or they’re in school and they can’t afford textbooks but access information online. Or imagine medicine — I mean there’s just issue after issue.

Globalization has clearly been responsible for lifting at least 2 billion people from abject poverty to extremely low levels of middle class. As a result, they have greater access to education and opportunity; they are much less likely to attack you, and they’re busy trying to fulfill their low-cost version of the American Dream. They’re trying to buy a car.

I am worried about the decline of what I call deep reading. In other words, the sort of “here I am on the airplane, there’s no Internet connection, I am reading a book thoroughly” reading. You do less of that in a world where everything is a snippet, everything is an instant message, everything is an alert.

What are you reading right now?

What is one place in the world that you have never visited but you would like to?

You cannot eliminate all risk, but you can certainly put yourself into situations where the failures are not horrific. In other words, fail early. Fail early in a small team before you have devoted $20 billion to something. If 10 people fail, maybe you have lost their time and a couple million dollars, but if a space shuttle blows up and the whole thing is a disaster, you have lost a trillion dollars.

How does innovation happen?

Real insights don’t come out of linear plans; they come from collecting ideas and thinking about things and then all of the sudden — creativity occurs on Saturday morning when you least expect it.

Illustration by Joe Ciardiello for FP

Christina Larson is an award-winning foreign correspondent and science journalist based in Beijing, and a former Foreign Policy editor. She has reported from nearly a dozen countries in Asia. Her features have appeared in the New York Times, Wired, Science, Scientific American, the Atlantic, and other publications. In 2016, she won the Overseas Press Club of America’s Morton Frank Award for international magazine writing. Twitter: @larsonchristina
Tags: Business, Cyber Security & Hacking, Economics, Science and Technology
Latest