How Medvedev's vaunted liberalism went up in flames.

View a slideshow of Russia's wildfires.

When your country, simmering for days in record-breaking heat, suddenly bursts into flame in 831 places, destroying half a million acres of land, killing 52 people, blanketing your capital in toxic smoke, and threatening to release old Chernobyl radiation into the atmosphere, someone has to take charge. If you're the Russian president, however, you will not be that person. You will sit in your office while your prime minister, his sleeves rolled up the way men of action tend to roll them up when they mean business, goes and tours the devastation, talks to grieving villagers, and shows the country that, hey, he's on it. 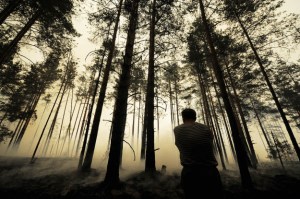 View a slideshow of Russia’s wildfires.

When your country, simmering for days in record-breaking heat, suddenly bursts into flame in 831 places, destroying half a million acres of land, killing 52 people, blanketing your capital in toxic smoke, and threatening to release old Chernobyl radiation into the atmosphere, someone has to take charge. If you’re the Russian president, however, you will not be that person. You will sit in your office while your prime minister, his sleeves rolled up the way men of action tend to roll them up when they mean business, goes and tours the devastation, talks to grieving villagers, and shows the country that, hey, he’s on it.

After the warm Moscow-Washington spring we’ve had, one would be forgiven for believing the conventional wisdom: that the aggressive, unpredictable Russian Prime Minister Vladimir Putin is relaxing his hold on the reins a bit, and that President Dmitry Medvedev, the shy liberal, is finally coming into his own. The events of the last week, however, have served as stark reminders of who really is in charge — and how empty the promises of Medvedev’s modernization pitch actually are.

First came the Minority Report law. Under the proposed policy, which came tucked into broader legislation designed to help Russian security forces fight terrorism, the Federal Security Service (FSB) would be able to issue warnings to people they thought were heading down the road to committing a crime — possibly by throwing them into jail for 15 days.

When the law was introduced, people hoped that Medvedev the Liberal would step in and show Russians and the world that his country had gone beyond the point of punishing its citizens for acts not yet committed. Human rights activist Lev Ponomarev told the New York Times he hoped that Medvedev would show “the courage to oppose this bill.” It would, Ponomarev said, win him much credibility and loyalty in liberal circles.

But then Medvedev cleared it up for everyone. Speaking at a press conference with Angela Merkel in Ekaterinburg on July 15, he said that not only would he sign it, but that he had initiated it. “The situation is extremely simple,” the president said. “I don’t really want to comment now on the changes in the legislation that are currently underway. But … first I’d like to draw your attention to the fact that this is our internal legal system, and not an international act. Second, every country has the right to its own legal system, including its own intelligence agency. And we will do this. And what’s happening now — I want you to know — is being done on my direct instructions.”

His statement was a tremendous disappointment, even to the president’s own men. Gleb Pavlovlovsky, who runs a think tank closely linked to Medvedev and who helped Putin get elected in 2000, sounded mournful, even doubtful, when he tried to explain the point of the new law to me. “The arguments of the law’s supporters are that it comes from a liberal idea, ‘Let’s not always open a case, let’s non-repressively warn people instead,'” he said. Sighing, he added, “Unfortunately, these amendments” — the provisions allowing the FSB to warn people before a crime is actually committed — “reintroduce an old Soviet idea of the role of the security forces and changes the concept of the law, implicitly supposing a quasi-judicial function for the FSB. These amendments carry the danger of informally expanding the powers of the FSB.” Luckily, in the final version of the law, signed on Thursday, July 29, some of the provisions were made more vague — and perhaps less enforceable — and the one allowing the FSB to publish the warning in the media was removed entirely.

That was the first thing.

The next blow came the day after the bill was signed into law. That Friday morning, news broke that Ella Pamfilova, head of the President’s Council on Civil Society Institutions and Human Rights, had abruptly resigned, giving no reason for her sudden exit. Pamfilova said she would “only say that I am planning to change the area of my activity drastically, and it will definitely be neither politics nor public service.” She sounded exhausted and bitter, and despite pleas from the human rights community — which sees the council as important, even if just as window-dressing — Medvedev made a show of accepting her resignation.

In effect, however, Pamfilova was forced out. Just before her resignation, she had criticized Nashi, the pro-Kremlin youth group that festooned its summer camp with vicious propaganda, putting the heads of prominent journalists and human rights defenders on sticks and Wermacht caps on their heads with the sign, “You’re not welcome here.” Speaking on a radio show, Pamfilova bemoaned the “ugly youth politics” that bent kids toward fascism and sought to “make them into little tin soldiers who can do anything on command.” “I am scared that these kids will begin coming to power in a few years,” she said. “It’ll be a doozy. This is the scariest thing. Because these fosterlings of some of our political technologists are selling their souls to the devil, to put it bluntly. They burnt books” — they didn’t — “I don’t remember, but I think they burned an effigy. What’s the next step? … Will they make their way toward people next?”

Three days later, Nashi was suing for libel and Pamfilova was gone.

This was not her first run-in with the satanic fosterlings. Last fall, Pamfilova publicly chastised Nashi for “persecuting” a journalist who had written an article the group felt was critical of veterans (it wasn’t). She refused to apologize, and several members of Putin’s United Russia party tried to have her dismissed. She was not well-loved in the circles of power. Shortly before her resignation, Alexei Chadayev, the party’s political department head, had lashed out at her on his Twitter account, calling her a “star of agitprop,” “hysterical,” and a “ghoul.”

Clearly, Pamfilova had stepped on some powerful toes, and her ouster had a sacrificial tone to it. “She had many enemies,” says Pavlovsky. After the high-profile death of lawyer Sergei Magnitsky last year, Pamfilova publicly pressured Medvedev to take action and reform Russia’s horrific prison system, antagonizing people in the Interior Ministry. As for the anti-Nashi statements, Pavlovsky told me, “Ella is very easily emotionally charged by the public mood, even if it is not based in fact.” He added, rounding off the theme of the hysterical woman lost in a man’s world, “She’s not a natural apparatchik fighter. She’s not a jedi.”

(When I called her for comment, Pamfilova insisted she had not been forced out. “I am not the kind of person that tolerates pressure,” she said. “If I wanted to stay and fight, I would’ve stayed and fought. It’s more of a fundamental question about the politics of the development of this country. President Medvedev expressed his wish that I stay, but it’s important to me what form this takes.” For now, she is on vacation. “I am completely exhausted by what has happened.”)

Throwing Pamfilova under the bus was yet another concession on Medvedev’s part to the Putin faction of chest thumpers, the more traditional coalition inside the Kremlin that still needs to balk and talk tough and, yes, thump its chest. Which brings us up to the tandem’s response to the unprecedented fires in European Russia. As Medvedev sat in his office and fired five officials for letting a naval aviation base outside Moscow burn down, Putin was with the people, showing them that he was looking out for them, that he was their leader.

Touring the destruction around Voronezh Wednesday, Putin — in a masterfully artificial charade — put in a phone call to his president, a call that was of course just coincidentally caught by the biggest state-owned TV channel. “Yes, Vladimir Vladimirovich,” says Medvedev from his ornate office, looking down, rapping his fingers on his desk. “Hello again. So, what’s going on?” “The situation is difficult,” Putin says, furrowing his brow and looking around as one does when speaking on a cell phone. It takes a few minutes of dense bureaucratic-speak — you know, your average cell-phone conversation — of Putin to tell Medvedev, in his office, removed from the people, what he needs to do, which is to rubber stamp what Putin tells him should be done, given his superior vantage point on the ground: increase the firefighting capacity, make the compensation process faster. Because nothing says equality like giving your partner a “to do” list.

Julia Ioffe is a contributing writer to Politico Magazine and Huffington Post's Highline. She was a senior editor at the New Republic and was the Moscow correspondent for Foreign Policy and the New Yorker from 2009 to 2012.
Tags: Economics, Law, Liberalism, Russia