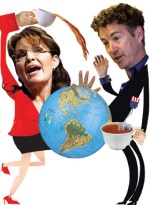 When tens of thousands of Tea Party activists gathered for a rally on the National Mall in Washington this spring, they loudly cheered the economic populism of their hero, Ron Paul, the Texas congressman who fell short in his quixotic 2008 presidential bid while inspiring a movement that outlived his candidacy. But then he shifted to international affairs, speaking against foreign aid and policies that make America the world’s policeman.

By the time he began complaining about the many U.S. military bases overseas and arguing for bringing the troops home from places such as Japan and South Korea, some in the crowd were growing agitated. As journalist Kate Zernike recounts in her forthcoming book, Boiling Mad: Inside Tea Party America, people toward the back objected. “God bless the military!” some hollered. Paul quickly moved on to a pitch for keeping the U.S. military strong — and the hecklers began cheering again.

It was a revealing moment for a movement born at a time of two overseas wars, a continuing terrorist threat, and a looming confrontation with Iran. For though the Tea Party may have captured the energy and imagination of this American political season, it very decidedly owes its campaign appeal to domestic politics, tapping into economic anxiety and visceral antipathy to what it considers President Barack Obama’s big-government program. When it comes to foreign policy, the unity of the Tea Party stops at the water’s edge.

Its leaders are hopelessly divided over everything from the war in Afghanistan and counterterrorism policies to free trade and the promotion of democracy abroad. And with the Tea Party increasingly serving as the Republican Party’s driving force, the schism underscores the emerging foreign-policy debate on the American right. So recently united behind President George W. Bush’s war on terror, Republicans now find themselves splintering into familiar interventionist and isolationist factions, the Dick Cheney side of the party eager to reshape the world versus the economic populists more concerned about cutting taxes at home than spending them on adventures abroad.

“If the Tea Party movement expanded into that area, you’d find a multitude of opinions,” says Frank Anderson, co-founder of the Independence Caucus, an anti-incumbent group that endorses congressional challengers who promise to respect its credo of limited government. “If you ask any 20 people, you would get 25 opinions.”

If there’s one thing Tea Party activists can agree on foreign-policy-wise, it’s their aversion to international organizations. Of 80 questions posed to candidates by Anderson’s Independence Caucus, only four relate to foreign policy, and all those are about ceding sovereignty to the United Nations or international treaties. Question 16, for instance, asks candidates to oppose efforts “to recognize or implement any United Nations actions, decrees, or programs that would interfere with or supersede our sovereign national government.” No wonder once-and-future presidential candidate Mitt Romney denounced Obama’s arms-control treaty with Russia.

The two most famous Tea Partiers, in fact, are at the opposite ends of the foreign-policy spectrum. Where Sarah Palin, the 2008 vice-presidential candidate with her eye on 2012 and her muscular talk of a movement of “Mama Grizzlies,” embraces Bush’s assertive foreign policy, Rand Paul, the son of the Texas congressman, extends his dad’s don’t-tread-on-me philosophy at home to mean don’t tread on others abroad.

Palin has argued against extending Tea Party enthusiasm for budget cuts to the military, and another movement favorite, Marco Rubio, the Republican senatorial candidate from Florida, has ripped Obama for not being tough enough. “Today, our nation’s foreign policy appears to be based on abandoning our friends, appeasing our enemies, and retreating from our responsibilities,” Rubio said in one speech. Paul, on the other hand, crushed the establishment favorite in Kentucky’s GOP primary after a campaign in which he called the Bush-era Patriot Act “a mistake” and issued a statement promising to “oppose reckless ‘nation building’ or burdening our troops by making them the world’s police force.”

The Tea Party, in other words, is stumbling over a familiar divide on the American right. Nearly a century ago, the big-stick foreign policy of Theodore Roosevelt turned inward when Henry Cabot Lodge blocked U.S. entry into the League of Nations, and isolationists held sway until World War II. At the end of the Cold War, the most internationalist of modern presidents, George H.W. Bush, had to beat back Patrick J. Buchanan’s neo-isolationist insurgency. In the 1990s, resurgent congressional conservatives were just as divided over President Bill Clinton’s embrace of humanitarian interventionism. When Clinton waged war in Kosovo in 1999, House Majority Whip Tom DeLay complained that he “was involving the U.S. military in a civil war in a sovereign nation,” but other Republicans rushed to Clinton’s defense.

That schism might be reopening now in a way that threatens to fracture the Republican Party just as it regains political traction. In July, when Michael Steele, the party’s gaffe-prone chairman, derided the Afghanistan conflict as “a war of Obama’s choosing” that might be unwinnable, he drew instant condemnation from figures like Sen. John McCain, Liz Cheney, and William Kristol. Steele quickly retreated, which seemed to show just how thoroughly the hawks have come to dominate the modern GOP.

Yet perhaps the reaction was so swift out of fear that the old fissures would crack the party. After all, Steele’s apostasy resonated with some on the right who are not sure why the United States should be investing American treasure and lives in dusty, far-off lands. A handful of Republican congressmen, led by Jason Chaffetz of Utah, an early Tea Party hero, voted with Democrats this summer in an unsuccessful attempt to limit the Afghan mission.

The broad mass of Tea Party voters might even be up for grabs in this debate. Consider Mike Lee, the Tea Party darling who toppled Sen. Bob Bennett at Utah’s Republican convention. In an interview, Lee acknowledged he was more “halting” on foreign than domestic affairs. He criticized Obama for his Middle East policy (“they’re meddling too much in the internal affairs of Israel”) and his arms-control treaty with Russia (“I don’t think we ought to be handcuffing ourselves”). But he also repudiated Bush’s ambition to spread democracy abroad. “Sometimes our military efforts outside the United States can have that effect, and that’s great,” he said, “but I don’t think that ought to be the focus. It’s too broad.”

In identifying a guiding philosophy on international affairs, Lee, like other Tea Party figures, points to Thomas Jefferson’s warning against “entangling alliances.” The question for the movement is whether it can maintain its own uneasy coalition. And for now, at least, that means steadfastly ignoring foreign-policy declarations of any sort. When nearly half a million Tea Party supporters voted online to define their campaign agenda, not a single one of the 10 planks they agreed on had anything to do with the world beyond America’s borders.