The Beginning of the End

The U.S. combat presence in Iraq is over, and it is likely all troops will be gone by the end of next year. But strong support will still be needed in the weeks and months to come, lest the country slip back into chaos and conflict.

On Thursday, the last U.S. combat brigade to leave Iraq crossed into Kuwait, fulfilling President Barack Obama's pledge to withdraw all but 50,000 American troops from a country with which the United States has become intimately, and painfully, familiar over the last seven and a half years. 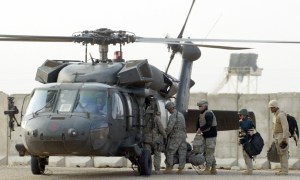 On Thursday, the last U.S. combat brigade to leave Iraq crossed into Kuwait, fulfilling President Barack Obama’s pledge to withdraw all but 50,000 American troops from a country with which the United States has become intimately, and painfully, familiar over the last seven and a half years.

The remaining soldiers and marines will stay in Iraq until Dec. 31, 2011, for training and other support purposes. Although the possibility cannot be ruled out, it seems quite unlikely that their presence will be extended beyond the 2011 deadline. Political imperatives in both Iraq and the United States seem to work against this possibility, even though there are those in both countries who argue that a longer-term U.S. residual force is needed.

Having landed in Baghdad as U.S. ambassador to Iraq at the end of June 2004, I find it a truly remarkable and positive accomplishment that we are able to look to the day not too far off when Iraqi security forces will be able to assume full and complete responsibility for their country’s security. At the time of my arrival, Iraqi security forces were, for all practical purposes, nonexistent. There was, for example, only one — yes, one — Iraqi army battalion and it was composed of various ethnic and sectarian elements. Today, there are some 600,000 Iraqi security forces and important strides have been made toward giving Iraq’s security organizations a national rather than partisan character. This is no small achievement; it has taken seven years to accomplish and only after some false starts and perilous moments.

In the wake of the Samarra Mosque bombing in 2006 and the ensuing sectarian strife, those of us concerned with Iraq could not have imagined the dramatic reversal of fortunes that would occur in the ensuing two years — the death of al Qaeda in Iraq leader Abu Musab al-Zarqawi, the liberation of Basra by the Iraqi army, and the extension of the government’s authority to the country as a whole. By 2008, these improvements had given the government of Iraq the necessary self-assurance to negotiate the withdrawal arrangements that are now being implemented.

But can Iraq really remain stable once U.S. troops have completely withdrawn? While there are no guarantees, the prospects for Iraq’s security and stability beyond 2011 look as good or better than they have at any time in the recent past. The Iraqi army now has close to 200 trained combat battalions, a formidable increase from the somber days when I arrived in 2004, and they are spread throughout the country. The specter of sectarianism poisoning the ranks of Iraqi military and police forces remains the single most serious threat to be guarded against. But progress since the 2007 surge in nurturing the army and police as truly national institutions has been encouraging. Vigilance and political maturity will be needed to ensure that this positive trend continues.

If our military role in Iraq ends soon, as it most likely will, then what will be the glue that holds our two countries’ relationship together? For one thing, the United States intends to maintain a robust civilian diplomatic and developmental presence in Iraq for the foreseeable future — so as not to jeopardize the hard fought gains of the last seven years. The sending of senior diplomat James Jeffrey to Baghdad is a signal of continued high-level interest and concern for the stability and well-being of Iraq. But this signal needs to be reinforced by congressional support for the funding requests that have been submitted for programs in areas such as technical assistance, rule of law, poverty reduction, women’s issues, and economic development. And we need to continue efforts to encourage U.S. private-sector involvement in Iraq’s economy. Last, but certainly not least, our reduced military profile will place an even higher premium on proactive regional diplomacy. While the focus of U.S. military efforts abroad has now shifted irrevocably toward Afghanistan, falling short of our diplomatic and funding commitments to Iraq risks allowing the country to slip back into conflict and chaos.

But can the steadying influence of U.S. diplomacy on the Iraqi political process can be maintained as our military presence diminishes? It’s hard to say, but it was inevitable that sooner or later this aspect of our relationship also had to be normalized. Just as in the transition from occupation to full sovereignty Iraq is assuming responsibility for its security, so too must it take complete ownership of its own political arrangements. The achievement of a parliamentary democracy in Iraq so soon after the demise of a long-entrenched dictatorial regime is a remarkable accomplishment. That’s not to say that the current situation, with the recent spike in suicide bombings and a continued stalemate in forming a government since the March elections is ideal, but there has been real progress. A continued U.S. civilian presence will be a strong encouragement to that process, but the days of backroom political deals brokered by the U.S. Embassy in Baghdad will be fewer and farther between.

That doesn’t mean the United States won’t remain critical to Iraq’s future. Too often in the past we have tired of an international undertaking when our military role has finished and “our boys have come home.” We should not underestimate the effect that a continued demonstration of interest and concern can have on Iraq’s future. It is important that not only Iraq but the region as a whole understand that this long-suffering country continues to enjoy strong American support. A properly endowed U.S. government civilian presence in Iraq can help preserve the gains of the past seven years and help avoid a repeat of the instabilities of the past.

John D. Negroponte is a James R. Schlesinger distinguished professor at the Miller Center for Public Affairs at the University of Virginia. He was U.S. deputy secretary of state from 2007 to 2009, and he was the first ever director of national intelligence from 2005 to 2007.

NEW FOR SUBSCRIBERS: Want to read more on this topic or region? Click + to receive email alerts when new stories are published on U.S. Foreign Policy, Security, Economics