Could the U.S. mission in Afghanistan fall apart simply because of bad translation?

At one point in Restrepo, a new documentary film about U.S. soldiers at a small combat outpost in eastern Afghanistan's Korengal Valley, Captain Dan Kearney, the officer in command, is sitting in a shura with the Korengal elders he is trying to win over. A frail-looking man sits before the bullish captain and complains about the arrest of a local man. Kearney at first does not know who the elder is talking about. Then Kearney turns to his Afghan interpreter, or "terp," and in answer to the elder says: "You're not understanding that I don't fucking care." 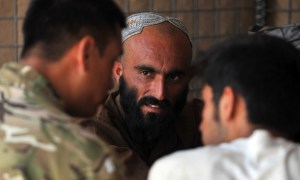 At one point in Restrepo, a new documentary film about U.S. soldiers at a small combat outpost in eastern Afghanistan’s Korengal Valley, Captain Dan Kearney, the officer in command, is sitting in a shura with the Korengal elders he is trying to win over. A frail-looking man sits before the bullish captain and complains about the arrest of a local man. Kearney at first does not know who the elder is talking about. Then Kearney turns to his Afghan interpreter, or “terp,” and in answer to the elder says: “You’re not understanding that I don’t fucking care.”

The F-bomb is called that for a reason: It has power to explode a conversation and obliterate important points. But my main question after watching this scene, so similar to many I’ve witnessed while reporting on America’s wars abroad, was: How is an interpreter, even a very good one, supposed to haul that statement into his own language? Translation is such an everyday act that it is routinely omitted from most discussion of strategy and success. But, badly done, it is fatally dangerous. And the messages lost through faulty translation in Afghanistan are sabotaging the mission there as badly as any physical enemy ever could.

U.S. troops rely on translators. There is no alternative. On the battlefield and in the shuras, young officers like Kearney, raised in the get-down-to-business culture of America and its military, often express themselves to their translators directly and with heaps of slang, roughly the way they might talk to a college buddy. The terp is then expected to decide not only how to translate the words but also how to bridge the gulf of propriety and custom. But although this colloquial language is informal, it is still complex. And unfortunately, it assumes even more common background and idiomatic understanding than a more formal diction would: Think of phrases like “man up,” “freedom isn’t free,” or even “shoulder responsibility” and “build your nation.” In the best circumstances, the most successful shuras, it would be unrealistic to expect all this meaning to pass intact to a group of old men from another world. Try filtering it through a translator who didn’t attend college, was never your buddy, and didn’t grow up surrounded by phrases Americans take for granted, and the chances for error or insult multiply rapidly.

This winter, I spent a month in the Pech Valley, next door to the Korengal, where Restrepo was filmed. There, and in other regions of Afghanistan, I met some pretty good terps who were able to develop the kind of rapport with the Americans that’s crucial in understanding language and intent. Many, however, were only partially educated and only passable at their jobs. Quite a few were simply very bad. Language is far more than vocabulary and grammar — it is culture. Often terps weren’t familiar enough with either to understand what the Americans were saying or what it meant. And choosing candidates for this crucial job is often relegated to contractors. When I asked officers why they worked with bad terps, they claimed they didn’t have much choice; translators are hired by private companies and bad ones are difficult to replace, partly because demand is so high and the vetting process is slow.

The effect of bad translators on the Afghan mission is difficult to estimate — but I believe that it’s vast. Terps have a different stake from the Americans in the outcome of the war, and by definition they’re working with people who can’t understand half the things they say, meaning that there’s no accountability if they’re translating an English message into something totally different. I once asked the lieutenant colonel in charge of the Korengal Valley how many messages he thought were lost this way. I wagered that at least 40 percent of his troops’ words were not getting through to Afghans. He thought it was more like 50 percent. At the time, January 2010, his soldiers were literally delivering U.S. President Barack Obama’s new strategic message to Afghans. I watched them announce that the United States would soon begin withdrawal and that Afghans needed to take responsibility for their own future. If half that message were lost in translation, which half would you want it to be?

In another Restrepo scene, Captain Kearney tries to explain to a group of Korengali elders that he is not like the captain who preceded him; that he, Kearney, will do things differently, kill fewer civilians, and bring wealth and jobs and progress. He says he wants a “clean slate.” That Christmas list of opportunities may or may not have been important to the Korengalis; that’s a story for another time. But how did “clean slate” translate to men who remember insults for decades, in a land where grudges weave through generations? What did the terp actually say to the elders?

Whatever he told them, Kearney never won his fresh start. Before dialogue could be reset, the killing intensified, covering the slate again with blood, as Restrepo shows. American troops withdrew from the Korengal valley this spring.

Last December, I went on many foot patrols in the valleys along the Korengal as Americans traveled village to village bringing pieces of Obama’s message. One day, high on a mountainside, I listened to a young lieutenant explain to a toothless elder that he needed to take a stand against the Taliban.

“You are a citizen of Afghanistan,” the lieutenant said. “This nation is your responsibility.” He was tense, already expecting a Taliban attack. Another lieutenant chimed in: “You need to form something like, you know, a neighborhood watch.”

The terp looked at both officers, then said something to the old man, who merely stared at them. Later I asked the terp if he knew what the word “nation” meant.

“It’s, it’s …” Then he shrugged and smiled and gave up. Maybe he just couldn’t define it. I’m sure he had no idea what the words “neighborhood watch” meant.

I imagined this scene replicating like a virus through the countryside, through the hundreds of small units operating in the mountains, on the plains. Occasionally I asked the soldiers how they believed their messages would ever take hold. The standard answer was that it was all about “repetition, repetition, repetition.” Say it enough times and the Afghans will get it. That might work. But if no one understands the words, the Americans will simply be bludgeoning the Afghans with noise.

Rich countries are pursuing energy security at the rest of the world’s expense.