From Pakistan's floods to Russia's wildfires to the United States' oil spill, 2010 has been an unusually bad summer for disasters, natural and otherwise -- enough so that plenty of enormous catastrophes, or just plain weird ones, have had to fight for headlines. Here's FP's list of the disasters you missed.

What: Indonesia ranks second only to Bangladesh in countries at “extreme risk” for natural disaster. This week, a long-dormant volcano in northern Sumatra proved it by erupting twice, killing two people and displacing 30,000 more, while spewing volcanic ash more than three miles into the air for six hours.

So far, the ash has only deferred some small domestic flights; larger planes are able to fly over the cloud. Officials are concerned, however, that if the eruption continues, the smoke could further disrupt aviation. Sumatrans have been evacuated from a four-mile radius around the volcano, and aid workers have distributed 8,500 face masks to protect people from the fumes. 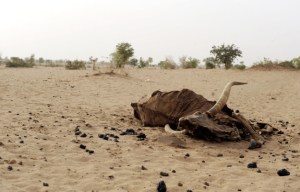 What: Heavy rains have caused severe flooding throughout Africa this summer, and both Chad and Ethiopia are in dire straits. But the hardest hit have been West African countries along the River Niger, which is at its highest level in over 80 years, according to the BBC. Worst off is Niger, where more than 110,000 people are homeless.

Niger was already in bad shape before the floods started in early August. A prolonged drought has left about seven million people — half the country’s population — facing starvation. The floods have, predictably, not made things much better, and at least six people have died in the heavy rains. The U.N. has been distributing food, medicine, tents, and mosquito nets, but says that most needs “have still not been met.” Right now, the U.N. is only able to feed 40 percent of those in need.

LANDSLIDES AND FLOODS KILL OVER 1,000

What: Pakistan’s devastating deluges may get all the coverage, but China’s worst flooding in a decade has led to severe mudslides and billions of dollars in damage. In Gansu province, the death toll was more than 1,200 after landslides buried buildings and streets in mud. According to the Associated Press, thousands are still missing in this remote area of northwestern China. Tens of thousands more have been evacuated. The BBC reports that 66 percent of Zhouqu county lost power and many survivors are now living in tents, pitched precariously on unstable slopes.

Across the country, 28 provinces and 140 million people have been affected by flooding. The newest area of concern is on the North Korean border, which consists of the Yalu and Tumen rivers in Jilin province, where 74 people have been killed. The impact of floods remains mostly unknown in North Korea, which in addition to its well-known problems is also particularly vulnerable to flooding because of deforestation. South Korea has even offered Pyongyang millions in flood aid — the first such assistance since it accused Kim Jong Il’s regime of sinking the Cheonan warship in March.

Earlier this month, China declared a national day of mourning for flood and landslide victims, a rare occurrence in the country and the second this year, following the commemoration of the victims of April’s Yushu earthquake.

What: Rain this year finally brought an end to what was Syria’s third year of drought, which has caused about 800,000 people to lose “almost all of their livelihoods and face extreme hardship,” according to a U.N. report. But U.N. officials say the rain hasn’t been enough to save this year’s harvests. Abdulla Tahir Bin Yehia, head of the Food and Agriculture Organization in Syria, says the country is facing “crop failure.”

By some estimates, as many as 800,000 to one million Syrians have been displaced in what the BBC is calling a “rural exodus,” with farmers abandoning their lands for makeshift camps on the outskirts of cities. In June, the World Food Program distributed rations to nearly 200,000 people, but WFP officials said that a lack of international funds meant it was unable to distribute food aid to all who needed it.

What: This summer, the United States battled the aftermath of the largest offshore oil spill in the nation’s history, and so did China. The two pipelines that exploded on July 16 in the Yellow Sea, near Dalian in Liaoning province, only hemorrhaged a small fraction of the oil that BP’s Deepwater Horizon did. But by the time China declared the spill contained later that month, that still may have amounted to as much as 90,000 tons of oil, according to one expert (the Chinese government’s estimate was at a much lower 1,500 tons).

Accurate information about the spill is hard to come by, but what we know of the picture is pretty grim. The spill spread over 165 square miles and posed a serious threat to both sea life and water quality. One firefighter drowned in the crude while trying to fix an underwater pump. Greenpeace Chi
na released a particularly ugly set of photos documenting the cleanup effort, showing workers swimming in the thick oil without protective gear.

While city hospitals were flooded with people suffering from food poisoning and heatstroke, most casualties were found in remote rural villages. Wildlife and livestock also suffered — in Uttar Pradesh, for example, dozens of peacocks were reported dead due to dehydration at a forest reserve.

What: It’s not quite a natural disaster on the order of Niger’s drought or China’s mudslides, but the wave of jellyfish that attacked the Spanish coast in early August was ominous nonetheless — and another harbinger of humanity’s growing impact on the planet. Hundreds of people were stung along the Mediterranean Costa Blanca over three days in a two-pronged gelatinous attack: a vast force made of transparent and tiny jellyfish spread along three miles of coastline, stinging vacationers, while further north the dreaded Portuguese Man of War plagued beaches with its three-foot-long tentacles.

Scientists attribute the jellyfish glut to global warming and Mediterranean fishing that kills the creature’s natural predators, upper-food-chain species like tuna and swordfish.

Where: Hawaii and Brazil

What: If the floods, fires, and odd wildlife plagues weren’t Biblical enough for you, how about a genuine pillar of flame? A brushfire on Hawaii’s Big Island took a decidedly epic turn (or two) this weekend when strong winds created a “fire tornado,” which is pretty much exactly what it sounds like: a swirling vortex of flame, vividly captured on tape here.

The brush fire continues to rage, but has not caused any casualties despite burning about 1,400 acres so far. One of the last times a fire tornado made major headlines was in 1981, when one killed a 6-year-old boy in Riverside, California.

Last week, newscasters reported on another fire tornado in the Brazilian municipality of Aracatuba in Sao Paulo state, provoked by this summer’s unusual aridity. The state’s humidity levels are on par with the Sahara desert; it’s been about three months since the last rain.

NEW FOR SUBSCRIBERS: Want to read more on this topic or region? Click + to receive email alerts when new stories are published on Economics, Environment