It's too late for the Castros to create a market economy. 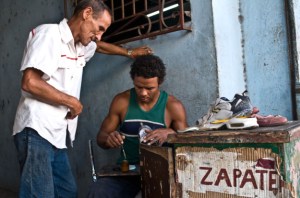 View a slide show of working in Cuba.

Last month, the Cuban government said it planned to fire 500,000 state employees, and perhaps over 1 million, saying “our state cannot and should not continue supporting… state entities with inflated payrolls, losses that damage the economy, are counterproductive, generate bad habits, and deform the workers’ conduct.”

Some heralded the announcement as a long-awaited sign that Havana under Gen. Raúl Castro is finally moving toward a market economy, others voiced substantial skepticism, and Marxists denounced it as a betrayal of communist orthodoxy. So, where is Cuba headed?

Most likely, nowhere fast. Far from being a hopeful indication that Raúl is serious about economic reform, the abrupt layoffs reveal a government that is simply desperate to make ends meet. And they offer yet more evidence that Cuba, one of the last countries in the world to cling to Joseph Stalin’s bankrupt ideology, is not interested in joining — or, to be charitable, does not know how to join — the globalized, 21st-century world.

Ironically, the official announcement of the firings was made by the Cuban Workers Union — the labor union controlled by the Communist Party. Anywhere but in repressive totalitarian regimes, the dismissal of 10 percent of all government workers would have been met with massive protests. But this is Cuba, where even though about 85 percent of the workforce of 5 million is employed by the state, there was nary a peep on the streets.

The announcement, couched in typical Orwellian doublespeak, raises more questions than it answers. “It is necessary to revitalize the socialist principle of distribution and pay to each according to the quantity and quality of their work,” it read, a blundering contradictory attempt to tie the layoffs to Karl Marx’s socialist maxim, “from each according to his ability, to each according to his needs.” The government also said it would grant permits for those fired to seek to make a living “outside the state sector” as if it is unspeakable to talk of a private sector.

In Cuba, a state permit is required even to shine shoes — along with 178 other private economic activities that include mostly individual service activities from baby-sitting to washing clothes. It is also unclear exactly how those selected for dismissal will be chosen; seniority, patronage, friendship, ideological purity, or some form of capitalist or socialist merit? Will race or gender play a role in these massive firings? Will the dismissals disproportionately target those who receive remittances from abroad? Perhaps more important, how are those fired supposed to find jobs? In an economy with developed private competitive markets, employees dismissed from one firm have a fighting chance of securing employment in another. But in Cuba’s economic system, the government controls most economic activity. There is no private sector to absorb the unemployed. Where will they find employment?

Perhaps most bizarre is that the dismissal measure seems to assume that everyone is temperamentally suited to be an entrepreneur and make a living in fields that might be far from his or her work experience and professional training. The Cuban government is betting on the resourcefulness and entrepreneurship of the Cuban people to somehow make up for the inefficiencies of the state sector and do so without access to cash, credit, raw materials, equipment, technology or any of the inputs necessary to produce goods and services. Ironically, the most likely source for these inputs will be the Cuban diaspora, which will be eager to help its unemployed relatives and friends. Manuel Orozco, a remittances expert at the Washington-based think tank Inter-American Dialogue, underlines that, telling Reuters, “Liberalizing the economy could lead to 10 percent of Cubans receiving remittances to invest in small businesses.”

This could be a motivation for the Cuban government to disproportionately target remittance-receiving workers for dismissal. Cubans will somehow make do, but in terms of actual economic development, these measures will not work; they are not designed to. Allowing Cubans to baby-sit or make paper flowers for sale to tourists are not serious economic development measures. But just in case, hoping to capitalize on any additional economic production, the government is ready to collect onerous taxes of 25 percent for social security and up to 40 percent on income depending on the economic activity (e.g., food production will be taxed at 40 percent, artisans at 30 percent, etc.).

The government is projecting a 400 percent increase in tax revenues, presumably to be collected from the fired employees turned entrepreneurs. More likely, Cubans will find ways to avoid paying taxes by relying on the black market for these economic activities. Cuban economist and dissident Oscar Espinosa Chepe writes from Havana of the impact of Cuba’s economic situation on civil society: Cuban children, he tells us, grow up witnessing how their parents, obligated by circumstances, live by theft and illegality.

Because Cubans cannot live by the results of their legitimate labors and work has ceased to be the principal source of one’s livelihood, a survival ethic has evolved that justifies everything. One lesson to be learned from the transitions in the former Soviet bloc is that the success of reforms hinges on placing individual freedoms and empowerment front and center. In the decade following the collapse of the Soviet Union, the most successful transitioning countries were those that embraced political rights and civil liberties decisively: the Czech Republic, Estonia, Poland, Slovenia, East Germany, and Hungary. This is not where Cuba is headed with its “actualization of socialism.”

The main reason is Cuba’s Stalinist political order, which remains unchanged by this announcement. In a system that denies basic freedoms, society is debilitated and corrupted by a miasma of fear. For five decades, fear has been an integral part of the everyday Cuban existence. This fear must be conquered if any national project of transition is to stand a chance of success.

The Cuban penal code that is used to suppress dissent defines disobedience, disrespect, illicit association, possession of enemy propaganda and socially dangerous, and more as “crimes against socialist morality.” In Cuba, the crime of “social dangerousness” permits the government to imprison people for activities they may commit in the future. Until this totalitarian document is reformed or wiped away, expect little to change.

Yet, some Cuba observers characterize Raúl Castro as a more pragmatic leader than his older brother. And though this mightbe the case in some aspects of governance, it is not a pragmatism that will lead him to embrace policy changes that may jeopardize his hold on power. More likely, this pragmatism that will induce him to formulate policies designed to perpetuate power. When Soviet l
eader Mikhail Gorbachev visited Cuba in 1989, Fidel Castro reportedly warned him “if you open a window [to democracy] you will lose all power.” Even after his brother’s passing, Raúl is unlikely to open the window.

There is another model that Cuban leaders ought to know well: Spain’s rapid transformation in the 1970s from a dictatorship led by another aging tyrant, Francisco Franco, to a vibrant democracy that has posted some of the most impressive growth numbers of the last few decades. The ideal Cuban transition would look at lot like Spain’s, though Cuba most likely doesn’t have a strong enough civil society to pull it off.

Another, less hopeful parallel is that Cuba goes the way of the Soviet gerontocracy epitomized by Leonid Brezhnev, who was barely functional before his death in 1982. His successor Yuri Andropov, who was 68 years old, died two years later. He was, in turn, succeeded by the also elderly Konstantin Chernenko, who died a year after and was succeeded by Gorbachev. Compare this progression to Cuba: Fidel Castro is 84 years old and in poor health, Raúl is 79, and his supposed successor, José Ramón Machado Ventura, will turn 80 this month.

A new generation of Cuban leaders will eventually assume power. To be sure, they will likely favor continuity over radical change, but unlike the Castros, they might be receptive to democratic reform. These (likely military) officials will inherit not only a bankrupt economy, but also paralyzed, dysfunctional institutions, a discredited ideology, a disenchanted society, myriad social problems, and more. Cuba will be close to meeting the technical definition of a failed state, one that can no longer reproduce the conditions necessary for its own existence.

The Castros’ successors will become heirs to a dangerous, unstable situation. With questionable legitimacy and a repressive apparatus in disarray, they will have to confront significant internal and external opposition. Their options will be very limited.

They can stay the totalitarian course and face the potential unfolding of uncontrollable events, culminating in a Ceausescu-like bloodbath, as happened in Romania. Or they can choose to become leaders of a democratic political opening and confront more manageable political loses. It may take the death of both Castros for this to pass, but theywill likely conclude that, for them, the safer and more prosperous life is the latter.

For now, the firings only highlight the dismal state of the Cuban economic model, perhaps best depicted by the old Soviet joke: “We pretend to work and they pretend to pay us.” The regime in Havana is peddling a similar story today: They will pretend to reform, expecting the world will pretend to believe it. Let us hope nobody in Washington is buying.