The legendary central banker speaks with FP about family values, what went wrong with big finance, and why baseball is to blame. 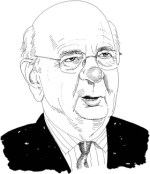 My father was in public service most of his life. And he was vocal about responsibility; he had very strong opinions about what was right and what was wrong. If he found an employee or a policeman who was not living up to his position — taking a bribe or taking tips — out they went!

Our economy spent more than 10 years overconsuming, underinvesting, too heavily engaged in borrowing from abroad — and it all contributed to the massive financial crisis we have today. This is not an ordinary recession where you may have a sharp decline, then when money eases, it snaps back. A massive amount of debt has us by the throat, so to speak. We’re in for a long slog.

I think the financial markets became an enabler. There was a feeling that somehow we reached a kind of nirvana where well-developed financial markets were self-equilibrating and spreading debt around in a way that reduced or spread risks to the economy as a whole and to financial institutions. That all turned out to be an illusion.

People were making huge amounts of money in this financial transformation, but there’s a real question about how beneficial it was for the economy generally. A lot of this is not how much money you got, but do you got more than the next guy. When I was at Chase Manhattan Bank, it was anathema to bank management to pay people bonuses, and the feeling was that this would corrupt their unbiased judgment and their fiduciary responsibilities.

I certainly would like to think ethics have a place in finance. That’s something we may have forgotten. In a reasonably operating financial system, the lack of recognition of fiduciary responsibilities will bring your own destruction sooner or later.

It’s all baseball’s fault. It’s when they began paying baseball players so much. I was a Brooklyn Dodgers fan, and my introduction to evil was when Walter O’Malley took the Dodgers out of Brooklyn. And just after they won the World Series! It’s the Yankees’ fault: perpetual victory, paying all that money. I don’t blame O’Malley, but it was symptomatic of the erosion of values [laughter]. That was my epiphany — that there was evil in the world. The Dodgers have fled.