Unemployment: Just How Bad Is It?

For American job seekers, it's the autumn of their discontent. Unfortunately, they have some worldwide company. Here's FP's guided tour of the grim numbers. 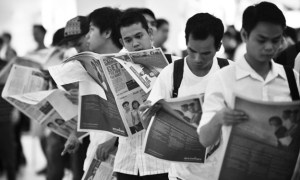 If there has been one defining feature of the Great Recession, it’s jobs — the persistent lack of them, that is. The world has had economic downturns as steep and long as this one before, but never in modern times has employment taken so long to recover. And there’s no sign that we’re through the thick of it yet; most economists project that U.S. jobs won’t come back fully until 2017 or even later. How bad is it? Worldwide, tens of millions of people can’t find work. But the United States has taken a particularly bad hit. Depending on how you count, anywhere from 9.6 percent to 17.1 percent of the U.S. workforce was unemployed in September. That’s far above most of Europe, where struggles with unemployment have been limited by a strong social safety net. The Netherlands, for example, has managed to get through the downturn with an unemployment rate less than half the U.S. rate, and other countries are holding steady or making small gains. Other big losers include young people and men; both groups are suffering more than they have in previous downturns. This is the worst year on record to be under age 24 and looking for a job.

Perhaps the most alarming aspect of the crisis is that no one seems to know how to fix it. Insurance can serve as a stopgap; employers can be encouraged not to lay people off. Industries can be propped up, and public-works posts can be created. But all that takes money, something there’s little of these days. And as for homegrown jobs, well, they just aren’t coming back like they used to.

A WORLD WITHOUT JOBS

Unemployment may be the best barometer a country has about the state of its economy. During the financial crisis, the news has been bad — but not uniformly so. Wealthy countries have been the worst hit by the jobs crisis, while developing countries such as Brazil and Indonesia have fared better, thanks to their relative independence from Western markets as well as strong demand for agricultural products and natural resources. 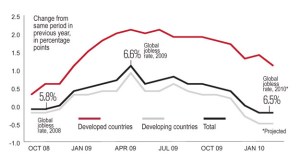 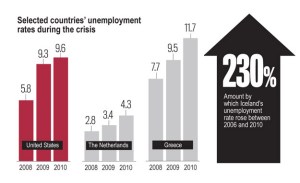 It’s true: The recession hit men the hardest. In the United States, for example, male employment fell 6.7 percentage points between January 2007 and July 2010, while female employment fell only 3 percentage points. Why? Two industries dominated by men, manufacturing and construction, were in free-fall. Similar trends can be seen worldwide. The exception is among young women, who have a higher unemployment rate than young men.

THE YOUNG AND THE JOBLESS

It has been a terrible year to be young and looking for a job: About 81 million people worldwide between the ages of 15 and 24 are currently without work. In the United States, the youth unemployment rate stands at 19.1 percent, the highest since tracking began in 1948. Young workers are three times more likely to be unemployed than adults, as they tend to be the last hired and the first fired. Nor do these new workers have the skills and experience that would make them indispensable in the workplace. At the moment, the global job market is expecting a large influx of young workers, meaning that some 470 million new positions are needed over the next 10 years just to maintain current unemployment rates. 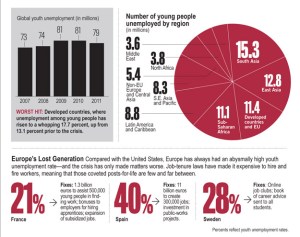 Germany
Germany was rocked by the recession, its GDP dropping 5 percent in 2009. Today, however, its unemployment rate is even lower than before the downturn, due to a program called work-sharing. While the United States pays unemployment benefits, in effect paying people to be unemployed, Germany provides tax credits to companies that reduce workers’ hours by 20 percent, essentially paying people to keep their jobs — but work fewer hours, taking home 4 percent less pay.

Argentina
Despite Argentina’s infamous financial troubles over the last decade, it has done remarkably well during the global recession. The country’s economy is projected to grow 3.5 percent in 2010, buoyed by useful trade partnerships. Argentina has hitched its wagon to the growing economies of China and Brazil, its two largest export recipients — and in return has managed to keep its unemployment rate relatively low. 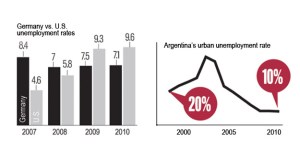