The Horror, The Horror… and the Pity

How the international media is covering the Tea Party.

Thanks to outsized personalities like Sarah Palin and Christine O’Donnell — as well as recent controversies over immigration and Islam — this year’s midterm elections have attracted more international attention than usual. But as this survey of the foreign press shows, each country seems to have its own unique take on America’s anti-incumbent movement. 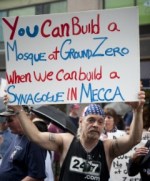 Narrative: The Tea Party is an Islam-bashing political front

Coverage: While the Tea Party may have begun primarily as an economic movement opposed to the expanded role of the federal government in the U.S. economy, in the Pakistani media it is often described a synonymous with the anti-Islam backlash surrounding the “Ground Zero mosque” and proposed Quran-burning in Florida.

Pakistan’s Dawn newspaper has described American Muslims as “living on the edge” ever since the Tea Party and other “right wing zealots” ganged up on the proposed Cordoba Center in lower Manhattan, releasing “venomous discourse” into the national conversation. The rhetoric targeted at American Muslims has been called a “reminder of the treatment meted out to other scapegoats in American history.”

In Dawn‘s telling, the Tea Party has risen in tandem with the “Ground-Zero-inspired Muslim baiting frenzy” and is driven largely by the “bigoted rabble-rouser” Glenn Beck who attacks President Barack Obama as a “closet Muslim.” According to Dawn, the same “predatory instinct” that led Americans to enslave Africans and wipe out Native Americans is “gathering mass, once again,” this time with Muslims as the primary target.

Narrative: The Tea Party is about fear of American decline

Coverage: In a broad survey article on the history and national reach of the Tea Party movement, Der Spiegel‘s Marc Hujer and Thomas Schulz argue that, “For the first time since the global economic crisis more than 80 years ago, questions are being raised about America’s success model, the principle that this country without a welfare state has always been more successful than Europe.”

They take particular note of Beck’s warnings against European-style socialism and allusions to Hitler and Stalin, making the case that the Tea Party is a movement of “blue-collar workers with posters of pin-up girls in their lockers.” They are reacting, the article argues, against what they perceive to be a shift toward a European social model in which they would lose their privileged position.

According to the authors, “Beck gives a voice to… a rage directed against the architects of the new America.”

Writing shortly after the passage of healthcare reform, arguably Obama’s most impressive domestic acievement, Hujer and Schulz observe that “the more assured of success Obama becomes, the angrier are the protests.”

Narrative: The Tea Party will lead to U.S.-China conflict

Coverage: The government controlled China Daily describes the Tea Party as a “polarizing groundswell … based largely on suspicion of Obama’s background, policies and motives.” The movement is blamed for the high level of vitriol directed at incumbents in this election cycle.

But beyond the anti-Obama backlash, the newspaper sees the movement as a sign of the “US’ inability to find political solutions” to economic problems. China’s role as “the major engine of global economic recovery,” according to this view, “embarrasses and threatens the US.” In response, movements like the Tea Party promote a zero-sum view of the international economy in which only one country can be prosperous. If this worldview is followed to its logical conclusion, war between the two powers over influence or resources may be inevitable.

According to China Daily, “China’s greatest danger is that US policymakers face economic and national security crises they cannot solve.”

Narrative: The Tea Party is a movement of conspiracy theorists, reactionaries, and anti-elitists

Coverage: In the French media, the Tea Party has become the pinnacle of American stereotypes — a movement of libertarian, Anglo-Saxon, conspiracy-theory-driven voters who are, more than anything else, angry that the United States is losing its place in the world. “The Tea Party is the party of no,” Le Monde wrote in an editorial on Oct. 20. “The Tea Party is also … a libertarian movement. … In the Tea Party, they wish to be left alone, to live as before when everything was going well, when America embodied the Anglo-Saxon status quo, when the Taliban were on the CIA payroll, and when neither the Chinese nor al Qaeda opposed the hegemony of Uncle Sam. Those in the Tea Party are typically white, and ‘ok’ financially and hence in something of a panic ever since the world began to change as the times changed. They don’t worry about climate change, because they cannot imagine how mankind could have in its power to mess up what God created.” An earlier blog post from Le Monde placed the summer’s conservative rallies, including Glenn Beck’s Restore Honor gathering in Washington, as “a chance to feed the rumors and conspiracy theories that have shaken the White House through the summer” — for example, Obama’s secret Muslim faith or his supposed lack of U.S. birth certificate.

Where does this movement arise from? The French narrative places the Tea Party firmly in the American tradition of anti-European, anti-welfare rebellion. That long-underlying current has exploded amid a perfect political storm — the need to bail out banks, reform healthcare, and tackle climate change. “The tradition of anti-elitism is not new in American history,” Le Monde writes. But now, “the president himself is seen as elitist in chief.”

Narrative: An ultra-radical right-wing movement in the mold of authoritarians of another era

The Spanish are less mystified and more alarmed. “We don’t know if we feel more profound horror or more profound pity,” El Pais wrote. The author refers to the Tea Party as an extremist movement and notes that O’Donnell (for example) is “proudly extremist.” From there, the newspaper warns that “sometimes totalitarianism results from the best intentions and fanaticism grows in the most benign and public settings. The United States is living in one of these moments … in which its values are in conflict with one another.”