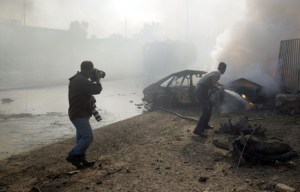 The land mine that took Joao Silva’s feet worked perfectly.

Silva, a brilliant and courageous photojournalist on contract to the New York Times — and, in the eyes of many colleagues, one of the finest combat photographers of his generation — suffered grievous injuries Saturday after stepping on a mine while embedded with U.S. troops in southern Afghanistan. Three nearby American soldiers suffered concussions from the blast. This suggests that the device was a miniature antipersonnel mine — the difficult-to-detect plastic type that are usually no larger than a cosmetics jar, or a can of tuna. Silva didn’t die because he wasn’t supposed to. The weapon’s maker — given its location, probably an old Soviet arms manufacturer — had calculated the exact formula of explosives and shrapnel required to maim, shredding tissue and smashing bones, but not to kill. Thus, its agonized victim must be carried off the battlefield by comrades, tying down even more manpower. Force multiplication, the military calls it.

Silva knows the risks of mines better than most journalists. He has covered virtually every war, natural disaster, and social upheaval worthy of a headline over the past 15 years. He got his start in his native South Africa as one of a quartet of fearless young photographers dubbed the “Bang Bang Club” who documented the internecine violence in black townships as apartheid crumbled. Membership in that small band of brothers has exacted high costs. Ken Oosterbroek was shot dead in a township firefight in 1994, and Kevin Carter committed suicide — after earning a Pulitzer for work in famine-struck Sudan — that same year. Another of the group’s Pulitzer winners, Greg Marinovich, saw the light years ago, and foreswore war zones after being wounded so often that other conflict journalists only half-jokingly branded him a “bullet magnet” and began avoiding him on assignment.

Silva was the only unscathed survivor until Sunday, when both of his legs were amputated below the knee at a U.S. military hospital in Germany. He is known among the international press corps as a careful, modest, and exceedingly generous man — a married father of two who has managed to keep his humanity intact doing a dangerous and sometimes emotionally atrophying job.

“Those of you who know Joao will not be surprised to learn that throughout this ordeal he continued to shoot pictures,” Bill Keller, the executive editor of the Times, reassured the paper’s staff in a memo. Indeed, Silva had photographed his friend Oosterbroek’s death and at least two of Marinovich’s near-fatal shootings. His unblinking devotion to exposing human cruelty on film invites comparisons to the most fabled war photographer of the last century, Robert Capa, who died after stepping on a land mine in a place that would come to be known as Vietnam. And Silva’s grave injuries focus attention, in the selfish way that harm to one’s own tribe always does, on the enduring horrors of — and largely forgotten crusade against — land mines.

It seems such a 1990s issue: Princess Di in an African hospital, comforting a child with bandaged stumps. Today, the notoriety of land mines has been at least partly eclipsed by the bane of more modern, equally sinister weapons, such as cluster bombs and remotely triggered improvised explosive devices, or IEDs. But according to the International Campaign to Ban Landmines, the coalition of NGOs that pulled off a diplomatic coup by shaming more than 150 nations into signing a Mine Ban Treaty that took effect in 1999, thousands of people continue to be killed or horribly wounded by mines every year in active and former war zones across the planet. This toll is a fraction of what it used to be, thanks to the activists’ efforts. But the ICBL tally of mine victims over the past decade still exceeds 73,500 worldwide — a bleak figure that’s made worse by the fact that most of the dead and mutilated didn’t wear uniforms. Estimates of the civilian proportion of land mine casualties range from 60 to 85 percent. This represents a mountain of severed feet, legs, toes, fingers, and arms, most of them blown from the bodies of farmers plowing their fields in Cambodia, women drawing water from wells in Iraqi Kurdistan, and children playing soccer in Bosnia. Some of the most recent human shards to join that grisly pile happen to belong to hundreds of U.S. troops who have served in Iraq and Afghanistan — and, a few days ago, to a war journalist.

The United States is among the remaining 20 percent of the world’s countries who refuse to sign the land mine ban. Washington keeps company in this altogether more unsavory version of the Bang Bang Club with authoritarian states such as Iran, Russia, Burma, and China. The excuse is mostly tactical: The Pentagon says it can’t dispense with the gargantuan mine fields required to defend South Korea from an invasion by Pyongyang. Anti-mine campaigners grant that the United States is in de facto compliance with the treaty. It stopped producing the weapons in 1997, has upgraded designs to render its mines inert after a period of time, and has donated millions to international de-mining efforts. But some 10 million American antipersonnel devices — and more than 7 million antivehicular mines — remain stockpiled, like malevolent eggs, for future use if needed. First Bill Clinton, then George Bush, and now, to the disgust of human rights groups, Barack Obama have all repudiated the treaty. Last November the administration threw a sop to its humanitarian critics by promising that a policy review was continuing.

Weighing one war crime against another is a bit like counting the demons that dance on the head of a pin. What, exactly, makes chemical or biological weapons more monstrous than millions of low-tech explosives that cost as little as $3 apiece, are activated by 20 pounds of pressure on a crude firing pin, and which linger in the soil like some invisible toxin, ruining lives for generations? How is targeting specific innocent populations for elimination — genocide — immeasurably more heinous than eliminating innocent populations piecemeal, essentially at random? And isn’t the latter a classic definition of terrorism?

Twice in my travels I have witnessed land mines doing what they are meant to do. Not incidentally both cases were in Afghanistan, the world’s land mine poster child, where an estimated 10 million explosives lie blurred in the ground, many dating from the 1979 Soviet invasion: roughly one calamitous device for every three Afghan citizens. The first incident was a statistical rarity, involving as it did a bona fide combatant. He was a young, eagle-faced soldier with the Northern Alliance whose feet were scythed off by the loud, brown pop of an antipersonnel mine planted by the Taliban on the approaches to Kabul. (Again, that effective engineering.) Three grim-faced colleagues hauled him unconscious to my car, obliging my horrified driver, at gunpoint, to speed him to a hospital. I got ditched on the battlefield. When the driver finally returned, he waved his hands in choked sadness over the steering wheel and the car’s floorboards sloshed with blood. I have no idea if the soldier survived.

The second casualty, by contrast, was more typical. He was a trucker on the road to Bamian, the famed valley of the Buddha monoliths. He had been driving point in a column of civilian vehicles, the first to penetrate territory recently ceded by the Taliban, when a mine blew off his right front tire. I watched him climb unsteadily from the truck’s smoking cab and stagger back through the terrified caravan, past my open car window, with a look of blank shock on his face. He was an old man, bleeding from his ears, and where he was proposing to walk was anyone’s guess. Maybe clear out of Afghanistan. Two children ran laughing after the shattered tire, which had bounced down a hill, probably into another mine field. These anecdotes point up a problem with the global landmine ban: Guerrillas and insurgents generally don’t sign international conventions. (Though some irregular forces have agreed, in fact, to hew to the ban’s prohibitions.)

What one usually sees in troubled parts of the world, of course, aren’t mine explosions but the even uglier human aftermath of encounters with land mines. In Ethiopia, legless veterans of the war with Eritrea paddle about destitute towns on homemade skateboards. Many are social outcasts. In Angola, another land mine hell, women and children bang their stumps on car windows in the capital Luanda, begging for alms they sometimes can’t even carry away for want of hands. These unsightly “mutilados” have been repeatedly swept out of the downtown since the advent of the peacetime oil boom. Land mines continue destroying lives like this for a long time — decades — after ceasefires. Locating and deactivating a single device can cost hundreds of dollars. Their effects on entire societies are by now depressingly well known: Shattered children drop out of school, cementing their families into poverty, and fearful adults avoid once productive land, stunting national economies.

Joao Silva, who is 44 and nothing if not a survivor, will doubtless overcome his injuries. News articles report that he awoke from sedation Monday. And the Times expects him to eventually return to duty. His colleague Michael Kamber interviewed him last December in Baghdad for a book on war photography. “You might not necessarily change the world with your images — in fact, I don’t think I’ve seen one image that’s changed the world,” Silva said of his witness to the rituals of killing, “but if you’ve changed one single person’s mind, I think you’ve accomplished something.” He later added, “When my daughter was born, I made a promise to myself that if it didn’t feel good, if it didn’t feel right, I would walk away from it.” He can still do that, of course, with the aid of prosthetics.

Silva’s home, South Africa, ceased land mine production in the late 1990s, and it is a signatory to the global ban. The country’s literature, haunted by the long nightmare of apartheid, often grapples with the moral scars of expedient mass violence — not unlike the sort that shears off thousands of people’s limbs indiscriminately. In a novel titled Waiting for the Barbarians by the Nobel laureate J.M. Coetzee, the broken narrator questions his torturer, with genuine wonder, about his ability to rejoin society after doing unspeakable things to other human beings:

Do you find it easy to take food afterwards? I have imagined that one would want to wash one’s hands. But no ordinary washing would be enough, one would require priestly intervention, a ceremonial of cleansing, don’t you think? Some kind of purging of one’s soul too — that is how I have imagined it. Otherwise how would it be possible to return to everyday life — to sit down at table, for instance, and break bread with one’s family or one’s comrades.

It is tempting to ask these same questions of the men, of whatever army or guerrilla faction, who still find it admissible to sow land mines along village footpaths. It could be asked of the dwindling number of governments that continue to hoard the weapons in their bunkers. And it should be asked, too, of the ordinary souls who assemble the things, for a living wage, in some well-lit and suitably bland manufacturing plant.