Just how wrong can NYT’s Friedman be? Let’s review his take on Ireland

Tom R.: This is a bit far afield from our usual “Best Defense” fare, but Thomas Friedman is so well-known in the field of national security that I thought it might interest you all. By Sean Kay Best Defense lamed leprechauns correspondent Perusing the ForeignPolicy.com list of 100 most influential global thinkers, I paused over ... 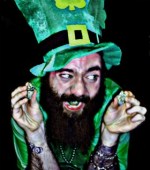 Tom R.: This is a bit far afield from our usual “Best Defense” fare, but Thomas Friedman is so well-known in the field of national security that I thought it might interest you all.

Perusing the ForeignPolicy.com list of 100 most influential global thinkers, I paused over the inclusion of Thomas Friedman, a columnist for the New York Times. Certainly, he is influential, and he raises vital national issues with his focus on energy and education. However, it is worth noting that on some of the most significant issues of the day, no. 33 has been persistently wrong, from cheerleading for the invasion of Iraq to his jolly theory that countries that have McDonald’s outlets do not fight each other (see U.S. vs. Yugoslavia, 1999, and Russia vs. Georgia, 2008.)

And now there is the case of Ireland. Mr. Friedman wrote in The World Is Flat (2005) that, “I do get a little lump in my throat when I see countries like China, India, or Ireland adopting a basically pro-globalization strategy, adopting it to their own political, social, and economic conditions, and reaping the benefits,” he wrote. He understandably celebrated that globalization helped many societies, including Ireland, move out of economic stagnation. “When done right and in a sustained manner, globalization has a huge potential to lift large numbers of people out of poverty. And, when I see large numbers of people escaping poverty in places like India, China, or Ireland, well, yes, I get a little emotional. No apologies.”

But did Ireland do globalization right? Well, it did exactly as Friedman suggested a country should do. Ireland, he wrote, was, “One of the best examples of a country that has made a huge leap forward by choosing development and reform retail of its governance, infrastructure, and education.” (This was, by the way, in 2005, when economists there knew that it was already headed on a path to economic ruin.)

Central to his case for Ireland was his discussion with Michael Dell, done through an e-mail exchange. Michael Dell, the founder of Dell Computer, had set up shop in Limerick and said in his note to Tom Friedman: “What attracted us? A well-educated workforce — and good universities close by. Also, Ireland has an industrial and tax policy which is consistently very supportive of business, independent of which political party is in power.” Friedman reported that Dell said, “The talent in Ireland has proven to be a wonderful resource for us.”

Yet two years later, Dell began the process of closing up shop in Limerick and moving major operations to Poland. In January 2009, Dell announced it would lay off nearly 2,000 of its 3,000 employees doing manufacturing work at Limerick, citing high labor costs. Actually, Dell’s location in Limerick had already belied much of Mr. Friedman’s central thesis about Ireland. Had he gone there and spent some time actually researching it, instead of just emailing a CEO, he might have known this. At the height of the leap of the Celtic Tiger, Limerick still suffered unemployment rates five times the national average, educational underdevelopment, and multiple pockets of serious deprivation and violent crime.

Writing in the New York Times on 1 July 2005, Tom Friedman argued that the rest of the world should “Follow the Leapin’ Leprechaun.” He argued one of the best things Ireland had done was to “make it easier to fire people, without having to pay years of severance. Sounds brutal, I know. But the easier it is to fire people, the more willing companies are to hire people.” In a wildly inaccurate statement, he wrote that: “And by the way, because of all the tax revenue and employment the global companies are generating in Ireland, Dublin has been able to increase spending on health care, schools and infrastructure.” In reality, the government at the time was not only not generating revenue, its investment in education was declining and it was beginning to accumulate massive debt. Today, Ireland’s deficit is at 32% of GDP — the highest in the Eurozone.

Of course, Ireland has not only a deficit crisis, but now a massive banking crisis which was the result of a skewing of the Irish economy in 2001 towards construction and mortgage lending facilitated by large international banking exposure, well underway when Friedman made his assessment. In 2005, Friedman argued that the Irish path was far superior to that of Germany, which was holding onto jobs and major industrial production. Meanwhile, a central assertion of Friedman was that Ireland had gotten its governance right. The then prime minister, Bertie Ahern boasted to Friedman in 2005 of having “met the premier of China five times in the last two years.” Jump forward five years, and Bertie Ahern was run out of government in disgrace and the new party that led the polls heading towards a new election for 2011 was, for the first time in history, Labour. In March 2010, Eamon Gilmore, the head of Labour, called out the new leader of the government, Brian Cowen, for having committed “economic treason.”

Now, Irish banks are to be bailed out by the EU and the IMF to the tune of 85 billion euro at a 5.83 percent interest rate that the country simply cannot afford to pay back. The government will reap enormous pain on its own population in deep budget cuts that are likely to hinder economic growth for years to come. Ireland is a nation lying in economic catastrophe and about to get much worse.

The legacy of Friedman’s failed analysis is regrettably, important still today. Ireland, under strong pressure from the American Chamber of Commerce, is holding onto its low corporate tax rate of 12.5 percent hoping to keep the international businesses there. While Ireland gains from this, the impact of foreign companies is not going to solve the country’s problems. In fact, Ireland could raise its corporate rate substantially and still be among the lowest in the European Union. The political calculation is, in effect, should Ireland tax international businesses? Or should it cut health benefits for seniors, punish the poor, and stand by while a new generation of talent emigrates?

Now let’s talk about Friedman’s debt. He owes it to both the people of Ireland and his readers to correct the record. His conclusions about Ireland were deeply flawed and yet they were embraced and celebrated by an Irish government that was reveling in excess and deeply entangled with corrupt bankers. The real Irish model that he did not see was deregulation, corrupt crony capitalism, and low corporate tax rates.

Being wrong as an analyst of globalization is fine — that is part of the learning process. But Tom Friedman promulgated a theory of globalization that reinforced a doubling down on damaging economic and political actions in a small and vulnerable country that is now suffering deep pain. As Ireland is now threatening to unravel the entire Eurozone, which would do deep damage to the American economy, Mr. Friedman might at least rethink his “no apologies.”

Sean Kay is a professor of politics and government at Ohio Wesleyan University, where he chairs the International Studies Program. He is also an associate at the Mershon Center for International Security Studies at the Ohio State University. He is the author of several books, including Celtic Revival: The Rise, Fall, and Renewal of Global Ireland (forthcoming, Rowman & Littlefield, 2011).

Thomas E. Ricks covered the U.S. military from 1991 to 2008 for the Wall Street Journal and then the Washington Post. He can be reached at ricksblogcomment@gmail.com. Twitter: @tomricks1
Tag: Ireland