What is the state of global terrorism today, nearly a decade after the Sept. 11 attacks? Foreign Policy asked the top terrorism experts in the field. Here's what they told us: 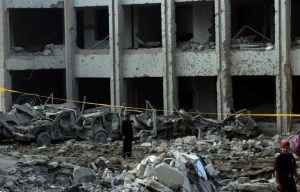 As we approach the 10th anniversary of the Sept. 11 attacks, FP asked top terrorism experts to take stock of the threat posed by al Qaeda and its allies. And while the majority of respondents believe that al Qaeda is no stronger today than it was a decade ago, they also worry that we are only slightly safer from terrorist attack than we were the day the Twin Towers fell.

The headline finding is surprising: Experts credit nine years of the war on terror with making U.S. soil only marginally more secure — despite the fact that only 14 Americans have died in jihadist terrorist attacks in the United States since Sept 11. Why the disconnect? Respondents were likely quite cognizant of the numerous serious “near-miss” terrorist operations targeting the homeland, from the Christmas Day 2009 plot to bring down a passenger jet over Detroit to the botched Times Square car bomb attack in May 2010. These plans were devised by al Qaeda in the Arabian Peninsula and the Pakistani Taliban, respectively, and were a powerful reminder that the threat from terrorism is still real.

Read this Slide Show for the full survey results.

A strong majority also predicted that there will be another terror attack in the United States or Europe in the next year. Given that a botched terrorist attack took place in Stockholm, a plot was averted to mount a “Mumbai-style” attack in Copenhagen, and a dozen suspected terrorists were arrested in the United Kingdom — all since the survey was completed — the experts were, unfortunately, probably right about this. Still, 78 percent of respondents disagreed with the idea that al Qaeda is stronger today than it was on 9/11.

There is a great deal of bad news for Pakistan in the survey. Overwhelmingly, the experts selected Pakistan as the country that posed the greatest threat to the West today, and a majority also picked it as the country most likely to have its nukes end up in the hands of terrorists. Interestingly, only two experts named Iran as the West’s greatest threat or as a nuke proliferator to terror groups. Does this signify the end of the neoconservative notion that state sponsors of terrorism like Iran are more dangerous than groups without state sponsorship such as al Qaeda?

There was widespread agreement that “enhanced interrogation techniques” such as waterboarding are not effective, although there was something of an even split on whether closing the detention center at Guantanamo Bay would improve U.S. security.

Some of the most interesting insights came in the experts’ on-the-record responses. Roger Cressey, a National Security Council official under Presidents George W. Bush and Bill Clinton, characterized the CIA’s drone program in Pakistan as “the most successful counterterrorism program since 9/11,” while retired French counterterrorism prosecutor Jean Louis Brugière elegantly termed the drone strikes “efficient, but not sufficient.”

Asked to name the world’s most dangerous terrorist, counterinsurgency expert Andrew Exum wisely named not one of the obvious suspects like Osama bin Laden but “the terrorist whose actions precipitate a war between India and Pakistan.” Indeed, a “Mumbai II” is one of the most predictable challenges that Obama can reasonably expect to confront in the next two years. And just this past week, Mumbai went on high alert for a possible terrorist attack. Bizarrely, former CIA director James Woolsey named Iranian leader Mahmoud Ahmadinejad as the globe’s most dangerous terrorist, a confirmation that, at least in some quarters, neoconservatism is not entirely dead.

Finally, a number of experts had similar views about the biggest mistake by the U.S. government since 9/11: Several cited invading Iraq — and the resulting failure to get the job done in Afghanistan. Variations of this view were expressed by Cressey, Brugière, diplomatic heavyweight Thomas Pickering, and CIA veteran Bruce Riedel. If this is the first draft of a historical verdict on the war in Iraq, perhaps neoconservativism is, in fact, entering its terminal stage. 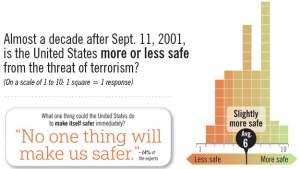 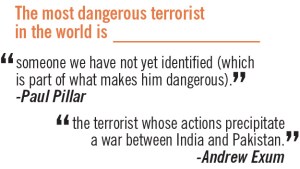 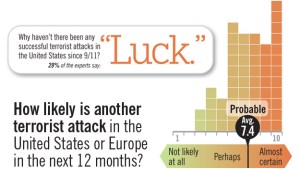 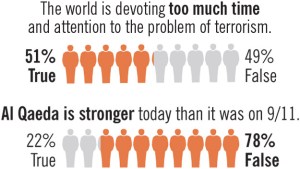 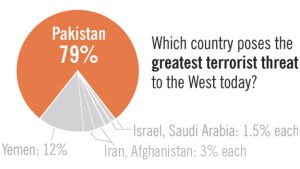 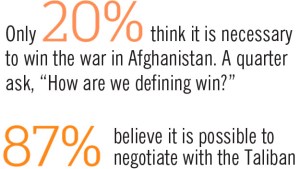 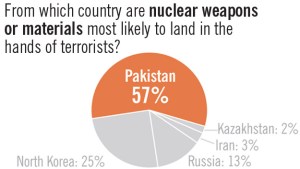 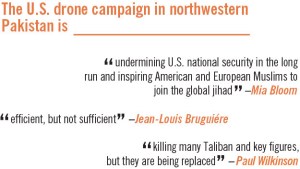 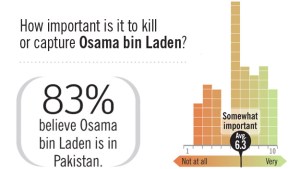 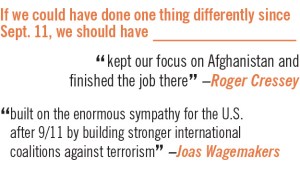