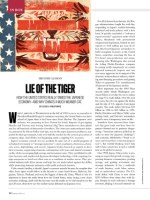 Clyde V. Prestowitz makes so many misleading statements that it is difficult to know where to begin (“Lie of the Tiger,” November 2010). For one, Japan’s economic miracle was not the result of “subsidized investment in ‘strategic industries.'” While various Japanese bureaucracies did indeed want to pursue such policies, the final policies were ultimately the product of a political process: Industrial subsidies throughout the period were primarily focused on the slowest-growing industries, namely processed food, mining, and textiles. Electrical machinery and automobiles received the least support. The closest parallel in the United States was the recent bailout of domestic auto companies — subsidies went to dying industries, not thriving ones.

Furthermore, the Japanese economy’s collapse over the past 20 years has little to do with tough U.S. trade policies. Rather, the extended crisis was the cumulative result of macroeconomic policies pushed by Washington and voluntarily implemented in Tokyo. During President Bill Clinton’s administration, Larry Summers, Timothy Geithner, and Laura Tyson — familiar faces in the current recession — argued that Japan needed massive fiscal stimulus. Unfortunately, that allowed Japanese banks and companies to avoid necessary restructuring. Later efforts proved too little too late, as Japanese taxpayers still find themselves footing the bills for corporate bailouts.

There is a valuable lesson in that for Washington. But maybe Prestowitz really believes it’s possible for government policy to somehow outsmart the market.

Prestowitz knows the “real” story of the American industrial response to Japanese competition in the 1980s, having been part of that successful reaction while in the U.S. government and afterward. I heard him describe the challenge, and the most promising American response, 25 years ago when I was living in Tokyo and he was working on this strategy. What he says now is entirely consistent with what he was describing then. And the question is why what “everyone knows” about those years is so different from what really occurred.

A political version of “magical realism” — a preference for mythical or invented versions of history, rather than the plain facts of what actually occurred — plagues many parts of American public life. Among its most damaging manifestations is the political-media myth that America’s industrial successes have been free of any taint of government encouragement, support, or coordination. That is not true of today’s triad of great high-tech wealth generators: information technology and the Internet (fostered by the Defense Advanced Research Projects Agency), genomics and biotechnology (fostered by the National Institutes of Health), and geospatial and GPS applications (fostered by the military). Nor is it true of America’s engagement with Japan and future interactions with China (or Europe). Congratulations to Prestowitz for attempting to dispel magical thinking with reality.

Dick Beason is correct to say that some slow-growing Japanese industries received subsidies. But he is wrong in saying that “strategic industries” were not subsidized. It’s an error that reflects his misunderstanding of Japan’s bureaucratic modus operandi.

In the “miracle” years, the Japanese bureaucracy made sure to maintain a stranglehold on the financial system. As in China today, Japan’s savers had virtually no alternatives to putting their savings in the banks at low interest rates. These savings were then channeled by the government into loans made on a preferential basis to selected strategic industries. The export-oriented auto companies got these loans while the domestically oriented pharmaceutical industry did not. There were other interventions by the Japanese government: The yen was manipulated to be undervalued, and exporters were allowed to deduct the entire amount of their foreign exchange exposure — calculated as equivalent to the amount of their export sales — from their taxes. Because these measures worked so well and required no budget appropriations, the Japanese bureaucracy actually never wanted to provide heavy direct subsidies. It is not clear why Beason thinks otherwise.

As for the United States’ pushing Japan to do massive stimulus to encourage buying of U.S. exports, I’m not sure where Beason gets his facts. I was a very active player in U.S.-Japan affairs in those days, and I clearly remember the Japanese vice minister of finance explaining to me that Japan would spend as much and for as long as was needed to counteract the impact of the collapse of the Japanese bubble in 1992. That stance did not require any cajoling on the United States’ part.