A world of corruption revealed by WikiLeaks.

It's a dirty world. From the diamond mines of Zimbabwe to the government coffers of Pakistan, U.S. diplomats run into corruption everywhere they go. We slogged through the muck and grime of the WikiLeaked cables to find the most egregious reports of official thievery: 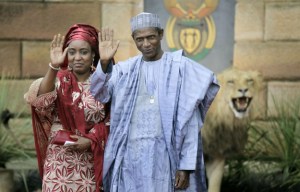 It’s a dirty world. From the diamond mines of Zimbabwe to the government coffers of Pakistan, U.S. diplomats run into corruption everywhere they go. We slogged through the muck and grime of the WikiLeaked cables to find the most egregious reports of official thievery:

The Deal: There is, no doubt, more than one way to smuggle contraband into Nigeria. But if you’re in the presidential palace, things get more complicated. That’s apparently one reason that former Nigerian President Umaru Yar’Adua stayed close to Dahiru Mangal, a businessman from his home state of Katsina. In a 2008 cable, a “longtime mission contact” tells the embassy that Mangal is “Yar’Adua’s ‘go-to man’ to accomplish ‘anything filthy that Yar’Adua needs done’ … and also the ‘go-to’ for any wealthy Nigerian, who wants to import ‘just about anything’ into Nigeria.” It worked this way:

Mangal owns a warehouse across the Niger border (likely close to the Katsina border with Jibiyya and Maradi) in which he stores hundreds of 40-foot shipping containers. XXXXXXXXXXXX claimed Mangal is able to import goods from around the world, including China. In return, Mangal requests a flat fee of 2 million naira (USD 17,000), excluding the cost of goods. Approximately 100 containers per month are brought into Kano, and goods are then delivered to clients or sold in Kano’s Kurmi market.

The Dirt: Yar’Adua kept up a front of enforcing the rule of law while in office (he reportedly asked Mangal to sever his illicit ties when Mangal became an official presidential advisor, according to the cable). His wife, Turai, however, is rumored in Nigeria to be pulling no such punches. One embassy source noted the following incident:

This anecdote merely touches on the massive scale of corruption in Nigeria, which has been well-documented elsewhere. Suffice to say that after the ex-president declared his assets at the beginning of his term, many wondered in what other country a chemistry professor turned rural outpost governor could earn $7 million. (Plus, the cable actually suggests that he underestimated his wealth, excluding “an USD 10 million house in central London.”) Turai Yar’Adua has not responsed publicly to the allegations in the cable.

The Deal: According to a 2009 cable, the U.S. Provincial Reconstruction Team operating in Ghazni province discovered that Governor Usman Usmani and his cronies were aid thieves, eating up international money meant for their people. Usmani is alleged in the cable to have embezzled the salaries of newly formed local Afghan security forces, diverted food aid to be sold on the black market, trafficked in the mineral chromite, and been complicit in stealing land intended for refugee resettlement.

The Dirt: Ghazni lies between the Afghan capital of Kabul and Kandahar province, where the military is working hard to push back against the Taliban. That key location, plus the region’s incredible poverty, has won Ghazni international aid. But the cable offers a particularly chilling look at the challenges of putting any sort of assistance into a corrupt system: “the governor … and certain district governors are engaged in a scheme to divert [U.N. World Food Program] WFP wheat and other food items to the black market to be sold.” In one instance, a district government sold donated wheat for a profit, when it was meant to feed 1,788 families in need.

It’s not just helping the poor that’s messy; fighting the Taliban comes at a high price as well. In an attempt to build up local resistance against the insurgents, the Kabul government and NATO forces have paid “Arbakai” local forces, essentially local defense militias, to counterbalance the weight of the Taliban in their communities. In Ghazni, however, there had been problems with payment actually reaching those troops: In one particular case, according to sources quoted in the cable, Usmani kept $100,000 of the $160,000 payment and divided the rest amongst other district leaders.

The Deal: A Feb. 12 cable from Moscow described “direct links to criminality” with former Moscow Mayor Yury Luzhkov “at the top of the pyramid” of corruption. The cable alleges links between the mayor and his wife, a powerful construction magnate, and the powerful Solntsevskaya criminal syndicate and suggests that Luzhkov’s rise to power was funded by criminal money, that the mayor had enriched himself by skimming off lucrative construction contracts throughout the city, and that critics of the mayor had been killed by the criminal underworld.

The Dirt: The cable predicted, correctly, that Luzhkov would soon be more of a liability than a boon for the Kremlin. The longtime mayor was fired in September 2010. But allegations of Russian corruption don’t stop at Luzhkov. In another WikiLeaked cable, a Spanish prosecutor describes the country as a “virtual mafia state.” Another accuses Prime Minister Vladimir Putin himself of having enriched himself through lucrative oil contracts.The Kremlin has dismissed the allegations in the cables as “rubbish.”

The Deal: Earlier this year, the U.S. Embassy in Baku wrote a series of get-to-know-you cables titled “Who Owns What,” filled with biographical factoids on Azerbaijan’s most colorfully corrupt elite. Kamaladdin Heydarov is current head of the Ministry of Emergency Situations (MES), which, the cables note, “is viewed as a cash cow for Baku’s elite” and considers its jurisdiction “anything that is associated with temperature, pressure, or isotopes — categories broadly interpreted to include just about everything under the sun.”

The Dirt: Heydarov stands out — even in Azerbaijan’s monopolistic economy — as being “at the top of this mountain of non-competition,” the Embassy claims. His empire includes “companies in food canning, construction materials, concrete, asphalt, chemicals, bricks, textiles, CD and DVD production (since licensed CDs or DVDs are generally unavailable on the local market, these are certainly all pirated), milk processing, tourism, gypsum materials, leather, agriculture, pianos, alcohol and spirits, juices, banking, insurance, and construction.” It’s a monolith second only to one in all of Azerbaijan, the cable notes: “the Pashayev family (into which President [Ilham] Aliyev married.)”

What does that mean for the Americans? They found out the hard way:

The Heydarovs have largely cornered the fruit juice market in Azerbaijan, maintaining extremely high prices for locally produced juices and watered-down juice drinks, while making life difficult — with the help of State Customs — for cheaper competitors from Turkey, Ukraine and Russia. When USAID tried to support the production and distribution of pomegranate products in Azerbaijan, they quickly learned that no one sells pomegranate juice, concentrate, or derivatives from Azerbaijan without Heydarov’s permission.

Heydarov has yet to repond to the allegations through any English language sources.

The Deal: First Lady isn’t just a title for Leila Ben Ali, wife of the president of Tunisia. She and her family have become the economic brokers of the modern Tunisia, the leaked cables claim. In the summer of 2007, for example, the Tunisian government gave Ben Ali the land to build a new international school — and about $1.5 million to start it. Together with co-owner Suha Arafat, widow of former Palestinian leader Yasser Arafat, Ben Ali turned the Carthage International School into a hot spot for the children of the Tunis elite. (It helped when, not long after, the government shut down Carthage’s elite rival, the Bouebdelli School.) But just months after Ben Ali and Arafat began their apparently successful partnership, the two had a falling out over the school. The Tunisian government then revoked Arafat’s visa while she was away in Malta. Effectively exiled, Arafat called the U.S. Embassy in Tunis to complain, blaming the whole mess on Ben Ali. By mid-2008, Ben Ali had sold the school “for a huge, but undisclosed sum,” a cable claims. “[Source] noted any such sale would be pure profit since Ms. Ben Ali received land, infrastructure, and a hefty bonus at no cost.”

The Dirt: To do business in Tunisia, you have to be in with “the Family” — the First Family, that is, according to the Americans. “Whether it’s cash, services, land, property, or yes, even your yacht, President Ben Ali’s family is rumored to covet it and reportedly gets what it wants,” the same 2008 cable notes. But Tunisians don’t seem to blame Ben Ali himself for these misdealing; that honor goes to his wife’s “Trabelsi clan,” which includes the first lady and the families of her 10 siblings.

Whoever’s at fault, what’s clear is that corruption is getting worse in Tunisia on every level, the cables say. One source joked to the embassy that when inflation rose, even the price of bribes went up. Petty corruption muddies every transaction — from getting into schools to winning government jobs, the cable explains. And even foreign businesses are taking the hint:

The prime example remains McDonald’s failed entry into Tunisia. When McDonald’s chose to limit Tunisia to one franchisee not of the GOT’s [government of Tunisia] choosing, the whole deal was scuttled by the GOT’s refusal to grant the necessary authorization and McDonald’s unwillingness to play the game by granting a license to a franchisee with Family connections.

Tunisia has not taken fondly to the allegations reported in the cables, and last week it blocked the website of the Lebanese newspaper Al-Akhbar, which had published the cables, the Guardian reported.