The Swiss-born grandson of the Muslim Brotherhood's founder made his career trying to prove that the West and Islam, secularism and belief, can coexist peacefully. With his George W. Bush-era travel ban revoked, Tariq Ramadan has now journeyed back to the United States, where his faith in faith has been put to the test by a painful year for American Muslims. 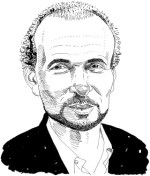 I grew up in a very liberal family. I was left alone to decide whether to pray or not to pray. I was very interested in solidarity work so I went to South America after graduation. I started an interfaith dialogue, and this is where faith came back to me. It was seeing the poor and how they remained dignified and retained their faith. It was an answer to my quest.

In Germany, Angela Merkel has said that multiculturalism failed. But it has not failed. The facts and figures are showing that it’s working. It’s only in our mind that Muslims and Westerners aren’t integrating. But the true success of integration is to not talk about integration.

When Bush called Islam a religion of peace, it didn’t mean anything. He could have said that Islam is a religion of war, just as much as Christianity or Judaism. When I travel in Muslim-majority countries, I tell them: We are not victims. But they are nurturing a sense of victimhood.

The war in Afghanistan is a lost battle. The Americans are not going to win. They have already lost. For Muslim nations, the problem is that the frustration with the United States is so deep they are just happy it is failing. But they don’t understand that what could come out of Afghanistan might be worse than what we had before.