The AK-47 of the Cell-Phone World

Forget iPhones and Droids: The Nokia 1100 is the most important cell phone on the planet. 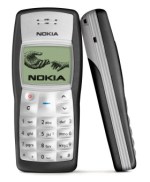 The iPhone vs. Android vs. BlackBerry wars may get all the attention in the Western press, but for most of humanity, smart phones are an impractical luxury. Thanks largely to exploding cell-phone markets in Africa and South Asia, the world’s most popular phone — by far — is the humble Nokia 1100. Introduced in 2003, an eternity ago in tech years, the 1100 doesn’t do much more than make calls and text, and it’s not particularly attractive — but don’t tell that to its more than 250 million users. Until networks in the developing world can handle the bandwidth requirements of smart phones, the Nokia 1100 will remain the telecommunications version of the AK-47 — humanity’s most rugged, efficient calling machine.