Why Mexico -- and the rest of the world -- is getting less democratic. 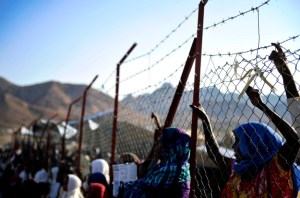 In a year that saw an overall rollback in democracy and human rights in the world, the most shocking decline may have taken place just south of the U.S. border, according to the most widely cited index of global freedom. Freedom House’s annual Freedom in the World index, released on Thursday, shows overall global freedom declining for the fifth year in a row — the longest period of continuous decline in the index’s nearly 40-year history.

Freedom House scores 194 countries and territories around the world on their levels of political rights and cultural liberties, assigning each a designation of free, partly free, or not free. This year, Mexico and Ukraine dropped from free to partly free while Ethiopia and Djibouti fell to not free. In total, 25 countries showed significant declines in their scores this year while only 11 improved.

But the decline of Mexico, which 10 years ago emerged from decades of one-party rule following the election of Vicente Fox, may be the biggest surprise on the list. Mexico’s fall is all the more unusual because it results not from repressive measures by the government, but from the state’s failure to “protect ordinary citizens, journalists, and elected officials from organized crime,” as the report puts it. Freedom House’s director of research, Arch Puddington, described the decline in freedom due to Mexico’s drug violence as nearly unprecedented.

“Our report measures conditions on the ground,” he said. “If you’ve got an insurgency or out-of-control crime or acts of God, it can affect your score. My sense is that Mexico’s response has been ineffective and not always prudent. We don’t sit in judgment given the immense challenges they face, but they can’t bring the violence under control and it affects the day-to-day freedom that the Mexican people experience.”

Ukraine’s fall into the “partly free” category means that outside the Baltic countries, there are now no free countries left in the former Soviet Union — a grim milestone, 20 years after the fall of Soviet communism. Freedom House’s decision was based not on the election of pro-Russian President Viktor Yanukovych, which Puddington described as a “good election,” but on crackdowns on foreign-funded NGOs and media outlets that have taken place since he came to power. Ukraine was also the last of the “color revolution” countries — which experienced democratic upheavals in the mid-2000s — to fall from the free category. It should be noted that all three countries — Ukraine, Georgia, and Kyrgyzstan — are, despite their flaws, still classified as “partly free,” while nearly all their neighbors are still very much “not free.”

Of course, Russia’s role in its neighbors’ democratic slide can’t be ignored.

“Yanukovych had made it very clear that he doesn’t want to alienate the EU. At the same time he has felt free enough to begin the process of smothering the opposition and marginalizing the NGO sector and controlling the press, and I think he’s done this because he knows he has protection from Russia,” said Puddington. “No matter what he does, he knows he has Russia there at this back.”

The power of wealthy autocracies like Russia, China, and Venezuela to reinforce bad behavior in smaller undemocratic regimes through trade and obstructionism at the United Nations has been a main theme of Freedom House reports for several years running. But this year, the authors also highlight the role played by emerging economic powers like Brazil, South Africa, and India — robust democracies that nonetheless seem utterly disinterested in promoting democracy internationally.

“Those three have been neutral and perhaps negative actors,” said Puddington. “[Former Brazilian President] Lula [Da Silva] certainly was an enabler for Iran and also for Venezuela. South Africa — even though the black majority relied so heavily on the international measures taken against the apartheid government — they feel no sense of solidarity with other people who are suffering in the developing role. India is just completely realpolitik. In its own region, it could certainly help in Burma, but chooses not to.”

Puddington hopes that Brazil’s approach might change under newly elected President Dilma Rousseff, who has already indicated that she may back away from the friendly relationship with Mahmoud Ahmadinejad’s Iranian government established by her predecessor.

But if the BRICs can’t be relied on to get the job done, what about the United States? Two years into Barack Obama’s administration, Freedom House’s researchers think it’s too early to judge whether his approach is having a positive or negative effect on global freedom, but the contours of that approach are starting to evolve and take shape.

“The rhetoric has been better,” says Freedom House’s executive director, David Kramer. “The [Sept. 23 U.N. General Assembly] speech was good. [Secretary of State Hillary Clinton]’s speech in Krakow was very good. Obama’s Nobel Prize statement was very good. But to take another example, Obama issued a statement under his own name in response to Ukraine’s transfer of [highly enriched uranium]. But on the election in Belarus and the Khodorkovsky verdict, he was deafeningly silent. So you see what it is that he cares about. … The pragmatism of this administration, I think, is not going to change.”

Freedom House has also urged Obama to raise human rights at his meeting with Chinese President Hu Jintao next week, though it’re not optimistic that he will.

“We’re not particularly encouraged,” says director of advocacy Paula Schriefer. “It’s less than a week out, and we don’t have any assurance that human rights issues will be raised.”

Of course, the report doesn’t reflect particularly well on the democracy-promotion efforts of George W. Bush’s administration either. The Middle East and North Africa region, where the Bush administration devoted most of its energy, showed the greatest overall decline this year. Particularly noteworthy were the near-unanimous results of Egypt’s deeply flawed parliamentary elections, continuing crackdowns on the opposition in Iran, new restrictions on civil liberties in Bahrain and Kuwait, and the growing power of armed extremists in Yemen and Lebanon. As for the two countries where the Bush administration instituted regime change, Afghanistan declined in freedom this year, while Iraq — despite finally forming a government — remained stagnant in the “not free” category.

Kramer, who served as assistant secretary of state for democracy, human rights, and labor under Bush, thinks the administration lost its way when it took a more realist turn in its later years — around the same time global scores began to decline.

“In Egypt in 2005, [former Secretary of State Condoleezza Rice] canceled her visit because [opposition leader Ayman Nour] was in prison. We got him released. He was allowed to run for president. He lost and was thrown back in prison. And then Condi went back to Egypt. Using a strong position on Egypt in 2005 was the right thing to do, and it had an impact. Then we went back to our old ways, and we stopped raising those issues.”

One of the few bright spots for freedom this year is that Honduras, Guinea, and Kyrgyzstan, all of which recently had their governments violently overthrown, all held flawed but genuine elections this year. Overall, coups have been on the decline, and when they have taken place, have frequently been closely followed by elections.

Indeed, what may be more interesting than the overall democratic decline, according to Puddington, is how that decline is taking place.

“There are still 115 counties out of 193 that qualify as electoral democracies,” says Puddington. “Elections have not declined over the last five years. We’ve seen a lot of great elections. What’s declined has been corruption, effective governance, freedom of the press, freedom of NGOs, and rule of law. A lot of countries have found that it’s easier to hold an election than it is to build an effective government that can provide people with the services they need in a way that’s fair and honest.”

That job has only gotten harder since the global financial crisis. And while Freedom House continues to encourage the United States and other governments to discuss human rights and democracy, ultimately, bottom-line factors like the economy may have more of an impact.

“The economics are really going to have to change for us to see resurgence in the confidence of democracies,” says Schriefer. “Democracy has been appealing when other countries see it as a route to success. It’s going to take an economic recovery for countries to see that places like Singapore and China are really the exceptions. The vast majority of the not-free countries on this list are not doing well.”