Five Arab states that are ripe for revolution.

Who's in charge: Abdelaziz Bouteflika has been president of Algeria since 1999. In 2009, he amended the constitution to allow himself to run for a third term and was overwhelmingly reelected in a contest that was boycotted by the opposition. Concerns have recently been raised about the 73-year-old president's health -- the state of which is a carefully guarded state secret -- and there are rumors that his brother is looking to succeed him. Bouteflika oversaw the end of the decade-long Algerian civil war and has worked to improve relations with European and African powers, but he has also been criticized for his failure to contain an Islamist insurgency associated with al Qaeda in the Islamic Maghreb and the steady erosion of Algeria's democratic institutions under his rule. 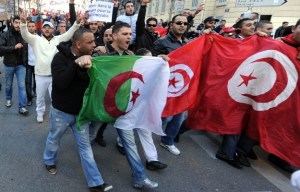 Who’s in charge: Abdelaziz Bouteflika has been president of Algeria since 1999. In 2009, he amended the constitution to allow himself to run for a third term and was overwhelmingly reelected in a contest that was boycotted by the opposition. Concerns have recently been raised about the 73-year-old president’s health — the state of which is a carefully guarded state secret — and there are rumors that his brother is looking to succeed him. Bouteflika oversaw the end of the decade-long Algerian civil war and has worked to improve relations with European and African powers, but he has also been criticized for his failure to contain an Islamist insurgency associated with al Qaeda in the Islamic Maghreb and the steady erosion of Algeria’s democratic institutions under his rule.

Warning signs: As in Tunisia, riots over food prices and widespread unemployment broke out in Algeria in early January. The unrest was sparked when the government announced a price hike on milk, sugar, and flour. Thousands of youths rioted in the capital city of Algiers, throwing rocks at security forces and burning down a police station. Algeria provides 20 percent of Europe’s gas needs, and citizens are increasingly frustrated that the revenues are not being divvied up more equitably.

By late last week, while the situation in Tunisia was coming to a head, Algeria’s sizable internal security forces appeared to have the rioting under control. Things have since taken a darker turn, with five Algerian men setting themselves on fire in imitation of Mohamed Bouazizi, the Tunisian university graduate whose suicide set off the protests there in mid-December.

Although Bouteflika’s regime is unpopular and increasingly undemocratic, it’s not nearly as repressive as was Ben Ali’s, which may make it harder for the opposition to build a mass movement for its ouster. Additionally, there are no signs that Algeria’s influential trade unions or opposition groups are willing to support the rioters — who are mostly unemployed youths at this point. Perhaps in an effort to avoid association with Ben Ali, Bouteflika has wished success to Tunisia’s new government. 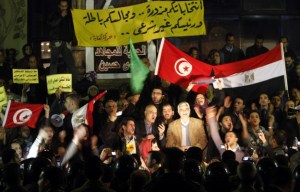 Who’s in charge:  President Hosni Mubarak has ruled in Cairo for three decades, where an emergency law, which has been in effect for the duration of his tenure, gives him free rein to manipulate the political system. But at 82 years old, it appears pharaoh’s power may be slipping. Persistent rumors of Mubarak’s ill health have spurred political jockeying — most notably between his son, Gamal, and the powerful intelligence director Omar Suleiman — over who will fill his considerable shoes.

Warning signs: Egypt has witnessed a wave of self-immolations in recent days, as outraged citizens attempt to duplicate the popular protests caused by the suicide of Mohamed Bouazizi. The third immolation came when a 25-year-old man set himself on fire on the top floor of his building in Alexandria on Jan. 18. He died from his wounds.

Earlier that same day, a 40-year-old lawyer attempted to immolate himself in Cairo after reportedly chanting slogans about rising food prices in the country. And the day before, a man lit himself on fire outside parliament while protesting against the government. Both are expected to survive. Egyptian Foreign Minister Ahmed Aboul Gheit, however, angrily dismissed suggestions that the Tunisian unrest could spread as “nonsense,” complaining that those drawing the comparison were “promoting fantasies and trying to ignite the situation” — perhaps a poor choice of words. 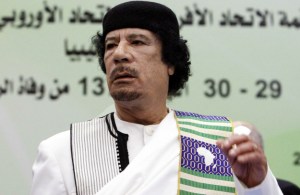 Who’s in charge: Col. Muammar Qaddafi is the world’s longest-serving head of state, having taken power in a military coup in 1969. Libya is consistently ranked as one of the world’s worst human rights abusers and least democratic countries. It is a totalitarian state with no freedom of the press and only token opposition parties; Qaddafi’s Green Book, which outlines his governing philosophy, is treated as a near-holy text. There have been some signs in recent years that internal dissent has become more tolerated and Libya has become slightly less of a pariah in international affairs since dismantling its nuclear weapons program. These reforms may be driven by Qaddafi’s son Saif, whose political views are a fair bit more democratic than his father’s and is believed by many observers to be the heir apparent.

Warning signs: It’s hard to get reliable information out of Libya, but there have been reports — as well as some videos posted to YouTube — of protests in the city of al-Bayda, including chanting crowds and fires in recent days. Street protests used to be a nearly unheard of event in this highly repressive state. Likely in an effort to head off the food-price surges that provoked riots in neighboring Algeria and Tunisia, the Libyan government has slashed duties on imported food.

On Jan. 15, Qaddafi directly addressed the events in Tunisia in a televised speech, asking why the rioters are “destroying” the “transformation that was achieved in Tunisia.” He also blamed “WikiLeaks, which publishes information written by lying ambassadors in order to create chaos.” The leaked State Department cables have been pretty rough on the Libyan leader as well, with one of the most famous describing his close relationship with his “voluptuous blonde” Ukrainian nurse. It seems the fall of the government in Tunis was taken quite personally by Qaddafi, who was described as “my dear brother” in one of Tunisian President Zine al-Abidine Ben Ali’s last speeches.

In addition to the scenes on the Libyan streets, it’s also worth keeping an eye on the turmoil within the Qaddafi family itself. There are indications that regime hard-liners associated with Saif’s younger brother Mutassim, who heads one of Libya’s powerful security agencies, is pushing back against his older brother’s reform agenda. In recent days, Saif has been forced to step down from a human rights charity he led, and journalists working for one of his newspapers have been arrested. Further instability could provide an opportunity for either brother to edge the other out of pole position. 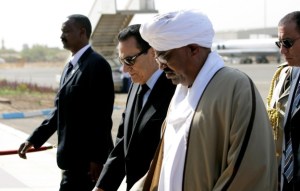 Who’s in charge: During his two decades in power, President Omar al-Bashir has become a master of the divide-and-conquer strategy, expertly splitting opponents and fracturing political threats to his regime. A north-south civil war dominated his attention for his first 15 years in office. Then, in the early 2000s, he kept Darfuri rebels at bay by arming janjaweed militias to fight back, according to an International Criminal Court warrant against Bashir for war crimes.

Southern Sudan is currently awaiting the results of a referendum on whether to split from the north. Bashir has promised to respect the results of the vote, though no one quite knows if he’ll stick to his word. The one region where Bashir has remained popular is in the north, where the capital Khartoum lies — though frequent press crackdowns and intimidation of the opposition have certainly boosted the ranks of his self-described supporters. Bashir handily won reelection in last year’s presidential ballot — after many opposition parties withdrew, fearing that it wouldn’t be a fair contest.

Warning signs: Even in his traditional stronghold, Bashir may be running out of friends. As protesters in Khartoum took to the streets on Jan. 17, Sudanese opposition leader Hassan al-Turabi had a message for Bashir. “What happened in Tunisia is a reminder,” he told AFP. “This is likely to happen in Sudan … If it doesn’t, then there will be a lot of bloodshed.”

Indeed, despite his characteristic strength, the threats against Bashir are mounting. On Jan. 9, the country’s south began voting in a referendum that will likely see their secession from greater Sudan. The stakes are particularly high for Bashir because much of the country’s oil wealth lies south of the presumed border (which is yet to be officially demarcated). Even in northern Sudan, discontent is brewing over the economy. Bashir is struggling to control a current account deficit, which his administration has tried to combat by ending certain subsidies on fuel and basic goods. Students flooded the streets to protest the price increases.

Still, there is likely no revolution around the corner for Sudan. Turabi was arrested on Tuesday morning, along with a slew of fellow opposition members, after he publicly praised the Tunisian uprising and called for reform in Sudan — Bashir’s not-so-gentle reminder that, for the moment, he’s still the one in power. 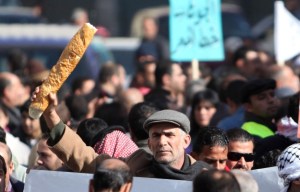 Who’s in charge: Jordan’s King Abdullah II is a significant U.S. ally and an important interlocutor for Israel on the Mideast peace process. The American-educated and Star Trek-loving Abdullah is the fourth member of the Hashemite dynasty to rule Jordan since World War II. However, an unpredictable new parliament and double-digit unemployment have led some analysts to question his grasp on power.

Warning signs: On Jan. 16, over 3,000 Jordanians gathered outside parliament in the capital city of Amman to protest the regime’s economic policies. “Jordan is not only for the rich. Bread is a red line. Beware of our starvation and fury,” read one of the protester’s signs. Prime Minister Samir Rifai’s government, which the protesters were calling on to resign, had already announced a $225 million package of additional subsidies to basic goods, such as sugar and rice. However, protesters have refrained from directly criticizing the monarch, likely due for their fear of a violent reaction from Jordan’s security services.

Jordan’s Queen Rania also received a hostile response from some online denizens after she tweeted that she was “Closely watching developments in #Tunisia and praying for stability and calm for its people.” One Twitter user responded that she should “start palace hunting in Jedda,” the city in Saudi Arabia where the deposed Tunisian president is currently hiding out.