A Farewell to India’s Henry Kissinger

K. Subrahmanyam's pragmatic recommendations had a direct bearing on some of New Delhi's most profound national security decisions of the last half-century. 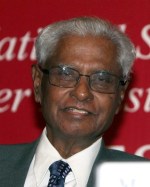 India’s most respected guru of strategic and nuclear affairs, K. Subrahmanyam, passed away on Feb. 2, 2011, at age 82. In his lifetime, he came to wield a profound global influence that few Indian policy thinkers can claim. His analysis of India’s difficult strategic environment was repeatedly borne out by events; his pragmatic recommendations had a direct bearing on some of New Delhi’s most profound national security decisions of the last half-century.

Subrahmanyam’s career as scholar, advisor to governments, and policymaker spanned the pivotal six decades from India’s independence to its emergence as a major power. And his forging of a realist worldview in the nation of Gandhi and Nehru — and his ability to make his ideas consistent with their thoughts — was central to that development. He was an early and controversial advocate of New Delhi developing an atomic bomb, although he also advised the government to shackle it with an explicit policy of “no first use” — in both cases, his advice won the day. Although he was labeled a nuclear hawk in the 1970s and 1980s, both in the domestic press and in international nonproliferation circles, he later surprised many by becoming in recent years India’s most prominent voice in support of the campaign for a nuclear-weapon-free world championed by U.S. elder statesmen Henry Kissinger, George Shultz, William Perry, and Sam Nunn. But this position was actually consistent with his larger goal — for India to work credibly on the global stage. In this sense, to be a player in the anti-nuclear game, it helped to have actually achieved building the bomb.

Age did not ossify his thinking. Once a pointed Cold War critic of U.S. policy, Subrahmanyam strove successfully in his later years to convince skeptical compatriots that rapprochment with Washington — underpinned by the historic 2010 U.S.-India civil nuclear deal — would be a great victory for India’s national interest.  In one of his final media interviews, he defined this partnership of democracies as a natural way to counter both authoritarianism and Islamist extremism. The United States, he said, “does not have much of an option but to make India its leading partner.”

Krishnaswamy Subrahmanyam arrived in New Delhi from his southern home state of Tamil Nadu in 1951. He was then a young recruit to the elite Indian Administrative Service, a chemist with a piercing intellect who had achieved top scores in the highly competitive national civil service examination. After the 1962 border war with China — a humiliation for Nehru’s India — and the shock of Beijing’s subsequent nuclear tests, the young Subrahmanyam sharpened his interest in security issues. By 1966, as a midranking defense official, he had become a player in an informal committee on India’s nuclear policy options, and two years later, he was appointed to head a new think tank, the Institute for Defence Studies and Analyses, meant to fill what was then a glaring gap in Indian security research and policy innovation.

From this post, Subrahmanyam made a name for himself with bold statements to India’s civilian and military establishment. He warned, for instance, about Indian military unpreparedness before what became the 1971 conflict with Pakistan and — as Indians proudly call it — the “liberation” of Bangladesh. But his most forceful foray into India’s hesitant national security debate was his advocacy of nuclear weapons. In his landmark study, India’s Nuclear Bomb, George Perkovich notes that in 1970 — the year of the Nuclear Non-Proliferation Treaty — Subrahmanyam openly called for an Indian nuclear deterrent against possible future coercion by China. Extraordinary at the time, this view became the official rationale for the 1998 nuclear tests and now can be assumed to inform New Delhi’s strategic policy as China’s rise continues apace.

But, again, it would be grossly unfair to caricature Subrahmanyam as a China hawk. In 2009, he prominently championed an Indian naval chief who had urged India not to impoverish itself by trying to compete directly with superior Chinese military might. Instead, both argued, a restrained, affordable strategy of asymmetric deterrence should suit India just fine.

As he joined the recent global chorus of pro-disarmament realists, this herald of India’s atomic arsenal changed his focus, though not his fundamental thinking. I knew him through his later work on nuclear abolition, including his support for a revival of Rajiv Gandhi’s 1988 global disarmament plan, and I recall him arguing over lunch at his beloved India International Centre a few years ago that interdependence was helping render large-scale war between major countries obsolete. Instead, there was a new danger: nuclear terrorism. Subrahmanyam had once claimed to be comfortable with Pakistan’s nukes, as a stabilizing tool of mutual deterrence, but it seems that the threat of atomic jihad was a consequence nobody in 1970 could foresee.

He also expanded upon a long-overlooked part of his own intellectual mantra: Nuclear weapons were not for fighting. Indeed, he argued, the case for nuclear abolition could be advanced by establishing dialogue between militaries, in which they would come to agree on the “unfightability” of nuclear war. One suspects he had a hard time selling this idea to his interlocutors in Pakistan, a country that sees its own nuclear armory as a weapon designed to balance and deter India’s stronger conventional forces.

In any case, the most obvious shift in Subrahmanyam’s outlook came with his approval of Washington’s embrace of New Delhi as a strategic partner during the George W. Bush’s administration. Once the wheels began moving on the U.S.-India nuclear deal in 2005, there was suddenly no more need to speak of “nonproliferation ayatollahs” enforcing “nuclear apartheid” — terms Subrahmanyam, incidentally, is said to have coined.

There was, of course, much more to his career. He served as chairman of India’s Joint Intelligence Committee and held several senior bureaucratic positions, responsible at various times for defense production and for his home state of Tamil Nadu. He had a second stint as director of IDSA in the 1980s, was a visiting professor at Cambridge University, and held senior editorial roles in the Indian press. Internationally, he served on multilateral study groups and was a prominent figure in the Pugwash movement against nuclear weapons and warfare.

After a Pakistani incursion at Kargil led to war in 1999, Subrahmanyam headed a wide-ranging review committee into preventing future such security breaches. It called for major reforms to India’s defense and intelligence apparatus — some of them eventually implemented. And as convener of a National Security Advisory Board, he saw his thinking on a restrained nuclear posture reflected in India’s draft nuclear doctrine — much of it incorporated into formal policy in 2003.

All the while, his work was informed by a deep sense of modern-day dharma. Accolades and wealth were not his goals. His ethos was democratic and egalitarian. Already long retired from formal government service, he is reported to have declined a national honor in 1999 on the grounds that journalists and bureaucrats should not accept such awards, lest it affect their impartiality. Although his official roles were mostly in service of Congress Party governments, he commanded respect across India’s political spectrum.

Subbu, as he was affectionately known, will be mourned by generations of Indian officials and strategists. Many knew him personally as a mentor. He will be remembered as the grandfather of Indian foreign-policy realism. And however history may judge his ideas, his influence, intelligence, and sense of duty are beyond question. The emerging India needs more like him.

Spies Are Fighting a Shadow War Against the Coronavirus

Are the Markets Underestimating the Coronavirus Depression?