The world leaders (outside of Egypt) who are freaking out the most.

While the political earthquake rumbling through the Middle East began in Tunisia, when the people took to the streets in Egypt, unrest became a trend rather than an isolated event. In addition, Egypt's unique role among states in the region -- historically and due to the size of its population -- amplified the importance of the demonstrations that have filled the streets of Cairo, Alexandria, and the rest of the country for this past week.

Even before President Mubarak's decision to end his 30-year rule, Egypt's crisis had earned the undivided attention of leaders across the Middle East. King Abdullah of Jordan's sacking of his cabinet and Yemeni President Ali Abdullah Saleh's announcement that he too was not going to seek to extend his three-decade-long tenure in office indicated that both men recognized the fuse that was lit in North Africa was connected to stacks of dynamite on which they were sitting. 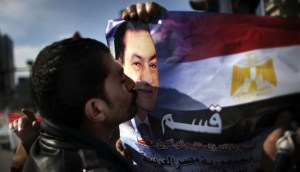 While the political earthquake rumbling through the Middle East began in Tunisia, when the people took to the streets in Egypt, unrest became a trend rather than an isolated event. In addition, Egypt’s unique role among states in the region — historically and due to the size of its population — amplified the importance of the demonstrations that have filled the streets of Cairo, Alexandria, and the rest of the country for this past week.

Even before President Mubarak’s decision to end his 30-year rule, Egypt’s crisis had earned the undivided attention of leaders across the Middle East. King Abdullah of Jordan’s sacking of his cabinet and Yemeni President Ali Abdullah Saleh’s announcement that he too was not going to seek to extend his three-decade-long tenure in office indicated that both men recognized the fuse that was lit in North Africa was connected to stacks of dynamite on which they were sitting.

But it could well be that the forces unleashed by these unlikely people-power revolutions are just starting to be felt. Countries and leaders around the world are wondering aloud what this means for them. Some more than others. Here are the 10 people (outside Egypt and Tunisia) most unsettled by the past week’s developments.

China’s vice president and the anointed successor to China’s president, Hu Jintao, is a princeling, a son of the country’s revolutionary leadership who has worked himself up through Fujian, Zheijang, and Shanghai provinces to be on the verge of taking over a rising superpower. Looking to Egypt he must wonder, however,whether that will be a blessing or a curse. Will he lead the next chapter of China’s emergence, or will he be faced by popular resistance to a political structure that is incompatible with the openness and freedoms required of a burgeoning modern economy? Street demonstrations are nothing new to China … the question is whether street demonstrations plus new communications technologies plus growing aspirations are a formula for unrest in the world’s most populous nation.

Top dog in the band formerly known as SLORC has just announced he is not seeking the presidency in Myanmar. But he is expected to remain in charge. Is he not seeking the high-profile job because he doesn’t want to disclose too much about his finances as some have speculated? Or is it that he doesn’t want any more of a target on his forehead than necessary when that country’s democracy movement gains enough momentum to finally bring an end to his regime? Is his hesitance a deft political move or a sign of concern? In either case, this is a junta that knows for whom those metaphorical bells may be tolling in Cairo.

Pakistan’s president is not a dictator and is certainly not on this list like many of its other occupants because he or his party have held too firm a grip on power in his country for too long. Rather, he is on it because he is so weak that every time a small group gathers for a cup of tea and a chat about politics (or the weather) in the streets of Islamabad or Lahore, he must wonder if it is the beginning of the political movement that will spell the end to his career. Right now, he has the advantage of some important military and international support, but there is no one close to him that has not spent considerable time devising a good Plan B for the day after he leaves (or is removed from) office.

Syria’s president, Bashar, came to power the old-fashioned way; he inherited it from his father. Looking around him (and up and down this list), he too must be wondering if that was a mixed blessing … especially as he considers how to respond to calls from Syrian opposition groups to make Friday a “day of rage” in Damascus, emulating precisely the Egyptian and Tunisian formulas. In a move no doubt envied by parents around the world, his government has long maintained a ban on Facebook, but with other social networking options proliferating, it is unclear whether he can use old dictatorial tools to keep a lid on a newly connected, more openly communicative citizenry.

Qaddafi is one revolutionary leader who is no fan of wannabe rabble-rouser Julian Assange. WikiLeaks revelations of Qaddafi’s excesses and his fondness for buxom East European nurses have raised questions about whether he will bring this storm that started in North Africa to another destination in the greater Maghreb. The U.N. (and Saturday Night Live‘s Fred Armisen) might miss his flamboyantly deranged speeches, but it is clear many closer to home in the downtown Tripoli area would not. And that’s why he is among those watching so closely to see which way the winds are blowing from Tahrir Square.

King Abdullah of Saudi Arabia is very old and very rich. You would think both of these things would be of some comfort in the current situation. But with an extended royal family numbering in the thousands, he is feeling the pressure as many wonder whether the succession-related turbulence many have predicted for years is accelerated by the mob scenes in Cairo and Tunis. Saudis confidently proclaim their situation is different, that they have more resources and thus a happier populace — and there is no minimizing the fact that Egyptian unrest pushing up oil prices actually strengthens them in some way. But this is a regime that has shamefully neglected the welfare of masses of its people and has played with fire while nurturing extremists. It may be more fragile than it looks.

Mahmoud Ahmadinejad has seen this movie before. In fact, the last time it played, he was the villain and young Neda was the tragic star. With a cosmopolitan population eager for reform, a national tradition of uprisings, and a divided government in which he does not necessarily have the full support of all the powers that be, the world’s foremost windbreaker model can’t help but be nervously wondering when “Green Revolution: The Sequel” starts playing in Tehran and in cineplexes across Iran.

Saleh has already blinked, nervously renouncing any aspirations to seek another term in office. Yemen has already seen street marches, and the country is a hotbed of extremist groups, like al Qaeda, that like to express themselves somewhat more colorfully than with banners and chants. Topping everyone’s list of desert nations most likely to become a failed state, Yemen is holding its breath today.

King Abdullah of Jordan has also made political moves designed to forestall questions about how much longer an overprivileged over-Westernized family from a minority segment of Jordan’s population can continue to cling to a throne that was pulled directly out of Britain’s post-imperial goody bag. Abdullah and his wife Rania are so popular in the West, so articulate, so sophisticated that it has proved too easy for their allies to enjoy cocktails and avoid the issue of pushing hard enough on long-overdue political reforms. Strategically vital, attracting the attentions of Iran’s surrogates, already rattled by Palestinian politics to its west and Iraqi politics to its east, Jordan is the country after Egypt where the likelihood of change and the uncertainty of its implications are producing the most worldwide anxiety.

Israel’s prime minister may well be having what Judith Viorst would call a terrible, horrible, no good, very bad year. You’d think that the region’s only democracy would embrace the stirrings of people power on its borders. But with Egypt’s direction uncertain and its peace with Israel at risk, that alone should make Netanyahu uneasy. Add to that the Hezbollah takeover of Lebanon, risks of uprisings in Jordan, the way these uprisings have distracted from efforts to contain Iran’s nuclear program, and the potential further shift in global sympathies that might follow moves toward democracy among several Arab states, and Bibi faces a potentially seismic shift in Israel’s strategic position unequaled in nearly a half-century. As one worried, smart, well-known Israel-watcher said to me the other day, “They shouldn’t have located Israel in the Middle East. Too dangerous. They should have put it in the Middle … West.” For sure, if Kansas and Nebraska were his neighbors, Bibi Netanyahu would be a much more relaxed man today.

It’s a long list. Dictators, autocrats, weak leaders, and their neighbors everywhere have been made deeply uneasy by the energy, bravery, and effectiveness thus far of the people in Cairo’s streets. The longer list of nervous observers extends from Hugo Chávez in Caracas to Raúl Castro in Havana to Pyongyang’s jaunty, otter-hat-festooned Kim family. In fact, it is the length of the list and the depth of the nervousness felt by its members that makes the story of the past two weeks’ upheavals so compelling and important.

That said, it cannot be overemphasized that with the outcomes of uprisings in doubt everywhere, democracy proponents everywhere ought also to be nervous. If force is proved to once again be an effective suppressant of popular aspirations, in many of these edgy countries instead of progress we might well see the elevated hopes of the past couple of weeks followed by a new era of renewed, even harsher repression.

David Rothkopf is visiting professor at Columbia University's School of International and Public Affairs and visiting scholar at the Carnegie Endowment for International Peace. His latest book is The Great Questions of Tomorrow. He has been a longtime contributor to Foreign Policy and was CEO and editor of the FP Group from 2012 to May 2017. Twitter: @djrothkopf
Tags: Economics, Egypt