Anatomy of a Dictatorship: Hosni Mubarak

The many repressions of Egypt's 30-year-president. 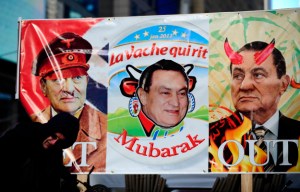 History’s first verdict on Egyptian President Hosni Mubarak was rendered late Tuesday night, Feb. 1, when thousands of protesters forced the autocrat to vow not to run for office again. The president, they chanted, had to go. On Friday, Feb. 11, after some prevarication, Mubarak appeared to have finally taken the point.

From police brutality to persecution of minorities, from the arrests of journalists to the suppression of political dissent, Mubarak’s Egypt has been a textbook police state. For 30 years, anger and frustration brewed among his subjects, bottled up and sealed with fear.

Over the past three decades, Mubarak did not personally torture alleged criminals or beat protesters in the street. But as Joe Stork, deputy director of Human Rights Watch’s Middle East and North Africa division, told me from Cairo, Mubarak’s repression was simply “delegated to the Ministry of Interior and various security services. At the end of the day, he’s the final address for all this.” As we bid farewell to a dictator, here’s a look back at his ugly history of repression and cruelty.

Police brutality: Egypt’s protests kicked into high gear, not so coincidentally, on Jan. 25, the country’s official “Police Day” celebration. For three decades of Mubarak’s rule, the police have acted as the regime’s primary implementers of repression: Thousands of Egyptians have been arbitrarily detained, arrested, beaten, and held without charge by the police for trumped-up offenses. According to a Jan. 31 Human Rights Watch (HRW) report, the security forces have targeted everyone from “political dissidents, Islamists allegedly engaged in terrorist activity, and ordinary citizens suspected of links to criminal activity or who simply look suspicious.” Last June, a young man named Khaled Said was beaten to death by policemen after he refused to show his identity card upon entering an Internet cafe in Alexandria.

Many attribute the police’s misconduct to the country’s emergency law, which has been in place almost continuously since the assassination of Mubarak’s predecessor, Anwar Sadat, in 1981 and gives Egypt’s Interior Ministry and State Security Investigative Service (SSIS) the ability to detain anyone without charge. Diplomatic cables released by WikiLeaks and written as recently as last year show that American officials also pointed to the police force’s relative unprofessionalism. “Police brutality in Egypt against common criminals is routine and pervasive,” one January 2009 cable reads. “Contacts describe the police using force to extract confessions from criminals as a daily event, resulting from poor training and understaffing.” The account goes on to say that “security forces still resort to torturing Muslim Brotherhood activists who are deemed to pose a political threat.”

As the past week’s protests have grown, so too has the police abuse. Many now believe that members of the police, dressed in civilian clothing, were at least partially responsible for the looting during the early protests and Wednesday, Feb. 2’s violent attacks against pro-democracy demonstrators.

Torture: Once in the custody of the security forces, prisoners are often subject to “beatings, electric shocks, suspension in painful positions, forced standing for long periods, water-boarding, as well as rape and threatening to rape victims and their families,” HRW reports. Over the last two decades, the Egyptian Organization for Human Rights has followed 460 torture cases, including 125 that led to death between 2000 and 2009 alone. Since 1992, 73 people have been “disappeared.”

Torture is widely used to extract confessions to all variety of crimes. Most infamous are the instances of “renditions,” in which Egyptian authorities have interrogated alleged terrorists and enemy combatants captured by U.S. forces using methods that would be illegal on American soil. Mubarak’s newly appointed vice president, Omar Suleiman, a former chief of the intelligence service, oversaw dozens of such renditions, according to Pulitzer Prize-winning journalist Ron Suskind. “When [the United States] wanted someone to be tortured, we’d send him to Egypt to have them tortured,” Suskind recently told ABC News.

Accused Islamic radicals aren’t the only ones subjected to such treatment in Egypt. According to a February 2010 diplomatic cable released by WikiLeaks, in murder cases, “police will round up 40 to 50 suspects from a neighborhood and hang them by their arms from the ceiling for weeks until someone confesses.” A separate cable from 2009 notes that “NGO contacts estimate there are literally hundreds of torture incidents every day in Cairo police stations alone.”

Victims of torture have little redress. Many alleged criminals are tried under a military court system, and as such, have no access to the usual protections of a civilian court. Even in the regular judicial system, prosecutions are arduous and still subject to pressure from the regime. In 2009, a diplomatic cable reported that the Egyptian government, along with Mubarak’s ruling National Democratic Party, was “flood[ing] the courts with suits against political enemies, using tactics such as fabricating assault charges against a journalist and filing a profanity case against a novelist.” 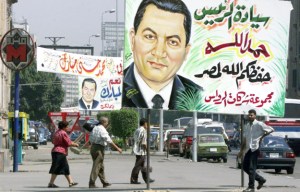 Political repression: Since 1981, Mubarak has officially won four presidential terms with overwhelming popular support. But the first three of those were uncontested; the fourth was slightly freer — at least there were other candidates on the ballot, including opposition leader Ayman Nour — but still not a fair contest: The largest opposition group, the Muslim Brotherhood, was, and still is, outlawed.

Sham elections are only the beginning. It’s also nearly impossible to form a political party, much less run for office as an independent. Parties that want to put forth candidates for the presidency have to have existed for at least five years and hold 3 percent of the seats in the People’s Assembly and the Shura Council, the Egyptian equivalents of the U.S. House and Senate, respectively. Independents need 250 signatures from the ruling-party controlled Parliament to get on the ballot.

Even if a candidate manages to successfully jump through all of these hoops, the Political Parties Commission, which is responsible for registering parties, has broad authority to close offices, seize funds, or refuse to recognize a party in the first place — meaning that in practice, elections are only as competitive as Mubarak wants them to be. Political opposition parties, as well as civil society groups and NGOs, are also targeted by government moles; a 2010 U.S. State Department cable released by WikiLeaks claimed that the “Interior Ministry uses the SSIS to monitor and sometimes infiltrate the political opposition and civil society, and to suppress political opposition through arrests, harassment and intimidation.”

And when all else fails, Mubarak always has the threat of Islamic extremism to fall back on. The Muslim Brotherhood, historically Mubarak’s only significant political challenger, is also his favorite bogeyman: Egyptian security forces have a long history of arresting the group’s members, and Mubarak has routinely painted a picture of the group as a violent and extreme Islamist group to win aid from the West, which needs Egypt’s moderate voice in Israeli-Arab relations.

Free Speech: Everything you need to know about press freedom in Egypt you could have learned in the last week. As opposition to the Mubarak regime grew in the streets, the government tried every means available to keep the media quiet. Security forces arrested, attacked, and threatened journalists. The government cut off most television frequencies, even temporarily shutting down the news station Al Jazeera. Cell phone networks were turned off, and the entire country’s Internet went black.

Even when the regime has been under less pressure, journalists have often been arrested, threatened, and detained. A 1996 press law makes defamation, insult, and libel punishable with jail sentences. In recent years, as opposition figures have turned to the Internet to organize, the regime has cracked down on bloggers. In 2008, for example, blogger Mohamed Refaat was arrested for months after authorities claimed that he had incited a demonstration- even though he had never mentioned the protest in his writing. On Thursday, Al Jazeera and other media reported further blogger arrests, part of a broader media crackdown. Demonstrations have also been effectively curtailed: “Although the Egyptian constitution protects the right to freedom of association, the government has used a complex set of interlocking laws, decrees, and emergency powers to stifle the exercise that right,” explained a 2005 HRW report.

Academia isn’t safe, either: Since the state controls promotions, appointments, and university administration, a subtle self-censorship prevails. Professors have been fired, publicly condemned, or even physically assaulted if they stray from a government line. In one high-profile case in 1995, a court found Nasr Hamed Abu Zeid guilty of apostasy, forcing him to flee the country. Student leaders have faced similar consequences when they organize.

Women and Minorities: Anyone watching the past week’s protests may have noticed the lack of women on the streets. While gender equality is a concern in plenty of countries — even plenty without repressive regimes — there are reasons to be particularly worried about women’s rights in Mubarak’s Egypt, where reports of sexual abuse, harassment, and assault against women by government security forces are rampant. A report published by the Egyptian Center for Women’s Rights in 2008 noted that more than four-fifths of all Egyptian women had suffered public sexual humiliation — everything from groping to full-blown assault. Legal inequality doesn’t help; women have to work through an arduous process to file for divorce, for example, while men can do it without ever setting foot in court.

Gays and other minorities have also been targets of persecution in Egypt in recent years. In 2004, HRW documented the mass arrest of men accused of homosexuality. And while homosexuality itself isn’t illegal, homosexual acts are, and detention is often justified under the broad laws governing “moral conduct” throughout society. Tensions between the police and the Egyptian Christian community, meanwhile, have boiled over several times in recent years, most recently in January, when Christians clashed with the police after an officer shot a Christian on a train. (Islam is the official state religion, though free practice of religion is legally allowed.)

Finally and perhaps most disturbingly, are reports of the regime’s treatment of street children, of which there are an estimated 5,200 in Cairo. In 2001, HRW estimated that 11,000 street children had been arrested and frequently detained for weeks in unsanitary and dangerous conditions, “often with adult criminal detainees who abuse them.” The children, the report reads, are “and denied adequate food, water, bedding, and medical care.” This is how the father of Egypt, as Vice President Suleiman called Mubarak today, treats his children.

America’s Schizophrenic Russia Policy Is Unlikely to Improve Under Biden