The families of suspected Islamist guerrillas in the North Caucasus have always faced harassment from Russian security forces. Now a shadowy vigilante group has started targeting them as well.

VOLNY AUL, Russia — What happens to the family of a suspected killer? 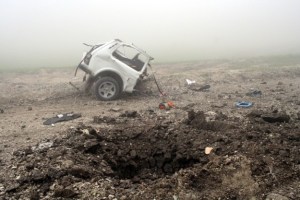 VOLNY AUL, Russia — What happens to the family of a suspected killer?

On Feb. 6 in a shabby suburb of Nalchik, the capital of Kabardino-Balkaria, Marina Mamisheva found out. Around 3 a.m., she told me, she heard a “big bang” and her bedroom windows burst. Someone had tossed four Molotov cocktails into her front yard. When she ran outside, flames were licking up her porch. One of the bottles had hit its target, setting fire to the plastic siding of her house.

Inside, Marina’s eldest son Kantemir, 30, scooped his two children off their bed onto the floor, awaiting more explosions. When none came, he and his pregnant wife followed Marina into the yard and helped her douse the blaze. In the chaos, they didn’t find the note glued to their steel gate until later: “If your son kills another resident of the republic of Kabardino-Balkaria, you will be destroyed,” it read in typed letters. The letter was signed, “The Black Hawks — Anti-Wahhabis.”

“We are living in some kind of nightmare,” said Marina.

Marina’s 22-year-old son, Astemir, is a suspected Islamist guerrilla whom she says she hasn’t seen for two and a half years, since he set out for work with a friend in fall 2008 and never came home. He is wanted by police for the recent murder of the republic’s mufti, a moderate who had spoken out against Muslim fundamentalists and was shot dead on the doorstep of his home on Dec. 15.

Investigators believe Astemir also killed a prominent businessman six weeks earlier (a surveillance camera recorded him at the scene, they say) and may be linked to the fatal shooting of a prison official at the end of November. Newspapers in Nalchik call him the rebels’ “No. 1 assassin” in Kabardino-Balkaria.

Marina and her two other sons don’t dispute this may be true, though they’re shocked to think it. They told me Astemir had shown no signs of sympathizing with the militants — often called Wahhabis — who have terrorized Russia’s North Caucasus, a sweep of hills and steppe in the south of the country that is home to Europe’s most determined Islamist insurgency. He had a girlfriend and had just started a small business refitting balconies in Soviet-era apartments. It was a successful venture: Many people in Russia like to close off their balconies, creating a small room for junk or drying clothes.

“Astemir was a very trusting boy,” said Marina. “Maybe that’s why he fell into their clutches.” She heard on television that the militants pump their recruits with drugs so they become “zombies.”

Whatever it was that drove him away, Astemir is lost to his family. “We have disowned him,” said Marina with tears in her eyes. “If he came back now, his brothers would deal with him before he even got to the police, the trouble he’s brought them. He will always be my boy, but I have never sought to justify his actions. If he’s guilty of all these horrors, then I utterly condemn it. So why pick on us?”

Marina’s words have been echoed again and again by the relatives of suspected rebel fighters, or boyeviki, across the North Caucasus.

Human rights groups have cataloged thousands of abuses of civilians by Russian security forces since the wars in Chechnya in the 1990s, when soldiers beat and tortured Chechen men at temporary filtration camps. Often the aim was to force innocent victims to confess the names and whereabouts of relatives among the separatist fighters.

In recent years, a more common tactic has been to try to persuade guerrillas to give themselves up by abducting their family members. In December 2004, pro-Kremlin Chechen militia seized seven relatives of Aslan Maskhadov, then the rebels’ leader, and held them for six months. Doku Umarov, the militants’ current chief who ordered the Domodedovo airport bombing in Moscow last month, is said to have swerved toward more radical Islam in 2007 after security operatives kidnapped and later reportedly killed his father.

In 2008, Ramzan Kadyrov — the president of Chechnya whose militia was accused of most such abductions — went a step further. His men began burning the homes of fighters’ families (there were 25 cases in less than a year). “Those families that have relatives in the woods are all collaborators in the crime; they are terrorists, extremists, Wahhabis, and devils,” Kadyrov explained in a meeting with his cabinet. Such people should be “cursed and ousted,” he said.

There are, of course, better ways to approach the families of young men who have “gone to the forest,” as locals euphemistically put it. Dagestan, for example, recently set up a commission for the rehabilitation of fighters that co-opts relatives in negotiating the surrender of boyeviki, who can then expect softened sentences for their crimes.

In Kabardino-Balkaria, Valery Khatazhukov, a well-known human rights advocate, is supporting a group of alleged militants’ parents who have asked for a meeting with the republic’s Kremlin-appointed president, Arsen Kanokov. “They want to see what they can do to help return their children and ensure they get a fair trial,” said Khatazhukov when I met him.

Kanokov has indicated he is ready to meet the group, but it already seems clear he holds little sympathy for hard-pressed relatives. “We need to work with parents and families,” he said on Feb. 1. “If they haven’t brought up their children right, let them also take responsibility. Someone is running around in the forest, while his relative works in a shop. That can’t go on; we will find measures for that.”

He added: “Of course, we’re not going to burn down houses in the places [fighters] were born, like they do in Chechnya…. But if [parents] have given birth to a monster, then they should answer for it, not the state.”

The president’s ill-judged comments were compounded when he said the violence in Kabardino-Balkaria has gotten so bad that groups of athletic young men should be armed to create anti-Islamist village militia units. (“Absurd idea,” Khatazhukov told me. “It’s the security services who should provide us security, not some amateur sportsmen with guns in their hands.”)

Now, vigilantes like the previously unheard of Black Hawks appear to be taking this task to hand. In the last few days, a fuzzy video has gone viral here, as young people across the republic pass it between cell phones. Titled “Address from the Black Hawks,” it features a man in a black balaclava and a military jacket clutching an automatic weapon and talking to the camera. “You have a 2 million [ruble] price on your heads,” says the man, apparently addressing local leaders of the Islamist guerrillas. “We don’t need the money; we’ll liquidate you for free.”

“Umarov betrayed his people — he delivers young people to the slaughter and then proclaims them martyrs,” he says. “Why is he himself not hurrying to the Gardens of Paradise? You, killers, Mamishev and Shameyev. Your time is running out. We are on your trail and the reprisal will be short.”

It is unclear yet how serious the Black Hawks are about their threats and whether they have the wherewithal to carry them out. But the very fact that such a group has announced itself poses the threat of a widening civil conflict, where neighbor attacks neighbor on the base of rumor and fear.

Marina Mamisheva says she is not sure how much more she can take. Since November, police have carried out five searches in her house. In December, Kantemir, a welder, was stopped on his way to work by police who — he claims — planted two clips of ammunition in his pockets and then arrested him for carrying them. (A judge found Kantemir not guilty this week.) Now there are the Black Hawks to contend with.

“All the time the pressure on my sons is growing,” said Marina. “What do these people want, that two more of my boys go to the forest?”

Tom Parfitt is a fellow of the London-based Royal Geographical Society and a former public policy scholar at the Woodrow Wilson International Center. His trip is supported by the Pulitzer Center on Crisis Reporting.
Tags: Economics, Religion, Russia, Terrorism

What Russia Really Wants in the Balkans