Revenge of the Quiet American

The world of U.S. diplomacy as filtered through WikiLeaks looks an awful lot like a certain other Western imperial power from not too long ago. 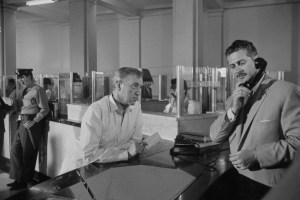 The making of WikiLeaks sounds like a plot straight out of Graham Greene, with some 21st-century updates: A disgruntled Army private downloads a digital grab bag of classified documents, burns them onto sham Lady Gaga CDs, and passes them into the hackosphere, where they are published by an international man of mystery. So perhaps it shouldn’t be so striking that reading the WikiLeaks archive, one gets an uncanny sensation of entering the Greeneland of Our Man in Havana or The Quiet American, in which social events merge with affairs of state, gossip is retailed as intelligence, and personality stands in for politics.

Greene wrote about the closing days of the British Empire, which began the 20th century formally encompassing a quarter of the world and informally dominating considerably more, but ended it having passed the superpower’s cape to the United States. Historians have debated the precise ways in which American hegemony today does and doesn’t resemble that of imperial Britain. But reading the leaked cables, there is no mistaking how much U.S. diplomats describe their milieux in terms similar to those of their British predecessors. In everything from literary style to subject matter, this accidental repository would not seem out of place among the records of the Foreign and Commonwealth Office, now neatly boxed away in the British National Archives. Like the dispatches of British diplomats in the age of empire, these cables sketch a world of international rivalry, full of thrusting ambition and the abundant eccentricities of things foreign.

Even if you can’t name the capital of Azerbaijan, now you know that its first lady has had so much plastic surgery that, while from a distance she is indistinguishable from her daughters, up close she is so distorted as to be “unable to show a full range of facial expression.” You may not be able to place Turkmenistan on a map, but you learn that its president, Gurbanguly Berdimuhamedov, is “vain, fastidious, vindictive, [and] a micro-manager” who had a military official fired for allowing a cat to run in front of his motorcade.

Such anecdotes — call it the lifestyles of the rich and infamous — stand out as the latest version of a long-standing imperial sport. British officials frequently pilloried foreign (usually nonwhite) leaders for their apparently fickle and corrupt behaviors, conspicuous consumption, and vulgar aping of Western ways. These criticisms often implied, by extension, those leaders’ unfitness to rule. It’s a kind of neo-Orientalism, a way of keeping the small-timers in their place, if not in some cases generating grounds to unseat them outright. The release of a cable revealing the lavish lifestyle of the Tunisian strongarm leader’s son-in-law, complete with a pet tiger that reminded the ambassador of “Uday Hussein’s lion cage in Baghdad” helped fuel anti-government rioting in Tunisia that eventually forced the president into exile.

There is another reason the cables abound in such vivid descriptions: They belong to a centuries-old literary genre, the diplomatic dispatch. Dispatches turn far-flung consuls into professional authors with a vested interest in making their writings stand out. One doesn’t normally think of bureaucrats lavishing attention on literary style, but what better way to get the bosses to notice them? The cables have real panache. How many journalists, even, would characterize the Russian presidential succession as a “feeding-frenzy among those who fear their snouts could soon be torn from the trough”?

Beneath all the colorful language, though, lurk suggestions of a darker parallel with the British Empire. About a century ago, Britain and other European powers engaged in the Scramble for Africa; it waged the Great Game with Russia for control of Central Asia; and it anxiously observed the rise of the United States and Germany as imperial powers. These cables show U.S. diplomats mirroring and echoing such suspicion, insecurity, and ego-gratifying one-upmanship. Ironically enough the British now figure in terms they themselves might have applied to the French: accused of “overreacting” in places, of being “unable to prioritize” in others, and of being “ham-strung by [their] colonial past.” During a brunch briefing with the U.S. ambassador in Kyrgyzstan, Prince Andrew, the Duke of York, revealed that he thinks the Great Game is still being played, “and this time we aim to win!”

That sounds comical enough, until one runs into analogous terms in two cables from our man in Baghdad describing the present “Great Game” in Iraq, where powers wrestle for place in a region calamitously unsettled by the U.S. invasion. In the 19th century, European empires competed for valuable resource and development concessions in Africa; now U.S. diplomats monitor Chinese investment in Angola, Cameroon, and Nigeria. British fleets once patrolled the seas for slave-traders and smugglers; now the U.S. company formerly known as Blackwater pursues for-profit pirate-hunting operations off the Horn of Africa. Britain pioneered transcontinental information-gathering networks; now the America of Google and Facebook worries about hackers based in Russia and China.

WikiLeaks hopes that revealing these documents will change the way its audience views American power. But the real novelty of WikiLeaks lies in the way the cables invite being read. Whereas Britons of Greene’s generation received news of the empire through the filter of roving foreign correspondents and Fleet Street newspapers, WikiLeaks allows anyone with an Internet connection to access the raw material of American diplomacy. To piece together all its eye-catching details into a meaningful narrative, however, takes more than a browser’s whim; it calls for the connective, contextualizing skills of historians. Without looking back into Greene’s world, we’ll never fully understand what is unique about our own.