The 9 most annoying sky-is-falling clichés in American foreign policy. 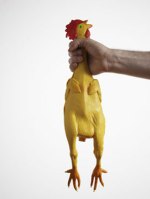 Why is it that fallacies in foreign policy are so endlessly repeated? Whether in the form of alarmist predictions that never seem to pan out or stale clichés that are constantly recycled no matter how discredited, the apocalypse — or utopia, for that matter — always seems just around the corner.

Can’t we just dispense with these ideas already? Perhaps we don’t because we prefer to imagine, as the old curse goes, that we “live in interesting times.” As for the pundits and prophets, well, nobody ever won an invitation to Davos or got a six-figure book deal by arguing that the world of 2050 will — in all probability — look pretty much like that of today. So, in a spirit of curmudgeonly exasperation, here is my personal list of the most infuriating failed predictions, perennial fallacies, and doomed proposals that never seem to go away, from nuclear apocalypse to bird flu.

Tom Clancy predicted this exact scenario in his 1991 potboiler The Sum of All Fears — and it remains a perennial of public discussion. In his 2004 book Nuclear Terrorism, Harvard University’s Graham Allison stated that there was at least a 50 percent likelihood of a nuclear bomb being detonated in an American city in the next decade. In 2006, his colleague Matthew Bunn created a mathematical model predicting a 29 percent probability of a nuclear attack in the next 10 years. Several times each month, Allison and Bunn are still publicly cited as experts warning of this alleged imminent threat.

The fact that it hasn’t happened yet certainly hasn’t stopped U.S. security officials and political leaders from relying on the specious precision provided by estimated probabilities of a nuclear holocaust. Such fears are easily manipulated for political purposes — see George W. Bush’s administration invoking “the smoking gun … in the form of a mushroom cloud” to justify the invasion of Iraq — and even President Barack Obama has now bought in, calling nuclear terrorism the “biggest threat” facing the United States today. So? No question U.S. intelligence agencies should be watchful. But first lady Michelle Obama has also called childhood obesity a “national security threat.” Now, if portly teenage domestic terrorists got their hands on a loose nuke, that really might be the sum of all fears.

2. The world must adapt quickly to the end of fossil fuels.

This false prediction has been around since at least 1865, when British economist William Stanley Jevons published The Coal Question: An Inquiry Concerning the Progress of the Nation, and the Probable Exhaustion of Our Coal-Mines. Britain’s coal has indeed been depleted, but a century and a half later, there are still hundreds of years worth of coal yet untapped worldwide. The similarly menacing date for “peak oil,” the point at which more than half the world’s petroleum supplies will have been exhausted and begin a long decline, has also repeatedly been pushed forward into the future by the advent of new technologies. For instance, thanks to innovative ways to tap into previously inaccessible or prohibitively expensive sources, natural gas will soon be available in much larger amounts than anyone imagined only a few years ago.

It’s one thing for reformed oilman T. Boone Pickens or former CIA Director R. James Woolsey to argue that industrial societies should end their reliance on fossil fuels in order to reduce their dependence on hostile petrostates or combat global warming. But it’s quite another to claim that such a massive shift is necessary because we’re about to run out of the stuff.

Robert Kagan’s 2003 book Of Paradise and Power crystallized this cliché: Americans are from Mars; Europeans are from Venus. In February 2010, U.S. Defense Secretary Robert Gates turned up the volume: “The demilitarization of Europe … has gone from a blessing in the 20th century to an impediment to achieving real security and lasting peace in the 21st.”

Yet the defense spending of major European powers hardly proves them to be doves. As a share of GDP, European military budgets have been roughly even with those of the BRIC countries that are supposed to be the great powers of the future. What really irks Americans who criticize Europe’s alleged pacifism has been opposition to the Iraq war or refusal to make greater commitments for the war in Afghanistan. In reality, Europeans are no pacifists; they’ve simply declined the invitation to play Robin to America’s global Batman. European countries spend quite enough to defend themselves — against real threats.

4. The rain forests are about to disappear.

This is yet another case of exaggeration in defense of a good cause. Remember the 1980s, when it seemed the Amazon rain forest wasn’t long for this world — and that humanity was threatened as atmospheric oxygen levels correspondingly declined? The World Wildlife Fund’s Thomas Lovejoy in 1980 predicted 50 percent deforestation in Latin America by 2000. And Al Gore famously claimed in Earth in the Balance that rain forests “are disappearing from the face of the earth at the rate of one and a half acres a second, night and day, every day, all year round.”

But as the New York Times reported in 2009, “new ‘secondary’ forests are emerging in Latin America, Asia and other tropical regions at such a fast pace that the trend has set off a serious debate about whether saving primeval rain forest — an iconic environmental cause — may be less urgent than once thought.” For every acre of rain forest chopped down annually, more than 50 acres are growing back on previously ravaged tropical land, according to one estimate. Meanwhile, thanks to advanced agricultural technology that permits more food to be grown on fewer acres, Northern Hemisphere countries like the United States, Canada, and the nations of Europe are being regreened rapidly, as former farmland returns to forest.

There’s nothing like a good plague to get journalists and pundits in a frenzy. Although the threat of global pandemics is real, it’s all too often exaggerated. In the last few years, the world has experienced two such pandemics, the avian flu (H5N1) and swine flu (H1N1). Both fell far short of the apocalyptic vision of a new Black Death cutting huge swaths of mortality with its remorseless scythe. Out of a global population of more than 6 billion people, 8,768 are estimated to have died from swine flu, 306 from avian flu.

And yet it was not just the BBC ominously informing us that “the deadly swine flu … cannot be contained.” Like warnings about the proliferation of nuclear weapons, the good done by mobilizing people to address the problem must be weighed against the danger of apocalypse fatigue on the part of a public subjected to endless Chicken Little scares.

At least the space race had a military rationale. If there’s any doubt remaining that this is an idea past its sell-by date, look no further than Obama’s decision to dust off Jimmy Carter-era high-speed rail maps for his new high-speed rail plan in 2009. The justification? Japan, “the nation that unveiled the first high-speed rail system, is already at work building the next.” But a new generation of bullet trains connecting Tokyo to Osaka hasn’t done a thing to help the Japanese economy recover from a lost decade — and it won’t save the U.S. economy either.

Not only does the United States already have first-rate highways, but it leads the world in freight rail, which at $265 billion a year is far more important to the economy than pouring hundreds of billions into bullet trains for affluent Americans. Unfortunately, freight trains and other more rational projects, like improved inland waterways, truck-only highways, and computerized “smart” roads, just don’t capture the imagination. And now that conservatives have learned that they can infuriate progressives by promising to cancel high-speed rail projects, American supertrains may end up as they are now: the perpetual transportation mode of the future.

7. Climate change will cause mass migration.

To the canon of modern apocalyptic scenarios, add this: millions upon millions of refugees streaming across borders pursued by rising sea levels or encroaching deserts. The Environmental Justice Foundation predicts that 150 million people could lose their homes as a result of global warming by 2050. And the NGO Christian Aid predicts that “1 billion people will be forced from their homes between now and 2050.”

Hold on a second. According to the same source, out of this 1 billion, 250 million — the vast majority of whom will remain in their own countries — could be “permanently displaced by climate change-related phenomena such as floods, droughts, famines and hurricanes” and 645 million “by development projects such as dams and mines.” And this won’t happen in 40 days and nights; governments have 40 years to adjust. In other words, not quite the hordes of homeless, stateless refugees fleeing runaway climate change that the sensationalist headlines evoke.

8. Water-sharing can bring peace to the Middle East.

Call it the two-state, one-river solution. The idea that water-sharing projects can reduce tensions between hostile neighbors has a long — if not very encouraging — history. During the Vietnam War, U.S. President Lyndon Johnson suggested North and South Vietnam should set aside their differences and collaborate to bring hydropower to the Mekong River delta. The proposal fell on deaf ears, as has the frequently repeated notion that somehow water-sharing could bring peace to the Middle East. In the 1990s, U.N. Secretary-General Boutros Boutros-Ghali warned repeatedly that the next war in the Middle East would be over water, not politics.

He was wrong. And though UNESCO and other international organizations have taken up the torch, holding such conferences as “Water: A Catalyst for Peace,” the key conflicts remain, as always, about territory, demography, ideology, and relative power. Water-sharing agreements are the effect of peace, not its cause.

9. The nation-state is dead.

In the 1990s, gurus like Japan’s Kenichi Ohmae predicted that the nation-state would be replaced by supranational regional systems like the European Union. Well, the EU’s not looking so hot right now. Today, it’s the city-state that’s being touted as the successor to the nation-state. “The 21st century will not be dominated by America or China, Brazil or India, but by the city,” Parag Khanna wrote recently in Foreign Policy. Or, as John Perry Barlow of the Electronic Frontier Foundation predicted last year: “We’re going back to the city-state.” It’s not often that an eminent foreign-policy analyst (Khanna) and a former Grateful Dead lyricist (Barlow) agree, so maybe there is something to this idea.

Or maybe not. When al Qaeda attacked New York, did the NYPD invade Afghanistan? And who bailed out London’s banks when threatened with collapse in 2008? Again and again, when “global” financial and corporate enterprises have been threatened, good, old-fashioned nation-states have come to the rescue. As they surely will again, when the apocalypse finally hits.

Michael Lind is a visiting professor at the Lyndon B. Johnson School of Public Affairs at the University of Texas at Austin and co-author with Robert D. Atkinson of "Big is Beautiful: Debunking the Myth of Small Business."
View
Comments
Tags: 185, Default, Free, In Box, Opening Gambit, U.S. Foreign Policy