The Future of War

What wars are we going to be fighting in the next decade -- and with what weapons?

Expert and popular opinions often don’t intersect. And that has become particularly true in a political era characterized by a dislike for Washington, distrust of elite opinion, and the ascendency of Tea Party populism. While elite opinions about U.S. military and national-security affairs are in tune with those of the broader American public in some areas, such as President Barack Obama’s handling of China, they diverge wildly in others, such as the threat posed by a nuclear Iran and defense spending. At least some of this divergence may come from the simple fact that Americans’ top concerns these days relate to the economy — not defense issues.

FP‘s experts and the public see eye to eye when it comes to Obama’s performance as commander in chief. Experts rate the president, on average, at 5.2 (on a scale of 1 to 10) as a wartime leader — a tepid but not negative assessment. Similarly, a July 2010 Washington Post/ABC Poll found that 55 percent of Americans approved of Obama’s performance as commander in chief of the military. These marks fall within the range of the margin of error for Obama’s overall approval ratings in the same poll, suggesting that he is perceived of as a similarly adequate president on domestic and foreign policy. 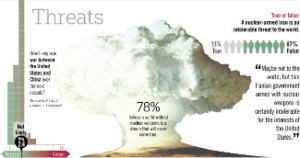 Read this Slide Show for the full survey results.

There is also shared skepticism of Obama’s signature national-security initiative. FP‘s experts overwhelmingly (78 percent) believe that the president’s vision of a “world without nuclear weapons” will be impossible in practice. Concordantly, in an April 2010 CNN poll, 74 percent of all respondents disagreed with the statement that “the total elimination of all nuclear weapons is possible.” This pessimism is striking, given that decades of public opinion polling have shown that roughly seven out of 10 people consistently favor the eventual abolition of nuclear weapons, including America’s.

FP‘s experts assess the probability of a U.S.-China war in the next decade to be low (2.4 on the 1 to 10 scale). Comparable polling for non-experts is lacking, yet a September 2010 Chicago Council on Global Affairs poll found only 17 percent of Americans “very worried” that China will become a future military threat to the United States. And for all the passionate debate on newspaper op-ed pages and security journals, a January 2011 Pew Research Center for the People and the Press poll found that only 22 percent of Americans view China as an adversary.

The experts’ assessments were not entirely harmonious with popular views, however. In three areas, the wonks and the hoi polloi diverge markedly.

First, there’s discord over the threat posed by Iran. FP‘s experts largely (67 percent) believe that a nuclear Iran is a tolerable threat to the world. And while identical data is not available, in a November 2009 Pew Global Attitudes poll, 82 percent of Americans said that a nuclear-armed Iran would be a “major threat” to the United States. Puzzlingly, a full 71 percent of Americans think Iran already possesses a nuclear arsenal, according to a February 2010 CNN/Opinion Research Corporation poll. Perhaps this misconception about Iran’s capabilities explains the divergent opinions. Or Americans overall may put less faith in the deterrent effect of U.S. or Israeli conventional and nuclear forces to deter Iranian assault.

FP‘s experts also almost uniformly (96 percent) agree that the United States has the world’s best military. Compare that result to that of a Gallup Poll, conducted every year from 1993 through 2010, which asked the American public if “the United States is number one in the world militarily.” Responses have varied from 51 to 64 percent in agreement. A similar January 2011 Pew Research Center for the People and the Press poll showed that only 67 percent of respondents thought America was “the world’s leading military power.” While America’s costly and inconclusive conflicts in Iraq and Afghanistan can explain recent doubts about the U.S. military, it is remarkable that this opinion gap has existed since the pre-Sept. 11 era. Perhaps Americans inherently question U.S. military power, or simply overinflate the military capabilities of other countries.

A plurality of FP‘s experts called for total defense budget cuts of 8 to 15 percent (or between $45 billion and $85 billion) over the next decade. Meanwhile, in a February 2011 Program for Public Consultation poll that averaged American’s responses of which programs to cut among 31 different programs, respondents sought to drastically slash Pentagon spending by 20 percent ($110 billion) in just one year — that’s one to two dozen times larger than the majority of the experts’ would recommend. (The next three programs that poll respondents targeted for cuts were also all defense related: intelligence agencies, spending for the wars in Iraq and Afghanistan, and veterans affairs.) Clearly, Americans believe that too many taxpayer dollars are dedicated to funding the national security system. This observation will not be lost on politicians as they target programs to cut to tackle the crippling $3.5 trillion in deficits the United States faces over the next decade.

With Sept. 11 receding in the public consciousness and unemployment rates still bearing down, roughly 60 percent of Americans now oppose the wars in Iraq and Afghanistan, and defense issues are simply not that important for the vast majority of voters. A January 2011 Gallup Poll found that more than two out of three Americans named economic-related issues as the country’s most important problems. The top three non-economic issues came in as health care, dissatisfaction with government, and immigration. National security didn’t make the ranking. Paradoxically, however, that may open a window for politicians to listen to expert opinion, since defense issues don’t carry the same electoral weight that they used to.

See the rest of the survey results here.

Micah Zenko is a fellow in the Center for Preventive Action at the Council on Foreign Relations.

NEW FOR SUBSCRIBERS: Want to read more on this topic or region? Click + to receive email alerts when new stories are published on Military, Economics