Following a call for peaceful protests in China, Beijing is arresting and disappearing activists in perhaps the most exhaustive crackdown in recent memory. Here are their stories. 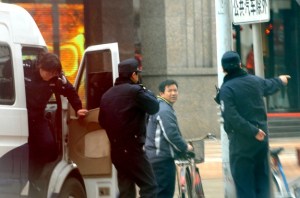 Shortly after Egyptian president Hosni Mubarak was forced to step down, an anonymous call began to circulate through Chinese microblogs for citizens to participate in “Jasmine Revolution” protests. The demonstrations, which took place on Feb. 20 and Feb. 27 in several large Chinese cities, attracted a small but determined cohort of Chinese people “taking a walk” and “gathering to watch” as a peaceful show of support for pro-democracy movements in the Middle East — and for expanding employment opportunities, protecting housing rights, and opposing official corruption in China. President Hu Jintao labeled the call for protests “socially destabilizing,” and Chinese authorities responded with a sweeping pre-emptive strike against anyone they identified as likely to take part. That included hundreds of human rights activists, lawyers, and pro-democracy dissidents from across the country. Police used violence, arbitrary detention, “disappearances,” and other forms of harassment and intimidation to silence their voices. Although the full scope of police action is difficult to trace, signs are emerging that the ongoing crackdown may be one of the severest in the past few years.

In the last two weeks, in several cities, police have criminally detained at least six activists for “endangering state security” and at least five others without formal charges. Police have raided the residences of at least ten individuals, confiscating laptops, computers, cell phones, and books. More than 100 individuals told my organization, Chinese Human Rights Defenders (CHRD), that they had been questioned, threatened, put under house arrest, or forced to go on police-escorted “tourism” outings in recent days. Additionally, one activist was detained in a mental hospital in Anhui, and one lawyer was severely beaten by unidentified men on his way to a demonstration in Guangzhou.

What follows is a partial list of Chinese activists swept up in the ongoing crackdown.

The whereabouts of several Chinese activists — last seen being hauled off by police — remain unknown. None have been formally charged. Past experiences indicate that the longer activists are held by police without charges, the greater the likelihood that they may be subjected to torture to extract “confessions.”

1) Tang Jitian, a human rights lawyer, was taken away by police on the evening of Feb. 16. He had just eaten lunch with a dozen other activists who were discussing how to provide assistance to the blind activist Chen Guangcheng, now under house arrest in Shandong province. Tang’s residence was searched.

2) Jiang Tianyong, a human rights lawyer, was taken from his brother’s home on Feb. 19 and driven away by men identified by his family as Beijing police officers. That evening, police searched his apartment and confiscated his computer.

4) On Feb. 19, two dozen policemen searched the home of Gu Chuan, a Beijing writer and activist, and then took Gu away to an unknown location. The police confiscated two computers, two cell phones, and some books. His wife, Li Xinai, also an activist, has been placed under house arrest.

5) On the morning of Feb. 25, democracy and human rights activist Li Hai was taken from his home in the Beijing suburbs by local police. He returned home late that evening, but was warned not to leave his home again, go online, or attempt to contact anyone. On Feb. 26, Li sent a text message to friends alerting them that he was being guarded by three men; if he turned his cell phone off, he warned, it meant that there was trouble. Shortly after 3 p.m., his phone went dead. He has not been heard from since.

Within the past several days, several activists across China have been detained for “endangering state security.” Those convicted on similar charges in recent years have faced prison sentences of a decade or longer.

1) Ran Yunfei, 46, a writer, blogger, and activist, was detained for “subversion of state power” on Feb. 24. Ran is a member of the ethnic Tu minority who lives in the city of Chengdu in western Sichuan province; he writes for the magazine Sichuan Literature and tweets frequently. His Twitter account has more than 44,000 followers. Police also searched his home and confiscated his computer.

2) Hua Chunhui, 47, is a cyberactivist and midlevel manager at an insurance company in eastern Jiangsu province. He was seized by police on Feb. 21 and detained on suspicion of “endangering state security.” Hua, using the Twitter account @wxhch64, has tweeted messages about the “Jasmine Revolution.” Hua and his fiancée Wang Yi have been active in civil society initiatives in recent years.

3) Liang Haiyi was taken in for questioning on Feb. 19 by police in Harbin City, Heilongjiang province. According to Liang Xiaojun, a lawyer retained by her family, Liang was detained on suspicion of “subversion of state power.” Police accused her of “posting information from foreign websites regarding ‘Jasmine Revolution’ actions on domestic websites” such as QQ, the popular Chinese social networking site.

4) Ding Mao, 45, was seized on Feb. 19 and detained in Sichuan province on suspicion of “inciting subversion of state power.” As a philosophy student at Lanzhou University, Ding became a student leader during the 1989 pro-democracy protests. He was twice imprisoned for his activism, first in 1989 and again in 1992. He has spent a total of 10 years in prison, and is currently the general manager of an investment company.

5) Chen Wei, a 42-year-old human rights activist based in Sichuan, was criminally detained for “inciting subversion of state power” on Feb. 21. Police later searched his home, confiscating a computer, two hard drives, and a USB drive. He is currently being held at the Suining City Detention Center.

These are just some examples among the many more reports of similar incidents that have recently circulated online. (I have only included examples that CHRD was able to independently verify.)

In recent days, there have been other instances of prominent lawyers and activists subjected to prolonged disappearances, criminal charges that may carry lengthy prison sentences, more and home raids. There appears to be a heavier reliance on extralegal measures than we have seen around other recent high-anxiety moments — such as the release of the reformist manifesto Charter 08 or the 2010 Nobel Peace Prize ceremony. That is an ominous sign.

The fact that China has not yet seen mass popular uprisings like those in Tunisia, Egypt, or Libya is no sure sign of contentedness among the Chinese people. Rather, the government’s swift reaction to nip the “Jasmine Revolution” protests in the bud reveals the extent to which it fears its own people. One thing is clear: Compared with its counterparts in the Middle East, China’s authoritarian government holds a much tighter and more sophisticated grip on political dissent.