The fashion industry's faux pas on global issues would be funny, if they weren't so tragically inept. 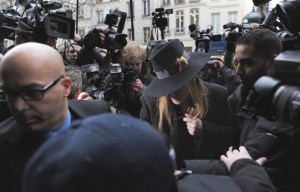 Who: John Galliano
What: Hitler rant

Recently suspended fired Christian Dior Creative Director John Galliano was already well known outside couture circles for the real-life inspiration he gave to Mugatu, the evil designer character in the fashion sendup comedy Zoolander — one real-life Galliano spring collection featured dresses made from newspaper, supposedly modeled on Paris’s homeless. But his public image took a less sporting hit this week when he was caught on camera at a restaurant accosting a pair of fellow diners with statements like “I love Hitler” and “People like you would be dead. Your mothers, your forefathers, would all be f****** gassed.” The late-night drinking session led to his arrest and eventual suspension ahead of Paris Fashion Week.

(Update: After the initial suspension, Galliano was officially fired from his position at Dior on March 1. Sidney Toledano, the president and CEO of Dior, issued a brief statement: “I condemn most firmly the statements made by John Galliano which are a total contradiction with the essential values that have always been defended by the House of Christian Dior.”) 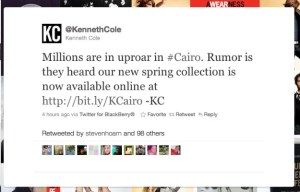 When designer Kenneth Cole tried to use the unfolding revolution in Egypt for a bit of guerrilla self-promotion on Twitter (“Millions are in uproar in #Cairo. Rumor is they heard our new spring collection is now available online”), the social media backlash was immediate. Cole quickly took his ill-advised Tweet down and issued an apology, but the incident earned him a fake Twitter handle: an imposter called @KennethColePR wasted no time in cheerfully skewering the fashion icon.

While Cole has been praised as one of the more globally conscious fashion elites, his propensity for this kind of thing has gotten him in trouble before. After 9/11, he told New York’s Daily News, “Important moments like this are a time to reflect…To remind us, sometimes, that it’s not only important what you wear, but it’s also important to be aware.”

Who: Vogue magazine
What: A fawning profile of a dictator’s wife; blackface; oil spill gaffe

If you thought that geopolitical and humanitarian faux pas in the fashion business were limited to designers themselves, you obviously haven’t seen the new issue of Vogue. The magazine caused a stir last week when it published a fawning profile of Syria’s first lady, written by the magazine’s former French editor (and photographed, bizarrely, by James Nachtwey, a celebrated war photographer whose attention to human suffering has been the subject of a documentary and a hefty art book). The piece called Asma Assad a “rose in the desert” whose home “is known as the safest country in the Middle East” — which is true enough, as long as you don’t mind the human rights abuses, arming of Hezbollah, and role in the assassination of Lebanon’s elected leader.

The article was also spectacularly ill-timed, appearing just as pro-democracy uprisings were roiling the illiberal autocracies of the Arab world, including a smattering of protests in Syria itself.

But Vogue‘s blunder in the Middle East isn’t exactly a surprise — the magazine has made a veritable pastime of stumbling into controversy. In 2009, French Vogue thought it would be a good idea to put its models in blackface. And, when oil from the Deepwater Horizon disaster was choking the Gulf of Mexico last summer, a spread in the August issue of the magazine’s Italian edition offered an homage to BP called “Water and Oil,” featuring a waifish model posing as a tortured, oil-slick creature reminiscent of a petroleum-soaked pelican. According to Italian Vogue Editor in Chief Franca Sozzani, the portfolio wasn’t meant to cause offense. “The message is to be careful about nature,” she told the Associated Press. “Just to take care more about nature…I understand that it could be shocking to see and look in this way these images.” 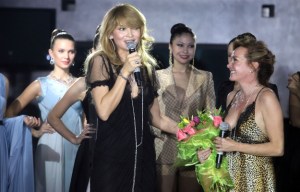 Who: Gulnara Karimova
What: Dictator chic

Uzbekistan is among the world’s most notorious authoritarian pariah states, a country widely censured for torture, forced labor, repression of political opposition, and sundry other abuses of human rights. But you wouldn’t know it from the reception that Gulnara Karimova, daughter of Uzbek strongman Islam Karimov, got at New York’s Fashion Week last year. Karimova — who is both Uzbekistan’s permanent representative to the United Nations and the country’s preeminent fashion designer — debuted her “Guli” line of “Uzbek-inflected fashion” at the annual event in New York last fall, featuring fabrics and designs that recalled traditional Uzbek apparel. She has taken her ensembles worldwide, telling reporters, “We’ve been showing in Milan and we had a lot of interest in Europe.”

Karimova might have to put her runway work on hold at some point, however; she is considered a leading candidate to succeed her father on the grimmer end of the family business — a succession that would give new meaning to being groomed for the throne. 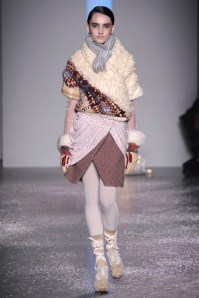 Ever since United Colors of Benetton waded into sensitive international issues like South African apartheid in the mid-1980s, the fashion world has looked toward geopolitical and humanitarian hot spots to add frisson to their campaigns — and it’s almost never been a good idea. Case in point: the fall/winter 2010 collection from fashion house Rodarte and cosmetics company MAC. Rodarte honchos Kate and Laura Mulleavy, who are known for their edgy couture (including work on the costume design for the film Black Swan) said the cosmetics collection was inspired by Ciudad Juárez, the Mexican border town infamous for brutal drug violence and maquiladoras whose employees are often the targets of violence themselves.

Sweatshops are dicey subjects for a fashion house to take up under any circumstances; but the Mulleavy sisters didn’t help things with the makeup itself — which pretty much looked like blood — or the models, which one fashion writer described as wearing “ethereal, unraveling, rather beautiful white dresses that alternately called to mind quinceañera parties, corpse brides, and, if you wanted to look at it through a really dark prism, the ghosts of the victims of Juárez’s drug wars.” After the collection attracted controversy, MAC and Rodarte dug themselves in a deeper hole with a series of oblivious press releases — before finally giving up and announcing they were donating 100 percent of the profits from the makeup line to Juárez-related charities. 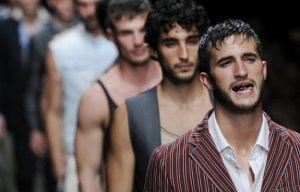 Who: Vivienne Westwood
What: Gypsy garb

British designer Vivienne Westwood considers herself a political activist as well as fashion entrepreneur — in 1989, she posed as Margaret Thatcher on the cover of the Tatler magazine, a move that reportedly infuriated the then-prime minister. In 2005, she designed T-shirts to protest Britain’s “draconian” anti-terrorism laws that read “I’m not a terrorist, please don’t arrest me” — and were modeled by babies.

But as a character in This Is Spinal Tap once observed, there’s a fine line between clever and stupid in this sort of thing — and Westwood crossed it in 2008, when she used Romas as catwalk models for a “tolerance” themed show in Milan, outfitting them with stereotypical “gypsy” accessories like gold teeth, tattoos, nipple piercings, and huge medallions. The show which featured her spring/summer 2009 menswear line, built on her perception of Roma as “rough, stylish and hardened outcasts of society.” New York Times fashion critic Jessica Michault was effusive in her praise for Westwood, calling the collection a “fierce caravan.” The Roma, of course, have faced persecution in Europe, particularly in France, from which they were deported last year.

In 2010, Westwood took her sartorial evocations a step further, designing (yet another) Mugatu-esque “homeless chic” line. The Milan Fashion Week press release for the collection declared: “Perhaps the oddest of heroes to emerge this season, Vivienne Westwood found inspiration in the roving vagrant whose daily get-up is a battle gear for the harsh weather conditions.” Charming.

Who: L’Oréal
What: Scent of a Nazi

Plenty of European companies emerged from World War II with inconvenient histories — just ask Mercedes-Benz — but the French cosmetics giant L’Oréal had more to answer for than most. Eugène Schueller, L’Oreal’s founder, who had allegedly provided meeting space to a fascist organization in Paris in the 1930s, became an enthusiastic supporter of Nazi-allied French political groups in occupied Paris in 1940. In speeches during the war, he railed against the threats posed by “Freemasonry and Jewry,” and declared, “I believe in an authoritarian state, properly led.” What was bad for the Jews was good for business — L’Oréal’s profits increased fourfold over the course of the war.

L’Oréal’s unsavory past eventually caught up with it in 2005, in the form of a $30 million lawsuit over a Paris property that had been used as the company’s headquarters after it was stolen from a Jewish family by the Nazis. Schueller’s daughter, Liliane Bettencourt, now the company’s principal shareholder, has been left to defend her father’s legacy. But L’Oréal was hardly alone; in 2004, author Stephanie Bonvicini discovered that the luxury goods designer Louis Vuitton had enjoyed a cozy relationship with the collaborationist Vichy regime during the same period.

Want to Counter Authoritarianism in Central America? Follow the Money.

Want to Counter Authoritarianism in Central America? Follow the Money.