As everyone knows, celebrity anti-Semitic rants come in threes. So it may come as no surprise that WikiLeaks founder Julian Assange is being accused of joining the ranks of Galliano and Sheen. Ian Hislop, editor of the British magazine Private Eye, has published his recollection of a phone conversation with Assange, following his publication of ... 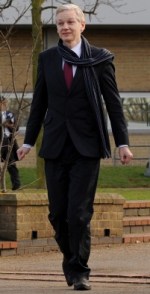 As everyone knows, celebrity anti-Semitic rants come in threes. So it may come as no surprise that WikiLeaks founder Julian Assange is being accused of joining the ranks of Galliano and Sheen.

Ian Hislop, editor of the British magazine Private Eye, has published his recollection of a phone conversation with Assange, following his publication of a piece on WikiLeaks associate and Holocaust denier Israel Shamir:

On the afternoon of Wednesday 16 February I had a phone call from Julian Assange, He tole me that teh piece I had publishedin that week’s issue (“Man in the Eye: Israel Shamir”, 1282) was “crap”. I asked him in what way it was crap but he could not tell me because, he said, “I haven’t read it”.

This was not a promising start. When I summarised the piece for his benefit — it was about a Wikileaks associate in Russia with a record of anti-semitism — he said that I and Private Eye should be ashamed of ourselves for joining in the international conspiracy to smear Wikileaks. The piece was an obvious attempt to deprive him and his organisation of Jewish support and donations, he said angrily, and he knew perfectly well who had written it. Hen then named a Fleet Street hack who had nothing to do with it. Wikileaks’ omniscience is clearly not yet complete.

Unabashed by this error, he went on to say that we were part of a conspiracy led by the Guardian which included journalist David Leigh, editor Alan Rusbridger and John Kampfner from Index on Censorhip — all of whom “are Jewish”.

I pointed out that Rusbridger is not actually Jewish, but Assange insisted that he was “sort of Jewish” because he was related to David Leigh (they are brothers-in-law). When I doubted whether his Jewish conspiracy would stand up against the fact, Assange suddenly conceded the point. “Forget the Jewish thing.”

According to the piece, Assange went on to comments bordering on sexism and homophobia, saying that Guardian journalists had “failed my masculinity test.” (Check out Mother Jones’ hilarious “Assange Masculinity Test”.)

WikiLeaks has responded to the piece with a very extended tweet, noting that the organization has “some Jewish staff and enjoys wide spread Jewish support” and has itself been accused of working on behalf of the Mossad and George Soros. Here’s Assange’s reply to Hislop:

“Hislop has distorted, invented or misremembered almost every significant claim and phrase. In particular, ‘Jewish conspiracy’ is completely false, in spirit and in word. It is serious and upsetting. Rather than correct a smear, Mr. Hislop has attempted, perhaps not surprisingly, to justify one smear with another in the same direction. That he has a reputation for this, and is famed to have received more libel suits in the UK than any other journalist as a result, does not mean that it is right. WikiLeaks promotes the ideal of “scientific journalism” – where the underlaying evidence of all articles is available to the reader precisely inorder to avoid these type of distortions. We treasure our strong Jewish support and staff, just as we treasure the support from pan-Arab democracy activists and others who share our hope for a just world.”

Of course, this is a case of one publicity-hungry media entity’s word against another. Hislop doesn’t help his credibility much by admitting that his article consists of “as much as I could remember of our conversation.” If you’re going to put someone’s remarks between quotation marks to paint them as an anti-Semite, you’d better have a recording or at least have been taking copious notes. On the other hand, only one of these guys has tried to trademark his own name this week, so you can decide for yourself which one is more credible.

How Russia Is Prodding Scotland Toward Independence

If Iowa Were in Africa, International Observers Would Be Crying Foul

The Oslo Accords Are Dead. Should the Palestinian Authority Live On?