In each of my three conversations with Col. Muammar al-Qaddafi throughout the 1990s, one theme prevailed: the Libyan leader's contempt for my country. Listening to his verbose condemnation of Italian colonialism was the price I paid to ask my own questions -- no matter the supposed topic of the interview. In one encounter, in the middle of the night under a tent in the Sirte desert, he bemoaned Libya's exploitation at Italian hands; at noon near the sand dunes just outside Tripoli, he blamed his country's troubles on Rome. Now, with his regime on edge, he is again blaming outsiders for Libya's ills. The protests, he said in a Feb. 22 address, were sparked by malevolent foreigners who were giving the demonstrators drugs. He accused the Italians -- along with the Americans -- of having delivered shoulder-launched rocket-propelled grenades to the rebel forces. 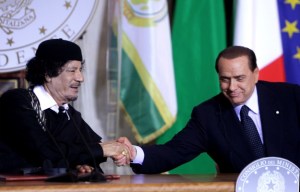 In each of my three conversations with Col. Muammar al-Qaddafi throughout the 1990s, one theme prevailed: the Libyan leader’s contempt for my country. Listening to his verbose condemnation of Italian colonialism was the price I paid to ask my own questions — no matter the supposed topic of the interview. In one encounter, in the middle of the night under a tent in the Sirte desert, he bemoaned Libya’s exploitation at Italian hands; at noon near the sand dunes just outside Tripoli, he blamed his country’s troubles on Rome. Now, with his regime on edge, he is again blaming outsiders for Libya’s ills. The protests, he said in a Feb. 22 address, were sparked by malevolent foreigners who were giving the demonstrators drugs. He accused the Italians — along with the Americans — of having delivered shoulder-launched rocket-propelled grenades to the rebel forces.

Given all this, you might find it odd — as I still do — that Qaddafi’s closest European ally is, or was until very recently, none other than the Italian government. During his four decades of rule, the colonel managed to convince Italian leaders not only that their country owed Libya a historical debt, but that Rome couldn’t do without Tripoli’s help on everything from terrorism to immigration to oil. He extracted huge concessions from Rome and won huge economic windfalls for cronies including Farhat Bengdara, governor of the Central Bank of Libya, who became vice chairman of UniCredit, the biggest Italian bank, in 2009. Perhaps most significantly, he convinced Italy to be an evangelist for Libya’s reintegration into the world community. The result is an absurdly asymmetrical relationship between the two countries; Qaddafi was always the winner.

At the beginning of his rule in 1969, Qaddafi’s beef with Italy may have been justified. Like Britain and France elsewhere in Africa, Italy had occupied the country, sometimes brutally, beginning in 1911. After World War I, 30,000 Italian settlers were given farmland, taken away from local cultivators. When Benito Mussolini came to power in Italy, he ordered his forces to crush the fledgling Libyan resistance using any and all means. Untold numbers were killed, forced to migrate, or shoved into concentration camps. It wasn’t until after World War II that Libya became independent again.

Libya was reborn in 1951 as a monarchy under King Idris, who was overthrown by the coup d’état that brought Qaddafi to power. A disciple of the anti-colonialism preached by Egyptian leader Gamal Abdel Nasser, Qaddafi found in Italy the perfect enemy. In 1970, less than a year after coming to power, he expelled every Italian living in the country — more than 20,000 people — and seized all their assets.

Qaddafi’s hatred for Italy escalated into distaste for the entire West. He became a seemingly indiscriminate supporter of anti-Western militancy and terrorism. He funded and trained the Red Army Faction, the Red Brigades, and the Irish Republican Army. He also carried out his own attacks against targets such as Berlin’s La Belle nightclub in 1986 and the Pan Am Flight 103 jumbo jet that exploded over Lockerbie, Scotland, in 1988, killing 270 people.

Yet throughout this period, Italy-Libya relations remained solid — even after the colonel dubbed a 1985 terrorist attack against the Rome airport that took the lives of 13 people a “heroic act,” after he shot a Scud missile at the Italian island of Lampedusa as revenge for the U.S. bombing of Tripoli in 1986, and after he offered refuge in 1989 to Abdel Osama al-Zomar, the Palestinian terrorist sentenced to life for having been part of the 1982 attack against the Great Synagogue of Rome.

Yes, through it all, Italy found a way to work with Qaddafi. Its energy giant, Eni, began operating in Libya in 1956. Today the country supplies Italy with 22 percent of its oil and 10 percent of its gas — some 28 percent of Libya’s total exports. In 1998, Rome and Tripoli signed an agreement that committed Italy to paying reparations for colonialism, without any stipulations that Libya compensate Italians for the properties it seized in 1970. Then, beginning in 2000, Romano Prodi, then pre­si­dent of the European Commission, pus­hed Eu­ro­pe to re­start trade re­la­tions with Tri­po­li, which was under U.N. sanctions because of the Pan Am bombing. In 2004, he succeeded. Prodi received Qaddafi at the European Commission building in Brussels that April in the leader’s first visit to Europe after 15 years.

It has always been clear who is in charge of the Italy-Libya relationship: The mo­re Qaddafi insulted I­ta­ly, the mo­re concessions he won from Ro­me. The colonel never wanted to build on the two countries’ common past. What he was after was more tangible: hu­ge I­ta­lian in­vest­ments in Libyan in­fra­struc­tu­re pro­jects and permission to invest in the big­gest I­ta­lian bank as well as in many strategic pri­va­te com­pa­nies. This is to say nothing of oil, which Italian firms pump to the tune of 89 million barrels a year, decade after decade — including during a U.N. trade embargo. Eni was the only major Western oil company to remain in the country — a choice that was rewarded in 2007 when Eni entered into a giant, 10-year, $28 billion deal with Libya, which agreed to extend existing oil supply contracts through 2042 and natural gas ones through 2047. (Qaddafi allegedly received a significant cut of those sales’ profit.)

How did Qaddafi so completely seduce Rome?

First, he used historical blackmail. Qaddafi played with the memory of the co­lo­nial past and the crimes com­mit­ted by the Fa­scist regime against the Libyan population to ask for ne­ver-en­ding reparations. He has asked for compensation for every conceivable piece of the past — from minefields to ill health suffered by Libyan civilians. The aim was never to improve his people’s welfare, but rather to gain ever more leverage and bargaining power with Rome.

Second, Qaddafi u­sed his country’s oil and gas wealth — and Italy’s dependence on it — to influen­ce e­ve­ry I­ta­lian go­vern­ment for the last half-century. Framing himself as the guarantor of stability and economic deals, Qaddafi won Rome’s support for his remaining in office — sometimes quite literally. In 2008, Libyan Foreign Minister Abdurrahman Shalgham and former Italian Foreign Minister Giulio Andreotti revealed that Italian Prime Minister Bettino Craxi alerted him of coming U.S. airstrikes on Tripoli in 1986, actually saving his life. And as Qaddafi maintained and ex­ploi­ted his ties to ter­ro­rism throughout the 1980s and early 1990s. Italy’s government simply believed that Qaddafi was simply too dangerous and erratic to risk angering.

Finally, Qaddafi played on European fears of illegal immigration. Over the last decade, Libya became a key transit point for sub-Saharan African migrants trying to reach Sicilian shores. Tripo­li had been al­lo­wing human traffickers to bring migrants up through the Sahara to the Mediterranean Sea, where they would board small boats toward Europe. Qaddafi promised to stem the flow of migrants in exchange for bet­ter deals on almost e­ve­ry­thing from fishing rights in the Mediterranean Sea to mi­li­ta­ry coo­pe­ra­tion. The “Friendship Treaty” signed in Benghazi in August 2008 — and ratified by the Italian Parliament in February 2009 — traded 5 billion euros from Italy in “colonial reparations” in exchange for the vague Libyan promise to curb boats full of illegal immigrants. Another memorandum of understanding was signed in July 2009 that allowed the Libyan Investment Authority to own 2 percent of Finmeccanica, the second-largest industrial group in Italy and a major player in defense, aerospace, security, transport, and energy.

If all this black­mail has wor­ked, it is only be­cau­se every I­ta­lian go­vern­ment for the last four decades has wan­ted it to. The “mad dog” of the Middle East — as late U.S. President Ronald Reagan memorably described him — was deemed too close, too dangerous, and too necessary to risk provoking. Yet for all its appeasement, Italy got very little in return. Qaddafi ne­ver de­li­ve­red on his promises, for example to block illegal immigration from the Libyan coast or to win over other African countries’ sup­port for an I­ta­lian pro­po­sal to re­form the U.N. Se­cu­ri­ty Council. Although the number of illegal migrant arrivals did fall temporarily after the treaties were signed, the number of boats started rising again in 2010, perhaps a signal to the Italian government that Qaddafi wanted to negotiate concessions again.

Instead of keeping his end of the deal, Qaddafi spent his time in­vesting mo­re and mo­re of his personal wealth in the I­ta­lian e­co­no­my, filling corporate boards with his clo­se friends and pursuing a strategy of economic penetration that allowed his sons and associates to live in unusual luxury during their long periods of residence in Rome, Milan, Venice, Florence, and Rapallo. Al-Saadi al-Qaddafi, one of his eight biological children, paid an unknown amount of money to train with Italian soccer teams in 2003 and 2006. From spring 2008 to the end of 2010, Prime Minister Silvio Berlusconi met Muammar Qaddafi 11 times, kissing his hand in public, giving him presents like a luxury train a collection of Murano glass, and feting him with an equestrian show at Rome’s Villa Borghese that featured 30 Berber horses.

The more Italy appeased him, the more he perceived the political weakness of the former colonial power. Qaddafi continued to celebrate Italian Evacuation Day every year on Oct. 7, with thousands of people taking part in rallies and military parades to commemorate the victims of the colonial occupation and celebrate the forced exodus of the Italian settlers from Libya. Billboards and painted signs in Tripoli showed Italian flags smashed by Libyan fists. And, though Qaddafi was not religious, an Italian cathedral in downtown Tripoli was transformed into a mosque to show the humiliation of the former conqueror’s culture.

These days, however, it is Qaddafi who is looking weak. In response to his brutal suppression of current protests there, Italy canceled the Friendship Treaty and froze Libyan assets in UniCredit, Finmeccanica, Juventus, Cerruti, Retelit, and many other smaller companies. But Italy can’t claim to be surprised by Qaddafi showing his true colors now. Over the years, the Libyan leader has been all manner of things to the country’s politicians — from anti-Western hero (for the far left) to thuggish terrorist to safe guardian of Italian oil imports. Countless governments and businessmen have sought his favor and his treasure. They may now protest that they’ve had their fill of him, but to be honest, Qaddafi’s been eating their lunch and getting away with it for decades.

NEW FOR SUBSCRIBERS: Want to read more on this topic or region? Click + to receive email alerts when new stories are published on Foreign & Public Diplomacy, Politics, Economics, Middle East and North Africa