A Fear of Three Letters

Traveling through Ingushetia, a republic where people are more frightened of Russia's shadowy security forces than the Islamist militants. 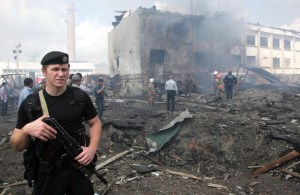 NAZRAN, Russia — In Ingushetia, a rugged outpost on Europe’s southern perimeter, people lower their voices when they talk about the Russian Federal Security Service, the FSB. Sometimes they just call it “the organization with three letters.”

For at least eight years, this tiny republic has lived in fear as one of the most unstable spots in the troubled North Caucasus — even worse, in recent times, than neighboring Chechnya. But the violence is not just the fault of Islamist militants, acting with financial support from jihadists overseas. In truth, it is overwhelmingly homegrown, the result, in large part, of an ongoing campaign of repression by Russia’s security services, dominated by the all-powerful FSB.

During the Soviet period, the Ingush and Chechens (brother nations known collectively as the Vainakh) shared a republic here at the edge of the Eurasian steppe, where hamlets are scattered through the forest-cloaked foothills of the Greater Caucasus Mountains. After the Soviet Union collapsed, the two nations went their separate ways, and Ingushetia stayed mostly out of the two wars in the 1990s fought between separatists in Chechnya and the Russian army.

Around 2002, however, the continuing guerrilla war in Chechnya began to spill into Ingushetia. In 2004, Chechen warlord Shamil Basayev led an attack on police stations and other buildings in Nazran that left 98 people dead, including many civilians.

In response, Russian security forces began extending their ruthless zachistki (“cleansing” sweeps) onto Ingush soil. The sweeps gave way to targeted assassinations and kidnappings of suspected guerrillas by squads of mask-wearing commandos. Russian law demands that prosecutors are informed of any detention within 12 hours and that a suspect is allowed to meet a lawyer before questioning — but the siloviki, or security chiefs, were breaking these laws on a regular basis.

In 2004, security forces whisked away at least 24 men who were never heard from again. Such flagrant abuses quickly swelled the ranks of the insurgency in this tight-knit, patriarchal society where poor treatment of a relative is not easily forgiven. By 2007, the militants were launching almost daily attacks in Ingushetia, strafing police cars and firing on security posts in Nazran and other settlements.

In a republic with the highest unemployment rate in Russia (now 53 percent) — its largest town, Nazran, little more than a sprawling village — this constant, open warfare became a self-feeding inferno. Bespredel, most Ingush called it the last time I was here, in the summer of 2008: a Russian word that translates roughly as “beyond all limits” or “extreme violence.”

After a policeman shot a prominent opposition leader in the head at point-blank range in Ingushetia’s airport later that year, the Kremlin finally realized it had to act to stop the rot. It appointed a new president to the region, Yunus-bek Yevkurov, a decorated and decisive former army general who looked liked he had the nerve to straighten things out.

There was a major setback in his first year — a suicide bomber ramming a Toyota Camry packed with explosives into his car on his way to work — but Yevkurov recovered and in November 2009 made a crucial decision. At a meeting with the republic’s siloviki in his fortified compound, he warned them to rein in their excesses, which, he said, were only spurring the militants.

“To be fair to the president, there was a lull in fatal abductions and extrajudicial killings for about a year from that moment,” Timur Akiyev, director of the Nazran office of Russia’s human rights group Memorial, told me last week. “Then the siloviki couldn’t hold on any longer and they went back to their old methods.”

Yevkurov’s peace ended abruptly. Until the autumn of 2010, things had looked promising. Out of 14 cases of abductions reported to Memorial in the first 10 months of the year, all the victims were eventually released or charged with crimes. (By contrast, in 2009, four people were later found dead or reported killed and five disappeared out of 13 abductions.)

Then on Nov. 22 of last year, Dibikhan Pugoyeva, from Pliyevo village in central Ingushetia, tried calling her 17-year-old son Magomed Gorchkhanov, who was visiting friends in Nazran. Unable to reach his cell phone, she called the wife of an acquaintance who was meant to be driving her son and one of his friends home — and heard that the car had been shot at and set on fire by FSB agents. The acquaintance was dead, and the two passengers were missing.

In a panic, Pugoyeva and her relatives began making calls to the prosecutor’s office and the police. No one had any information. At the morgue in Nazran, a friendly policeman on guard told her that only the driver’s body was inside. Two boys had leapt out of the car and been taken into FSB custody, he said. The FSB denied this.

“I didn’t know what to do,” Pugoyeva, 39, told me recently. “Nobody would give us an answer about what exactly happened.” Then one day in December, she found an envelope in her front yard that someone had slipped under the gate. Inside the envelope was the memory card from a cell phone. On the card was a shaky video recording. It showed a burning car by a roadside and several figures in plainclothes leading two young men with their hands tied behind their backs to another car, where at least one is pushed into the trunk. The recording is fuzzy, but Pugoyeva says she recognizes both her son and his friend, the other passenger, named Aslan-Giri Korigov. “It’s them,” she said. “I’m sure.”

Seeing her son and his friend alive was reassuring, but her ordeal was not over yet. When Magomed had been missing for a month, police summoned Pugoyeva and told her he had been killed in a shootout with FSB officers near Pliyevo. A relative went to the morgue and was able to identify Magomed’s clothes, but he couldn’t identify the remains. “All that was left were lumps of flesh,” said Pugoyeva. “He had been blown up.” Another broken body was discovered nearby, possibly Aslan-Giri, but his family has refused to accept it’s him.

Prosecutors say they cannot open an investigation into Magomed’s alleged kidnapping and murder until his remains are formally identified. Pugoyeva gave blood for a DNA test in December and was told it would take two weeks. She is still waiting.

Magomed and Aslan-Giri weren’t the only ones to go missing this winter. Four days before they disappeared, a group of commandos in a fleet of vehicles without registration plates came to the house of Israil Torshkhoyev, 36, an out-of-work taxi driver, in Altiyevo, near Nazran. After searching his house, they loaded Torshkhoyev into an armor-plated minibus and drove him away. Torshkhoyev’s brother, Mussa, has spent the last three and a half months looking for him without being told a thing.

Then on Dec. 22, in perhaps the most scandalous case of recent months, a 30-year-old Ingush woman, Zalina Elkhoroeva, was traveling across the border from North Ossetia in a taxi when masked men with automatic weapons detained her. She hasn’t been heard from since. Elkhoroeva had been visiting her brother, Timur, who was then in a pretrial detention center in North Ossetia and has since been sentenced to four years in prison for leading a militant group. “Maybe they took Zalina in order to put pressure on Timur,” said her aunt, Taykhant, when I visited her in the Ingush town of Karabulak. “I don’t even want to think what might have happened to her.”

Nazran, it must be said, is calmer than it was when I was last here three years ago. Then, I would hear firing or explosions at night. Last week, an alleged boyevik (rebel fighter) was killed in a shootout in the center of the city and a makeshift bomb was defused in the town of Karabulak, but otherwise it was quiet. Some statistics are improving. An estimated 136 people died in Ingushetia in insurgency-related violence last year, compared with 273 in 2009 (the republic’s population is 530,000). But though the FSB and other outfits can claim partial responsibility for the drop in deaths — they “liquidated” or captured several senior militants like Said Buryatsky and the one code-named Magas, thus reducing the number of armed clashes — they appear unable, or unwilling, to curb their own excesses.

One state official in Nazran put it bluntly in a private conversation. “The FSB just does whatever it likes to achieve its goals,” he told me. “No one can argue.”

It is a growing complaint across the North Caucasus. In September, Arsen Kanokov, the president of Kabardino-Balkaria, called on Moscow to give him direct powers over federal security services on his territory, saying their unwarranted arrests of innocent people were “filling the ranks of the boyeviki.”

According to Batir Akhilgov, a lawyer who works with the families of abductees in Ingushetia, security officers torture their captives for information about the location of rebel camps and safe houses, or, if they turn out to be innocent, force them to admit to unsolved crimes. No one knows who the perpetrators are because they are masked, without ID or insignia. Most analysts believe they are FSB operatives, but they could also be police special forces or officers from ORB, the local Operational Investigative Bureau of Russia’s Interior Ministry.

Akhilgov is representing a young man who was detained illegally for six days, during which he was punched and submitted to electric shocks through his fingers. “This is how it is done,” he said. “The suspect is held for just as long as it takes to beat him into a confession and then he is charged.” He added: “It is practically pointless for me to make a complaint in such cases because they are always ignored or rejected. Our courts are an integral part of the system.”

The impact is clear. One theory about the motive of the Ingush suicide bomber, Magomed Yevloyev, who killed 36 people at Moscow’s Domodedovo airport in January, is that he was provoked by police officers killing his brother-in-law, a suspected insurgent. “Eighty percent of the young men who join the boyeviki do it to fulfill one desire,” said Magomed Mutsolgov, a rights activist based in Karabulak. “Revenge.”

President Yevkurov is not giving up. In January, according to his press service, he once again tried to restrain the siloviki, meeting with them to warn that persecuting detainees would “only create new terrorists.” Yet he seemed to admit his powerlessness in a Feb. 14 newspaper interview: “No one is guaranteed against a violation of the law during the active phase of a special operation.”

For now, the Kremlin appears unfazed by the ongoing brutality. On Feb. 22, President Dmitry Medvedev led a meeting of Russia’s National Anti-Terrorism Committee in North Ossetia, the Christian republic bordering Ingushetia to the west.

He spoke passionately about the need to attack the militant “degenerates,” “in their dens, in their hiding places, wherever they are.” Those insurgents “who want blood will choke on their own blood,” local news agencies reported him as saying. Of abuses by the security services, he said nothing.

Mutsolgov, whose own brother, Bashir, a schoolteacher, was kidnapped and vanished without a trace eight years ago, is impatient for change. “If we want to save Ingushetia, what we need is new schools and hospitals and factories. We need equal rights before the law. We need a sense of hope,” he said. “What we don’t need is terror and injustice.”