Arab Revolutions Through the WikiLeaks Lens 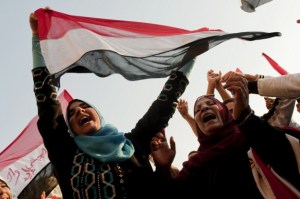 In Tehran, there is a small gift shop in the southeast corner of the old U.S. Embassy (the famous “Den of Spies,” as it has been known since being converted to a Revolutionary Guards base after the 1979 revolution). Among the many less than enticing items it sells, next to gruesome postcards of “martyrs” from the Iran-Iraq War, is a bound set of reprinted U.S. diplomatic documents. Embassy staff shredded the documents frantically while the building was being overrun, but to no avail. Ayatollah Khomeini’s volunteers laboriously pieced together the shredded cables the old-fashioned way, with tape, perhaps crying out “Aha!” every now and then when something incriminating turned up — say, a memo revealing that the United States was sending the shah even more military equipment. The result, however, is an anthology of turgid, less-than-thrilling bureaucratese. When I visited a year ago, the copies sat dusty on the shelves.

The 2011 wave of Arab revolutions has its own tranche of leaked U.S. diplomatic cables, though in the present case, they have come largely as prologue to revolution rather than as epilogue. Their only direct role in the revolutions was to provide further proof of the profligacy and corruption of erstwhile Tunisian President Zine el-Abidine Ben Ali, and perhaps also some measure of reassurance that the United States, too, knew he was a thief and scoundrel. Even the most cynical critics of the United States haven’t found much in the WikiLeaks cables to condemn it. The cables are dutiful, intelligent, and maybe a tad officious. They are not prescient, but then again who was? Of the hundreds of cables leaked from Cairo, Tunis, and Tripoli, not one predicts imminent collapse, nor anything beyond a slow, eventual (if not untroubled) transition of power.

So the obvious question is: What has the State Department been up to all these years? And have these cables, leaked with such fanfare, been rendered moot by the revolutions? The impression that emerges from reviewing the cables now is not so much that the revolutions have rendered them dull and obsolete, but that they have rendered the United States itself — and its gradualist approach — dull and obsolete. U.S. diplomats cared about all the right things, but apparently had no power to make them happen because their perceived clout wasn’t enough to persuade anyone to reform. Or, alternately, they understood the fault lines, but diplomatic imperatives forced them to keep relationships intact, instead of proceeding on a course of marginal, linear improvements. In any case, their approach did remarkably little. The authors of the cables don’t sound like agents of a superpower. They sound like Canadians, with better access.

The questions the diplomats asked are obvious and hoary: What comes next after the current generation of Arab autocrats? How can we maintain relations between Foggy Bottom and the politicians and military men who might plausibly take power? These concerns are not just realpolitik, either. The diplomats meet with and express dignified concern for members of democracy and civil society groups, and they correctly detect and diagnose outrages like police brutality and brazen corruption that are corroding the authority of their partner governments. But now that we know the fate of Ben Ali and Egypt’s former president, Hosni Mubarak, the cables read as a catalog of failed overtures and suggestions, ultimately ineffectual, to get these leaders to reform fast enough to avoid revolution. Cables from places like Libya, Bahrain, and Oman were even less urgent about the need for democratic and popular reforms, though perhaps merely because none of those places ever had much democracy activism in the first place.

The problem was not one of knowledge. Diplomats knew perfectly well that Egypt and Tunisia had huge long-term troubles, and in the former case they repeatedly identify many of the exact grievances of the Tahrir protesters as flashpoints for future dispute. They knew that lack of democratic reform was a major issue, and the cables show a touching concern for “democracy promotion” and progress of human rights groups, including those with Islamist inclinations. In Tunisia, they urged “a strong focus on democratic reform and respect for human rights,” but with the caveat that “Major change in Tunisia will have to wait for Ben Ali’s departure.”

But what did all these worries, insights, and good intentions amount to? In the case of Libya, where cables detailed fascinating palace gossip about Col. Muammar al-Qaddafi’s family politics, the United States didn’t have much influence anyway, so one couldn’t really expect much more (at the “Secret” level, anyway) than observation. But in the case of Egypt (and, to a lesser extent, Tunisia), the cables are shocking in how little they reveal 30 years of patronage to have bought. The debate between the U.S. and Egyptian governments comes across as vaguely pathetic on both sides. “The [government of Egypt] remains skeptical of our role in democracy promotion,” Ambassador Margaret Scobey wrote in December 2008, saying that her Egyptian partners worried that democracy would end up “empowering the Muslim Brotherhood.” All true, of course — and just as true as it was 20 years before.

Part of the erosion of U.S. influence was due, it appears, to Mubarak’s impression that the United States couldn’t apply its influence in subtle and effective ways or keep its allies safe. Mubarak seems to have spurned U.S. efforts to democratize by invoking the Shah of Iran, who made concessions, was rapidly toppled, and died in exile (in Cairo, of all places). “Wherever [Mubarak] has seen these U.S. efforts,” Scobey wrote, “he can point to the chaos and loss of stability that ensued.” So instead the United States was reduced to the baby-steps approach of funding democracy groups, which may well have been the only responsible option but was minor and ineffectual nonetheless. The cable authors are Cassandras, capable of calling out warnings but apparently incapable of convincing anyone to change.

Unlike in Tehran, the cables haven’t yet settled into the status of historical documents. The notes about the Qaddafi family’s infighting are salient at this very minute, and the nuanced portrait of Egypt’s Field Marshal Mohamed Hussein Tantawi, the defense minister who now runs the country, is rich for its impressions of the man as “Mubarak’s poodle” with all the denigration that implies. These impressions remain relevant, to say the least, even if the Pentagon, rather than the State Department, is emerging as the most salient partner to Egypt’s rulers.

Perhaps there are cables that show the United States to be a regional puppet master, or even a regional player capable of exerting a teeny bit of influence, among the 245,000 cables still undisclosed by WikiLeaks. But for an American to read the cables so far made public is an exercise in humility. The take-away lesson of the leaks and the revolutions may be that once a foreign government becomes so out of touch that the United States can’t induce it even to do something that is clearly in its own interest, the point of no return has been reached and the government is doomed.

When I lived in Egypt, I often walked by the U.S. Embassy fortress in Garden City, always one of the most serene strolls in Cairo because security concerns kept it blocked off to almost all pedestrian and motor traffic. Across from the consular entrance, a lone empty shop sold oranges — to whom was not entirely clear because there was rarely a potential customer in sight. I often wondered what those on the other side of the fortress walls were up to. Now we know: They were watching the world pass them by, just like the rest of us.

Give Up on Proxy Wars in the Middle East