In the first installment of a regular weekly dispatch, Anna Badkhen returns to Northern Afghanistan to find a freezing, chaotic place. 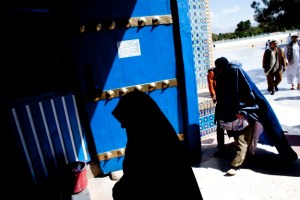 Over the next five weeks, Anna Badkhen will be posting weekly dispatches for ForeignPolicy.com from the villages and towns of Northern Afghanistan that she visited last year to write her FP series “The Crossing,” which became the ebook Waiting for the Taliban. This time, just months before the first U.S. troops are scheduled to be withdrawn from the country, she’s exploring a far different place. The north, which had been the safest part of Afghanistan immediately after the NATO-led invasion, had begun a slow derailment by 2010. With the Taliban now controlling new swaths of territory, however, the wheels have come off entirely. It’s now a much bleaker — and more dangerous — landscape.

MAZAR-E-SHARIF, Afghanistan — Cold clasps the loess plains that curve toward the great Oxus. It has whitewashed with snow the saw-tooth jaws of the Hindu Kush. It has eaten raw the fingers of street vendors and stunted the emerald sprouts of winter wheat, barely visible against the dun monochrome of the dormant northern desert. Afghan friends tell me this has been the coldest winter here in a decade.

It has also been the most violent.

I last journeyed to the region 10 months ago. At the time, the Taliban was advancing through the north virtually unchallenged, and the people, frustrated by unfulfilled promises of international aid and prosperity, wondered whether puritanical and cruel governance by the Islamist militia may be a better option than the anarchy, corruption, and abandonment that followed its ouster in 2001.

Since that visit, Taliban insurgency has bitten off new chunks of territory in the north. In Balkh province, of which Mazar-e-Sharif is the capital, villages I visited last spring have fallen to the insurgency. Men have been kidnapped from the city. The deployment of thousands of American troops here this winter only seems to have ratcheted up hostilities; last Saturday, March 5, a bomb detonated beneath an overpass as an American convoy drove past.

Nighttime raids by NATO forces, which Gen. David Petraeus says will help turn the tide of insurgency, are instead turning against the Americans the very people who had lauded them as liberators 10 years ago. Last week I lunched on rice and bread with one village elder, a former mujahid, who offered a faint smile of recognition when it turned out we had spent time on the same front in 2001: Have we shared front-line cigarettes in Khojaghar? Trench tea in Kalak? Then, as he poured me some more green tea, he threatened to take up arms against the Americans for swooping into his village at night to detain a suspected Talib.

I returned this year to research a book on timelessness. But though 80 percent of Afghans today tenaciously persevere in the same landscape Alexander the Great must have beheld when he laid waste to Balkh in 327 B.C., the conceit that Afghanistan exists outside time is only half true. The lifestyle here may have remained unchanged for millennia. But the life is becoming undone so rapidly I often feel as though I have returned to a different country.

It seems impossible for things to get worse in a place that has been systematically brutalized by invasions and fratricides for thousands of years. But nothing is impossible. Within 20 minutes of our reunion, the matriarch of the family hosting me warily tells me of a bomb that killed five people at the recent wedding of one of her sons. Her other son shares a security warning he has received from colleagues in Kabul: Several suicide bombers from southern Afghanistan have arrived in Mazar-e-Sharif and are scouring for a convenient time and worthy targets to strike.

According to the Kabul-based Afghanistan Rights Monitor, most of the 2,421 Afghans who perished in the violence in 2010 — the highest civilian death toll since the beginning of the U.S.-led invasion — were killed by insurgents. The next victim may be one of the hollow-eyed boys who haul cement for pennies near the main Mazar-e-Sharif bazaar. It may be one of the underpaid doctors at the pediatric hospital, which this time of the year is so overwhelmed with patients dying from complications of respiratory infections it has to arrange the children two or three to a cot.

The next victim may be one of my hosts.

The lights in the house sizzle and go out: Electricity, in the parts of Afghanistan where it does exist, remains sporadic. The halogen heater in my room blinks out as well. I put on a coat over a coat and step outside.

The frigid city exhales a familiar breath of onions and juniper roots Afghans feed the haphazardly soldered, iron bukhari stoves that heat their rooms in winter. The unpaved streets ooze black slush, old grudges, millennial regrets. A man in a coat of belted tick weaves a small camel caravan through the traffic of taxi jalopies and motorcycle rickshaws. The air is still like glass. In the distance, thousands of fabled white pigeons flock to the turquoise dazzle of the Blue Mosque.

The centuries-worn routine of the city is a salve, something to steady myself against. I head to the mosque.

Mazar-e-Sharif means “tomb of the saint” in Farsi; the city is named after the shrine believed to hold the remains of both Imam Ali, the Prophet Mohammed’s son-in-law, and Zoroaster. The 15th-century, double-domed Blue Mosque built atop that shrine shimmers in the center of town. The 10,000 white pigeons are said to roost atop its spiral minarets and in the vaulted arch of its mihrab; a local legend says that any gray pigeons that join the flock becomes white in 40 days. Pilgrims journey here in search of sanctuary or comfort. I am one of them.

I take off my shoes at the mosque’s north gate. The tiles ricochet with the sharp applause of the pigeons’ flutter.

Last spring, I came here to see a friend, an old muezzin I had met during my first visit to the city a decade ago. He was 79: astoundingly old by the standards of a country with an average life expectancy of 44 years. I hadn’t been sure he would remember me, but he did. We talked about books — he was reading a tome on Sufi mystics; I was writing a book about war — and about the unending conflicts that brutalize the land outside the cobalt, turquoise, and ocher walls of his mosque. “Come back,” he told me when I stopped by again before flying home.

I walk barefoot across the marble-tiled yard. Around me other pilgrims shuffle briskly. The cold from the marble tiles bores into our soles. I find the muezzin’s tiny sky-blue door at the base of a spiral minaret and look in.

The old man rises slowly from an ill-looking mattress to greet me. The skin beneath his brows, droopy when I saw him last, is now so loose it conceals his left eye completely. Sinister black sores blotch his forehead and cheeks. He offers me his hand and I take it with both of mine and explain who I am. He shakes his head.

My heart shatters against the kaleidoscopic blue tiles. I bid farewell to the old man and remind myself what a long and fine life he has had, and how gracefully it’s ending. I remind myself that his aging has nothing to do with the way Afghanistan is careening toward omnipresent bloodshed.

White pigeons clap their wings indifferently as I pull on my dirty shoes. For hundreds of years, throughout scores of invasions and wars, generations of pilgrims have received the same disinterested ovation.

When I get in the car, my translator points out a black spot on my brow. I touch a frozen finger to it. It’s soot. I have no idea how it got there.

<p> Anna Badkhen is the author, most recently, of The World Is a Carpet. She is working on Walking with Abel, a book about transience. </p>
Tags: Afghanistan, Central Asia, Economics, Taliban
Latest