The Tale of Forty Maidens

From ancient legend to last week, in Afghanistan, even a castle can't keep women safe. 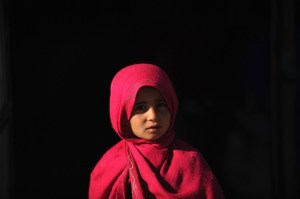 MAZAR-E-SHARIF, Afghanistan — The first women’s shelter in Afghanistan rises obliquely above the smog-choked orchards on the southwestern edge of the city, trimmed in a mother-of-pearl veil of almond blooms: the abraded pre-Islamic ruins of Qaleh-e-Chel Dokhtaran, the Castle of Forty Maidens.

When Genghis Khan’s horde laid waste to the kingdom of Balkh, a legend tells, 40 young Bactrian virgins sought refuge within the fort’s thick crenelated walls of clay and mud brick. For 40 days and nights in the castle’s endless enfilades of vaulted chambers the women prayed that they be killed rather than raped by the Mongol conqueror’s mounted legions.

The latest invasion to roll across these ancient plains has resulted, to a degree, in a tentative attempt to ease the Afghan women’s dole. Since 2001, international organizations, private donors, and Western governments have funded more than a dozen safe houses to shelter women and girls from sexual violence, physical abuse, forced marriages, and honor killings. One of the shelters is not too far from Chel Dokhtaran, operated by a Mazar-e-Sharif nonprofit that has provided legal assistance and refuge to more than 700 women since the safe house opened in 2007.

For more than a year, the shelter has granted asylum to Hakima, a moon-faced girl who cracks her pale fingers incessantly when she speaks to strangers. Hakima’s father, a day laborer, had given her away as baad — a type of compensation for debt or crimes in which a girl is handed over to the family of the aggrieved as a bride, a tradition that Human Rights Watch has called “one of the most abusive customary practices in Afghanistan.” In return, Hakima’s street vendor husband forgave her father a debt of about $700. She was 13 years old.

The beatings began a month after the wedding. Hakima’s husband whipped her with power cables, beat her, kicked her. Each morning he would lock her in the house, and when he returned from work he would beat her some more. After a year of abuse, she ran away, first to her uncle’s house, then to her sister’s. For a few nights, she squatted at a mosque. The shelter’s lawyers are now working to secure her divorce.

But changes to traditional ways do not root easily in Afghanistan’s hardscrabble, biblical soil. The concept of women’s emancipation arouses suspicions here; the very expression “free woman” — khanum free, the adjective transliterated from the English — is a post-2001 neologism that means a loose woman, a prostitute. Some say the shelters’ mere existence undermines family values and encourages women to leave home. Some say the safe houses are brothels in disguise.

This year, the government in Kabul drafted a new set of rules that, if approved, will require the women who seek refuge to justify their flight from home before an eight-member government panel, which then will determine whether they should remain at the shelter, be sent to jail, or be ordered back home to face more violence or even death for having escaped. The rules appear to be an effort to appease the most conservative Afghans as the government tries to negotiate a peace deal with the conservative Taliban insurgency — a collective baad of sorts.

Not that the smidgen of shelters has made much palpable difference in the lives of Afghan women. The United Nations calls the rate of domestic violence “extremely high,” and a recent report from a top Afghan health advisor shows that nearly one-third of young Afghan women suffer from psychological problems and their suicide rate has risen 20 times since the 1970s. To those brave enough to seek outside help, temporary refuge at a safe house offers no long-term assurances. If Hakima gets her divorce, what will she do? She has never finished elementary school. She has no trade. She is 18 years old, and the best she can hope for is that another, kinder man agrees to marry and support her. Not a sure bet. Afghan men, like Genghis Khan’s horsemen who plundered Balkh in 1221, prefer virgins.

On a Friday morning 790 years after Genghis Khan massacred and despoiled Balkh, a group of men with pickaxes and shovels drive through Chel Dokhtaran’s sole crumbling gate in a zaranj moto-rickshaw and set to scraping laminae of ancient walls and roofs into their rusted burgundy truck bed. No treasure hunters, these men: They have come to get some dirt with which to level a patch of potholed road in front of their house in the valley below. Bits of chert, pottery shards, rock, and dust clop against the metal bed floor. Who can guess which priceless treasures, which mementoes of war and grief will pave these men’s street? I ask them if they have heard of the legend of the 40 maidens.

“No clue,” one tells me. “All we know is this is good dirt and there’s no police around to tell us not to dig here.”

I wander around the ruins all morning, asking several other people about the castle’s history. All my interlocutors are men: Women here rarely take leisurely strolls, even on Fridays. One tells me he has only heard that the castle once housed women who were “very brave and fought like men.” Another cackles: “All I’ve heard is that they were all lesbians.”

There are no plaques or signs near the castle to explain Chel Dokhtaran’s legend or the history of its name. Above the gnawed stub of the castle’s northeastern tower — a steep climb up a set of stairs smoothed into tentative and uneven waves by centuries of pilgrims, wind, and rain — strips of colorful cloth flutter from two wooden spikes near a concrete grave marker. The writing on the marker explains that the shrine belongs to one Rez Bai, son of Ghulam Rasul, killed 18 years ago. Who was Rez Bai, and who killed him and where and what for, the marker does not say.

A couple of new scavengers arrive, armed with shovels: a vegetable farmer named Yarmohammad and his strapping teenage son, Mohammad Feiruz. They clamber a little ways up the melted candle wax of the northern wall and stab at it with their shovels, scooping out pulverized mud brick that once protected the legendary maidens. They will mix this loot into the overworked soil of their farm, leveling out the alkalinity of the depleted earth so that it bears thicker watercress, crispier lettuce, larger potatoes.

“We always come here to get extra soil,” Yarhomammad shouts down from the rampart. “This soil has powerful chemicals.”

There indeed may be magic in these old walls: The legend of Forty Maidens suggests so. After 40 days and nights of despondent prayer, the story goes, the maidens vanished. Not quite a happy ending. Then again, for Afghan women, they rarely seem to be.

<p> Anna Badkhen is the author, most recently, of The World Is a Carpet. She is working on Walking with Abel, a book about transience. </p>
Tags: Afghanistan, Economics, South Asia
Latest