The Gorge of Many Sorrows

Every month, 40 Afghans are killed or injured by Soviet-era land mines. Meet two of them. 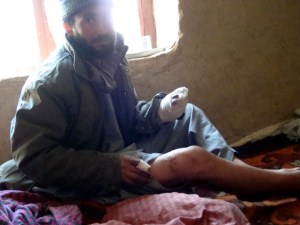 Abdul Bashir, a shepherd and land mine victim.

MARMUL, Afghanistan — The ravine is called Shadian: the Gorge of Many Joys. The women’s brilliant embroidery echoes the spring dazzle of its terraced valleys, of green mountain rills that generously water its cornfields and apple orchards. The men, whose clay homes cover its vertiginous scarps, tell proud stories of their fathers, brave minutemen who were among the first in Afghanistan to take up arms against the invading Soviets more than 30 years ago.

But Shadian, too, is the gorge of countless miseries. For that internecine war, long since finished and eclipsed by more recent ones, continues to collect a ghastly annual oblation of limbs here.

Land mines lie hidden in these northern Hindu Kush ridges. They wait in the wild pistachio groves that cascade in puffs of fuchsia down the copper-streaked cliffs. In the pebbled beds of north-flowing freshets that carry precious snowmelt to the thirsty Bactrian desert. On the alluvial slopes patinated with spring grass upon which shepherds graze their flocks.

And in the spring, when snowmelt rushes down the mountains, mines — light, plastic disks barely larger than a compact mirror — tend to migrate. A rivulet may push one downstream. A torrent of muddy snowmelt may wash up another at some farmer’s doorstep, or anchor it at an old rock wall on a grazing hill.

The International Committee to Ban Landmines reports more than 73,000 mine victims worldwide over the past decade. In the last five years, at least 20 of them were from Marmul. Most of them were injured between February and May, when water gushes in irradiant streams past Marmul and north toward the Amu Darya, the river that marks Afghanistan’s northern frontier.

Last month, two brothers herding a flock of 400 goats and sheep to pasture accidentally tripped the firing pin of an antipersonnel mine lodged in a loose rock wall demarking some arcane boundaries. The mine scythed off most of Abdul Bashir’s left hand, gashed his right thigh, and lacerated his chest. Shrapnel deeply rent the stomach and arms of his younger brother, Abdul Farid.

The shepherds, both in their 20s, belong to the generation of Afghans who grew up with a grim computation in the back of their minds: Planted mostly by the Soviet troops and anti-Soviet mujaheddin in the 1980s, the estimated 10 million mines in Afghanistan’s soil are enough to maim or kill a third of the country’s population. Most of the explosives lie in wait in grazing fields and farmland; most of their victims are civilians. Just 20 pounds of pressure are enough to detonate such a device. Unexploded ordnance kills or injures, on average, 40 Afghans each month.

Abdul Bashir and Abdul Farid had taken the same route to pasture each spring for almost 20 years: down the slopes of red ferric soil and white limestone; past the two rusted exoskeletons of T52 tanks, one barrel raised at the mountains in gratuitous warning, the other pointing to the ground in defeat; then at the spring pooling with clear, sweet mountain water, a sharp southward turn into the hills girdled with centuries’ worth of hoof paths. It was the same route their grandfather took when he was still alive — except at that time, there were no tanks.

When they set out, the brothers were certain that they were not in danger. But you can never be certain with land mines, especially in the spring.

Successions of demining teams have been to Shadian Gorge. They knelt in the dirt in their blue Kevlar aprons and masks of ballistic glass and scraped the hard soil, scattered fist-sized rocks painted red and white to mark potential minefields and cleared areas. They spray-painted boulders and cliffs with war’s familiar graffiti: tall white check marks and letters spelling “ERW” (for the sinisterly poetic “explosive remnants of war”) and “UXO” (for “unexploded ordnance”). After their most recent visit to Marmul last winter, sappers from the U.N. Mine Action Service told the district leaders that Shadian Gorge was “95 percent clear” of explosives.

“These remaining 5 percent, they pose a major problem for us,” says Mohammad Sharif, the deputy governor of this community of 20,000 farmers and shepherds. “People here live off the land. What should we do when the land blows up?”

At the rate of 40 a month, the toll extracted by land mines may seem small compared to other atrocities Afghan civilians suffer today. More than 10 times as many noncombatants were killed and injured last year in the war between NATO and the Taliban, for example. Afghans whose provinces have fallen to the Taliban endure severe Shariah justice that involves mutilation and public executions — such as last summer’s stoning murder of an eloped couple in Kunduz province, 100 miles east of Marmul. But NATO planners expect that they will somehow curb the insurgency this year, and that this war will wind down by 2014. By contrast, the United Nations estimates that it will take mine-clearing organizations 20 more years to clear most of Afghanistan’s minefields.

More than 2,000 communities in Afghanistan live on or near land contaminated with explosives. Some of these areas are too difficult for sappers to access: Ten years after the U.S.-led invasion began, most of Afghanistan’s roads are no more than pairs of parallel grooves that steeply climb granite mountainsides, or barely visible tracks in fine desert dust. Thousands of settlements have no roads leading to them at all, and can be reached only by foot or pack animal. No car, for example, can access the valley where Abdul Bashir lost his hand. To get to Marmul from Mazar-e-Sharif, cars must ford a rapid mountain stream for at least a mile.

By the time I visited Marmul last week, Abdul Farid’s wounds had healed enough to allow him to return to work and he was out with his flock, perhaps navigating another minefield. Abdul Bashir greeted me from a blanket of rolled camel wool at his father’s house, where he spends his days clutching what remains of his left hand.

He is not sure how much longer he will be able to afford the painkillers his doctor has prescribed, so he has been rationing them. Nor does he know when he will be strong enough to shepherd again. For now, his father and brothers are taking care of him and his wife and three little daughters, who whisper behind a green embroidered curtain while their father receives visitors. But in Marmul, like in most of Afghanistan, few can afford to feed that many extra mouths for long.

A mine expert in Afghanistan once told me that no one can guarantee that every single land mine in Afghanistan will eventually be found and deactivated — meaning that 20, 30, or 40 years from now a land mine left on some mountaintop may eventually slide down on a sheet of melting ice, or roll downhill when an earthquake shudders Afghanistan’s violent tectonics. A shepherd’s arm here, a child’s leg there. Each lost limb means another Afghan family spirals deeper into poverty; each potential minefield condemns another orchard to rot, another field, once fertile, to stand fallow. Each unexploded device is a latent wound of a past war, a time warp waiting for someone who most likely was not even born when the mine was planted.

<p> Anna Badkhen is the author, most recently, of The World Is a Carpet. She is working on Walking with Abel, a book about transience. </p>
Tags: Afghanistan, Economic Development, Economics, South Asia
Latest