The Colonel and Friends

How do you solve a problem like Qaddafi? Call in some old camping buddies.

View a slide show of Qaddafi and friends here.

Nothing says "loser" like going to a fancy international conference and discovering you can't score a place to sleep. That's what happened to Libyan leader Col. Muammar al-Qaddafi when he tried to pitch his signature mobile headquarters, a Bedouin tent, somewhere in New York for a 2009 U.N. visit. Rejected from Central Park; rejected in Englewood, New Jersey; rejected in Westchester. After Qaddafi ended up a refugee at his own diplomatic mission in Manhattan, one British tabloid concluded his only competition for head-of-state isolation must be Kim Jong-il. 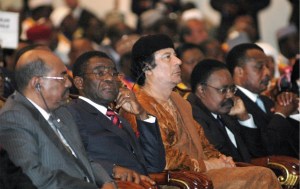 View a slide show of Qaddafi and friends here.

Nothing says “loser” like going to a fancy international conference and discovering you can’t score a place to sleep. That’s what happened to Libyan leader Col. Muammar al-Qaddafi when he tried to pitch his signature mobile headquarters, a Bedouin tent, somewhere in New York for a 2009 U.N. visit. Rejected from Central Park; rejected in Englewood, New Jersey; rejected in Westchester. After Qaddafi ended up a refugee at his own diplomatic mission in Manhattan, one British tabloid concluded his only competition for head-of-state isolation must be Kim Jong-il.

The New York press had a field day with the wandering colonel and his team of butch female bodyguards. But perhaps Qaddafi’s entourage had just been spoiled by warmer welcomes elsewhere. When he arrived in Durban, South Africa, for the African Union launch in 2002, Qaddafi was able to erect his tent on the vast estate of one of South Africa’s wealthiest sugarcane farmers, his digs coordinated by a South African government minister. “At first he was, I don’t want to say weird, but he was talking very loud and not looking me in the eye,” the farmer told me over the phone. After the intense first moments were over, though, he found himself impressed. “He said he wants to be the golden leader of Africa. He wants to unite Africa,” he said. “I have very pleasant memories of Colonel Qaddafi. I would like to sit with him again around a campfire.”

Americans often assume that because we find Qaddafi “eccentric,” “bizarre,” and “rambling,” he must also be unloved everywhere. Never has this assumption operated more than this winter. “We are lucky that Colonel Qaddafi has few if any outside backers, with even the Arab League endorsing intervention,” marveled Max Boot in the New York Times. Charles Krauthammer contemptuously concluded that Qaddafi’s particularly “unstable and crazy” character merely made him that much more likely to fall in the democracy wave sweeping the Arab world. But Qaddafi isn’t just an Arab. He is also an African. And as an African, he is beloved. By way of illustration, allow me to introduce you to Nelson Mandela’s grandson, Zondwa Gaddafi Mandela.

As it turns out, Mandela and Qaddafi go way back. Qaddafi supported Mandela’s liberation movement in the 1980s, and in the mid-1990s Mandela traveled to Tripoli — flouting a U.N. travel ban — to thank him. He even granted Qaddafi the final state visit of his presidency, in which he praised Qaddafi as a “dear brother.”

But Qaddafi’s connection to the rest of Africa — the one that inspired thousands of Malians to march on Friday on the French and U.S. embassies, protesting the West’s airstrikes — is mostly a newer creation. Wounded by the way Arab leaders cold-shouldered him as he struggled with sanctions in the 1990s, Qaddafi began turning away from the Middle East and cultivating Africa as soon as he regained footing. In the late 1990s, he started to play African peacemaker, negotiating between warring Uganda and Congo and setting up tête-a-têtes between the Sudanese government and its rebels.

He didn’t always get the results he wanted. Indeed, the idea of Qaddafi-as-peacemaker itself was a little outrageous, since Libya had been backing disruptive African coups for years before his change of heart. (See: Charles Taylor in Liberia.) But the gratefulness with which he was received gave Qaddafi an idea. Africa would work better if the continent were not separate, rivalrous nations but rather one giant country, a “United States of Africa,” with Qaddafi as its “mayor.”

He proposed his idea at the 1999 Organization of African Unity conference held in Surt, his hometown. It was met with ridicule. “In the future we’ll form the United States of Pluto, against other planets,” sneered a journalist from Swaziland.

But Qaddafi wasn’t so easily dissuaded. He just started carrying out his vision without asking permission, like the high school suitor who, after his crush rejects him, simply makes himself the de facto boyfriend by always offering the snazziest ride home. He put up soaring new government towers in the capitals of Niger, Burkina Faso, Senegal, and Mali. They pointedly bore his name. Sometimes he blithely funded anti-government rebel groups at the same time.

Inconsistency never bothered Qaddafi. He got his hands into everything. He championed the glitziest style of modernization, plowing $5 billion in investments into telecoms in Niger and Zambia, banks in Chad and Mali, and five-star hotels in Accra and Johannesburg. Simultaneously, he built mosques to promote the spread of piety. And he pampered Africa’s traditional tribal leaders, who often felt snubbed in Africa’s mad race to embrace the secular West and religious piety alike. He renovated the palace for the boy prince of the oil-rich Ugandan traditional kingdom of Toro, for instance; as thanks, Toro named him its “Defender of the Crown.” In 2008, he flew some 200 traditional chiefs up to Tripoli. Dressed in a World’s Fair of colorful ethnic costumes, they named Qaddafi Africa’s “King of Kings.”

Of course, Qaddafi’s involvements with Africa have his classic manic edge. In recent years, he has usually been photographed wearing a large black brooch in the shape of Africa pinned to his chest, and visitors to Tripoli describe banners over the streets depicting the colonel over the slogan “Africa is hope,” or the colonel “as a savior as sun rays break over his shoulder and a crowd of black men and women reach toward him with outstretched arms.”

But the very fact that his engagement with Africa has been a little Messianic — and pursued with the flamboyance only an oil magnate can muster — has given it a perverse sort of legitimacy. Many foreign governments approach Africa with aversion, dealing with its governments out of financial temptation or necessity but trying to conceal their involvements at the same time. Qaddafi, on the other hand, openly woos not only elites but ordinary people, his potential subjects. He didn’t only funnel money into Mali to help the government. He personally traveled to Timbuktu to lead a packed prayer service on the Prophet Muhammad’s birthday. Often at such events he tries to stir up pan-African and anti-colonial fervor. “We must fight the hatred of America for Africa,” he likes to say.

With the Western focus on the Libyan crisis as part of the “Arab revolutions,” many observers have missed how crucial Qaddafi’s relationships with Africa have become. After Qaddafi didn’t fall right away, as a tyrant without any foundation ought to, reporters noted he seemed to be relying on a stream of “African mercenaries” for his counterattack.

Who were these people? Jeffrey Gettleman of the New York Times was about the only one who sought out an answer. In Mali’s capital of Bamako, he found recruiters rounding up men to fight for Qaddafi. Some were getting money, yet they also swore they would fight for him whether or not they were paid. One, Elhadj Maiga, had printed up his own handmade flyers with a picture of Qaddafi and a line in French urging his fellow Malians to “support the leader of the revolution.” Gettleman empathized with Maiga’s attitude, noting he prays at a mosque Qaddafi built, watches TV on a Qaddafi-funded network, and comes and goes under Qaddafi’s $100 million government tower. “We’re all ready to die for him,” Maiga told the reporter. “He’s done so much for us, after all.”

The Arabs he spurned might want Qaddafi out. African leaders, though, have been torn. President Jacob Zuma of South Africa allowed his U.N. representative to support a no-fly zone, but appeared to regret that stance days later, warning the West not to “invade” an African nation. Likewise, Uganda’s President Yoweri Museveni has simultaneously lambasted Qaddafi for his arrogance and the West for its arrogance in attacking him. The African Union, which receives a fat chunk of its dues from Qaddafi, has also dithered, releasing contradictory statements. Some of the most explicit words from prominent Africans have been in Qaddafi’s favor. “Some people see the colonel as the devil, but he’s not,” asserted a spokesman for the Malian government. “He’s a great African.” The president of Namibia lamented that “some of our brothers and sisters in Libya” — meaning Qaddafi’s supporters — “are being attacked by non-African sources from overseas.”

The absence of clarity from African leaders leaves a void in which grateful Africans like Elhadj Maiga take things into their own hands. Even as the anti-Qaddafi rebels begin to re-advance with the help of the West’s airstrikes, African fighters continue to stream into the country to bolster Qaddafi. Their support is bound to make a showdown over Tripoli bloodier than perhaps anyone has anticipated.

At the same time, though, Qaddafi’s African ties present an opportunity. Down here in South Africa, there are rumors Zuma is fixing to fly north and initiate a family-intervention-style heart-to-heart with Africa’s erstwhile father figure. It’s not a bad idea. To head off a bitter and prolonged last stand, African leaders could mount a more serious mission — perhaps led by Rwanda’s Paul Kagame, who has offered some of the continent’s strongest criticism of Qaddafi — to let the colonel know it’s time, at last, to fold up his tent.

Eve Fairbanks, a writer living in Johannesburg, is at work on a book about South Africa.
Tag: Economics