Syrian President Bashar al-Assad may have shaved off his mustache, but it's going to take a whole lot more than that to convince the world that he's not a dictator. FP investigates the whiskers that autocrats wear.

Nearly every aspect of the father of modern Turkey’s life was freighted with historical significance, and his upper lip was no exception. The soaring mustache Ataturk wore as a young army captain (above, in 1907) was popular in the Ottoman era, modeled on the grooming style of Kaiser Wilhelm II, which reflected the influence of German culture on the Turkish intelligentsia of the period. But by the time Ataturk took office as the autocratic ruler of the new Republic of Turkey in 1923, his mustache had been pared back to a conservative bristle; as he guided Turkey toward economic and political liberalization in the years that followed he shaved it off entirely, as a symbolic example of Turkey leaving behind its Ottoman past in favor of a modern future.

But the Turkish mustache was not so easily vanquished; it continued to advance and retreat, in both size and significance, in the decades that followed. In the 1970s, a walrus-style mustache became a popular accessory among Turkey’s leftists. By the 1990s, it had evolved into a class symbol distinguishing the hirsute lower and middle classes from the clean-shaven urban elite. It returned to power in 2002 atop the lip of current Prime Minister Recep Tayyip Erdogan, a gesture of his populist appeal. 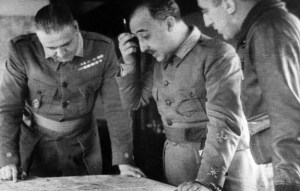 Of all the dictatorial mustaches of mid-20th century Europe, Spanish General Francisco Franco’s was undoubtedly the least memorable, which perhaps explains why it does not carry the stigma today of its German and Soviet contemporaries. But the blandness of the Spanish model belies its influence: A Franco-style martial brush was a near-mandatory part of the Latin American military dictator uniform well into the 1980s. For years after Franco’s death, his pilatory legacy adorned the faces of Chile’s Augusto Pinochet, Guatemala’s Fernando Romeo Lucas García, and half the officers in Argentina’s post-Perón junta, among others. 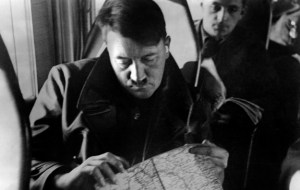 When it first appeared on men’s faces in the late 19th century, the mustache that Adolf Hitler made infamous was known as the “toothbrush.” Not so much today. The Hitler mustache, Rich Cohen wrote in Vanity Fair in 2007, “did not only die with the Führer — it was embalmed with him. It was his essence, and so it has been relegated to the black book of history.”

All the stranger, then, that Hitler’s signature facial accessory was originally of American, not German, extraction — and that its arrival in Germany was at first greeted with some ambivalence. According to a 1907 New York Times dispatch from Berlin, German women hated the thing, vastly preferring the Kaiserbart that Ataturk had once coveted. “Man is naturally very ugly,” one woman wrote to the Berliner Tageblatt newspaper at the time. “The only natural adornment he ever had was his mustache, and that he is now ruthlessly mutilating. Instead of the peaceful hirsute ornament of the past he is now marring his face with a lot of bristles.” Of course, after April 1945, they didn’t have that problem anymore. 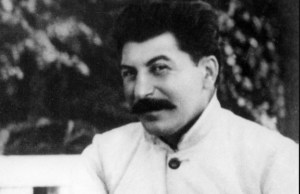 Stalin’s walrus mustache never quite achieved the status of shorthand for modern barbarity as Hitler’s did, but it was an indelible part of his public image — and a target for his detractors. “Stalin is known the world over for his mustache, but not for his wisdom,” the smooth-lipped Josip Broz Tito, Yugoslavia’s then-prime minister, remarked in 1951 as relations with his Soviet erstwhile mentor were fraying.

Stalin could be quite sensitive about these things, as the Russian poet Osip Mandelstam learned the hard way. In 1933, shortly after Stalin’s agricultural collectivization policies plunged the Soviet Union into famine, Mandelstam wrote a short and searing poem titled “Epigram Against Stalin.” Its contemptuous evocation of the dictator included a few unkind words about his facial hair:

His greasy fingers are thick as worms,
his words weighty hammers slamming their target.
His cockroach moustache seems to snicker,
and the shafts of his high-topped boots gleam.

Bad move. Stalin was not amused, and had Mandelstam arrested and sentenced to exile in the Ural Mountains. 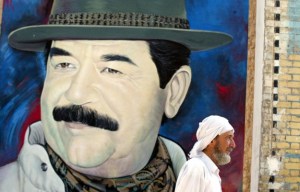 Though the model that he sported in his prime was Stalin-esque in its particulars, Saddam Hussein’s mustache was less a product of his own self-styled personality cult than it was of Iraqi tradition. Bushy mustaches had been synonymous with manhood in Iraq since the 16th century, a remnant of Ottoman rule in Mesopotamia. Disrespecting them was a grave insult; at a summit in Doha days before the beginning of the Iraq war in 2003, Iraqi diplomat Izzat Ibrahim al-Douri lashed out at his Kuwaiti counterpart by shouting, “Curse be upon your mustache!” Rallying military officers in Baghdad the same week, Saddam invoked a tribal adage, telling them, “I don’t need to say that Iraq is attached to your mustache, because after all it is your country.”

In the early months of the war, U.S. soldiers played along; many units were ordered to grow mustaches as a nod to local culture. But as the war took a turn for the worse in 2004, the razors came back out. “We grew them for the Iraqi people,” Marine Lt. Col. Brennan Byrne told the Associated Press on the eve of the battle for Fallujah in April 2004. “We shaved them off for us.” As for Saddam himself, he went to the gallows in 2006 not with his signature jet-black mustache, but with a salt-and-pepper beard.

The Zimbabwean strongman’s mustache is easy to miss, cropped so closely within the confines of his philtrum that it could be mistaken for a shadow. But it’s there nonetheless, the narrowest of toothbrushes — and if it evokes a certain Führer, it may not be entirely by accident. Mugabe is an unapologetic fan: On the eve of a brutal reprisal against his opponents in 2003, he declared, “I am still the Hitler of the time. This Hitler has only one objective, justice for his own people, sovereignty for his people, recognition of the independence of his people, and their right to their resources. If that is Hitler, then let me be a Hitler tenfold. Ten times, that is what we stand for.” 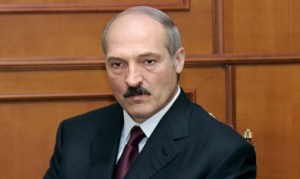 When a CNN reporter described Europe’s last dictator in 2001 as “a man whose 1950s-style Soviet-era rule is echoed by his Stalinist moustache,” he gave the Belarusian strongman far too much credit — Lukashenko’s trapezoidal soup-strainer is more mid-tier bureaucrat than world-historical tyrant. Nevertheless, Lukashenko’s detractors have latched onto his mustache with aplomb. In 2005, student demonstrators were jailed for wearing fake presidential whiskers; and when Lukashenko arrived in Lithuania for an official visit in September 2009, he was met with protest banners reading, “No country for mustache!” 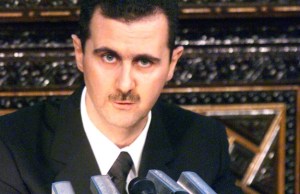 The Syrian president’s decision to shave the mustache he had sported for his entire political life prior to his March 30 speech promising an implausible array of reforms was no doubt intended to carry some symbolic weight in the Middle East — a region in which the mustache has often been seen as the bristly line between tradition and modernity. But Assad’s thin variant beneath his beak of a nose never made much of an impression to begin with (though it did inspire Christopher Hitchens to call him a “human toothbrush”). Like most other things about his presidency, it was a hand-me-down from his father and presidential predecessor, Hafez al-Assad, who wore a considerably more robust version of the same during his nearly three decades of rule. Taking over a successful family business is never easy.