A visit to the embattled city of Ajdabiya finds the anti-Qaddafi resistance slightly less ragtag than before, but still not quite professional.

Ryan Calder, a Ph.D. candidate in sociology at the University of California, Berkeley, is traveling in rebel-held eastern Libya this month, interviewing the revolution’s participants and witnesses. You can read earlier installments in this series here.

AJDABIYA, Libya — In the past week, this rebel holdout has gone from a secure rear base to a tenuous outpost just behind the front. Muammar al-Qaddafi’s troops have pushed the front line, once between Bin Jawad and Qaddafi’s hometown of Sirt, back to Ajdabiya and Brega. There were rumors among the press corps on April 7 that Qaddafi’s forces had reached Ajdabiya, but at 6 p.m. that evening, there were only rebel forces. Rebels insisted that they controlled territory as far as 25 miles west of Ajdabiya, but that seemed optimistic.

As recently as March 29, when rebels still controlled the crucial oil towns of Ras Lanuf and Brega, the front  — about 170 miles west of Ajdabiya on the coastal highway — was full of ragtag rebels with Kalashnikovs, wearing jeans and T-shirts and other civilian clothes, milling around near the front. There were many men hanging around who had no weapons at all. Some, including graybeards in their 70s, sat atop sand dunes, surveying the back-and-forth rocket fire and insisting that they would “stand their ground” against Qaddafi no matter what. Others said they were there to supply the troops at the front with water and food, but were not operating under any organized command.

Now, these civilian rebels and hangers-on appear to be almost completely gone from the eastern front. Today in Ajdabiya, there were few people in civilian clothes except doctors at the hospital, ambulance teams, and press. The majority of those near the front are dressed in military gear and seem to be under some system of command, often moving their rocket launchers and army jeeps in tight packs of four or five vehicles at a time. These rebels seem tense. They have been losing ground, and the 93 miles between Ajdabiya and Benghazi, the political and economic center of opposition territory, is nothing but desert.

The shift in who’s fighting the war is probably not a sign that the old amateur rebels have been enlisted under a new command structure, but rather that they’ve mostly gone home to Benghazi, Derna, Al-Bayda, and other eastern cities. These civilian rebels achieved the dramatic victories of the revolution’s early days in February, storming arsenals and state-security institutions in the face of machine-gun fire across eastern Libya with little more than willpower and their Kia sedans. But now they are returning to the business of being civilians. The Transitional National Council, and the more seasoned military hands on the opposition side, have encouraged this. Military-manned checkpoints now make it difficult for civilian rebels to make it up to the front.

Part of the change is that there is much less for civilian rebels to do on the eastern front these days, as the war there has become a game of artillery exchange rather than street fighting. The core army and special-forces components of the opposition forces — who were always present at the “front of the front,” doing much of the fighting and launching of artillery — are now almost the only forces visible on the eastern front. 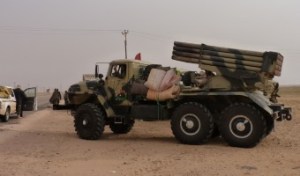 But just because the opposition is now better organized and somewhat more professional, that doesn’t mean it’s going to stop losing ground in the east. It is simply being outgunned by a superior fighting force. Qaddafi’s militias have better, newer weapons and superior training. And opposition forces remain less organized than a modern conventional army. Rules about where journalists can and can’t go, for example, are unclear. Six miles outside Ajdabiya, the car I was riding in — carrying five foreign journalists — stopped next to two Soviet-era Grad rocket launchers. At first, we were sternly told that media weren’t allowed to stop and take pictures. But after chatting with the troops for a while, they offered us grape juice. And as their trucks fired up their engines and left for the front five minutes later, they gladly posed for pictures in their rocket launchers (above).

The staff at a rebel training camp I visited this morning, which has been running since late February, told me they had expanded their activities recently. This may be both because of internal pressure to better organize the rebels and because of external questions (from Western leaders) about who exactly the rebels are. One staff member explained that people who had past military training — i.e. before the revolution — were being given additional training before being sent to the front. Rebels with no past military experience were also being trained, and will be used for civilian functions: manning highway inspection posts, patrolling cities, and so forth. In each case, the training courses are two weeks long. It’s not Quantico, but it’s a start.

Unlike on the eastern front, civilian rebels probably remain crucial to front-line fighting in besieged cities like Misrata and Al-Zawiyah in the west. Casualties there are mounting, and the fighting is said to be bloody, though reliable information is scarce. Rebels control Misrata’s port, so supplies and troops (and a few intrepid journalists) travel there by boat from Benghazi, navigating between shells fired by Qaddafi’s forces. And now that Qaddafi’s troops are on the outskirts of these cities, it has become much more difficult for NATO jets to bomb them without risking civilian casualties.

From the perspective of the Benghazi street, Misrata and Al-Zawiyah are now the opposition’s heroic outposts. A Turkish hospital ship recently stopped in Benghazi on its way from Misrata, bearing many severely wounded people, including quite a few amputees. A crowd gathered outside the ship (even though access to the quay was restricted), chanting that Qaddafi would soon fall and that Misrata would be free. Today, I drove through a traffic roundabout in Benghazi that had been renamed “Circle of the Misrata Marytrs.” Graffiti at the next traffic light read, “Hail the martyrs of Zawiyah.”

NATO bombing continues to support the opposition on the eastern front, but it is much more sporadic than during the early days of coalition air strikes late last month. Perhaps this is because of fears of striking civilians and opposition troops — this week, NATO planes have killed at least 17 of them on the eastern front — but the hesitation may also be a function of political infighting. The split between countries opposing intervention, such as Turkey and Germany, and those supporting it, such as France and Britain, remains prickly. And Barack Obama’s administration appears increasingly wary of involvement. The search for a diplomatic exit has raised hackles in eastern Libya as well: A visit to Ankara by Qaddafi envoys this week outraged Benghazi residents, who are now marching through the streets carrying signs opposing Turkish Prime Minister Recep Tayyip Erdogan. One rebel soldier at a checkpoint I passed through today asked if anyone in our car was Turkish. (No one was.)

Officially, spokespeople for the Transitional National Council continue to thank NATO and its member states for their support. But on the street, people contrast the coalition’s aggressive attacks on Qaddafi forces during late March — under French, British, and American leadership — to the sporadic air strikes and friendly fire incidents that have occurred since NATO took leadership of coalition operations. Today, a bus driver in Benghazi told me: “We just don’t have confidence in NATO anymore.”

An ambulance driver outside Ajdabiya made the point with his hands: “Sarkozy,” he said while flashing a thumbs-up. “NATO,” he said, with a thumbs-down. “Sarkozy bombed Qaddafi’s forces,” he explained. “Why is NATO bombing the rebels?”