The deadly weapons floating around in eastern Libya could serve as the fuel for a bloody insurgency.

During his 42 years in power, Libyan leader Muammar al-Qaddafi's unpredictable behavior has become the stuff of legend. But on one issue Qaddafi was remarkably consistent: He was unrelentingly obsessed with purchasing a massive arsenal of weapons from whoever was offering them. As a result, much of Libya resembles one vast arms bazaar -- a museum of curiosities for arms inspectors, and a gallery of horror for those concerned about the safety of civilians. With the collapse of Qaddafi's control in eastern Libya, vast amounts of weapons and munitions are now up for grabs, often to whoever gets there first. 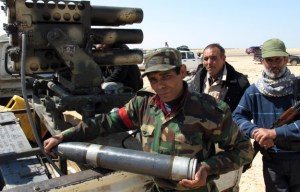 During his 42 years in power, Libyan leader Muammar al-Qaddafi’s unpredictable behavior has become the stuff of legend. But on one issue Qaddafi was remarkably consistent: He was unrelentingly obsessed with purchasing a massive arsenal of weapons from whoever was offering them. As a result, much of Libya resembles one vast arms bazaar — a museum of curiosities for arms inspectors, and a gallery of horror for those concerned about the safety of civilians. With the collapse of Qaddafi’s control in eastern Libya, vast amounts of weapons and munitions are now up for grabs, often to whoever gets there first.

I have been traveling around eastern Libya for most of the past six weeks, since the first days of the regime’s collapse, trying to establish a record of the ongoing human rights abuses in the country. Human Rights Watch has been investigating the large-scale killings of protesters by Qaddafi’s forces in February, as well as the more recent possible forced disappearance of hundreds of people into the custody of Qaddafi’s fighters at the front. Reporting from eastern Libya has been a roller-coaster ride: I have witnessed the euphoria of the uprising’s early days, as Libyans celebrated their newfound freedom, to the despair of just a few weeks ago as Qaddafi’s forces were once again at the gates of Benghazi. For many in eastern Libya now coming to grips with the limitations of their own untrained and unskilled rebels, the future remains uncertain. For these people, there is no middle ground — either the rebellion succeeds, or they face certain death if Qaddafi regains control of the East.

And we’ve been looking at weapons and munitions — lots of them. These arsenals represent a matter of pressing concern for human rights organizations because in the wrong hands, powerful military weapons can wreak havoc on the civilian population. In 2003, Human Rights Watch researchers deployed all over Iraq to inform U.S. authorities of the massive, unsecured weapons caches that we had found scattered across the country, urging them to secure the stocks. But the U.S. and allied armed forces, too busy looking for nonexistent weapons of mass destruction, failed to act. We watched in despair as weapons stocks were looted in places like Baquba, where Saddam’s Second Military College had vast supplies of powerful munitions.

Everyone paid the price for the failure to secure those weapons: Baquba became the capital of the bomb technicians, turning thousands of high-explosive artillery shells into powerful explosives aimed at the civilian population, the Iraqi security forces, and the Western militaries occupying Iraq. And eight years later, the Iraqi insurgents still haven’t run out of their stock of weapons.

Libyans are extraordinarily welcoming people, and they don’t seem to mind when I poke my nose into the backs of the battle-ready pickups at the front line and snap some pictures of the weapons and munitions the rebels are carrying. Even at the military bases and weapon depots under rebel control, a few words of introduction normally led to a warm welcome and a tour of the facilities. That is, if there is anyone guarding the facilities in the first place. When I went to the main military weapons depot in the contested town of Ajdabiya on March 27, just after Qaddafi’s forces had fled the city and rebels were still busy celebrating their victory, I had the entire base and its 35 munitions bunkers, stacked to the rafters with weapons, all to myself for several hours.

What we found was shocking. Qaddafi’s weapon stocks far exceeded what we saw in Iraq after the fall of Saddam Hussein; some of the weapons, such as the surface-to-air missiles capable of downing a civilian aircraft, now floating around freely in eastern Libya are giving security officials around the world sleepless nights. After I began circulating some of the pictures I had taken, I began getting anxious calls from arms-control officials, asking for more details about what I had seen. There is good cause for U.S. and European officials to worry — there are rocket-propelled grenades, surface-to-air missiles, and artillery shells full of explosives that can easily be refashioned into car bombs. And there are plenty of groups in the region, including al Qaeda affiliates and rebel movements, that would love to get their hands on these weapons.

Among the weapons of greatest concern to Western security officials is the SA-7 “Grail” surface-to-air missile, a Soviet-designed, heat-seeking, shoulder-launched missile designed specifically to shoot down low-flying planes. The SA-7 — basically a long green tube with the missile inside — belongs to a family of weapons known as man-portable air-defense systems, or MANPADS. Although these weapons date back to the 1960s, they remain extremely deadly, especially against civilian planes without defense systems. Two SA-7 missiles were fired by al Qaeda operatives at an Israeli chartered Boeing 757 during a November 2002 attack in Mombasa, Kenya, narrowly missing the plane. During the past month and a half, we have seen literally hundreds of SA-7s floating around freely in eastern Libya. The SA-7s require assembly with a trigger mechanism and a battery cooling pack attached to the launch tube, and many of the launch tubes we saw were unassembled. However, some of the SA-7s had been fully assembled.

While the SA-7s have caused the greatest alarm among Western security experts, the rest of Qaddafi’s extensive arsenal is nothing to laugh at. We found many varieties of guided anti-tank missiles, including the advanced laser-guided AT-14 “Spriggan” (known in Russia as the Kornet), which was reportedly used by Gaza-based militants one day ago in an attack on a school bus in southern Israel that critically injured a teenager. The Spriggan also served as one of Hezbollah’s most effective weapons against Israeli tanks in the 2006 Lebanon war. And there are tens of thousands of some of the nastiest anti-tank mines in the world in Qaddafi’s warehouses — nasty because they are made mostly out of hard-to-detect plastic and can be armed with an anti-lifting device that causes the mine to explode when attempts are made to remove it from the ground.

We also found thousands of 122-mm “Grad” rockets, which are used in a launcher that fires salvos of 40 rockets at one go and are capable of sowing destruction up to 40 miles away. The Grads were the Afghan mujahideen’s weapon of choice during their deadly civil war in the early 1990s following the Soviet withdrawal — they used these rockets to reduce Kabul to rubble. Eastern Libya is also home to tens of thousands of rocket-propelled grenade launchers, which are powerful enough to blow up a tank or punch a hole in a concrete building. We found tens of thousands of artillery, tank, and howitzer shells of various calibers, all loaded with high explosives easily convertible into car or roadside bombs. We even found HESH (high-explosive squash-head) shells, which are filled with plastic explosives  — a dangerous tool in the hands of terrorist groups.

The dangers we saw were not limited to the unguarded stockpiles of weapons. There are vast amounts of abandoned munitions and unexploded ordnance everywhere on the constantly shifting front lines along the coastal highway in eastern Libya. The recent airstrikes by international coalition forces on Libyan government military targets have added to the battlefield debris, leaving behind destroyed ammunition, vehicles, tanks, Grad launchers, and artillery pieces, often still loaded with munitions. Families, often with their children, have been visiting some of these strike sites, taking away potentially deadly mementos. Qaddafi’s forces have added to the dangers by laying new minefields — we discovered two such fields, containing dozens of anti-tank and anti-personnel mines, in Ajdabiya after pro-regime forces withdrew. Who knows how many more such minefields have been laid, only to be discovered when someone steps or drives over these concealed hazards?

The news is not all grim. Part of the good news is that the opposition forces in eastern Libya have now begun to take stronger steps to secure the weapon storage facilities in the areas under their control, and have begun to deploy military teams to collect dangerous unexploded and abandoned weapons. Human Rights Watch has been meeting with opposition officials, both civilian and military, for weeks now to discuss the dangers posed by some of these weapons as well as other human rights concerns, and have been impressed by their willingness to consider our recommendations and take corrective actions. A lot remains to be done, of course, but the commitment of the rebel authorities to break with the past and build a modern country that respects civil rights seems sincere and consistent with their actions to date. We’ll continue to watch them and their conduct closely.