The Oil and the Glory

No sheriff in oil town: The latest Reuters poll of oil traders forecasts oil prices to pass $130 a barrel by the end of the year, which seems a fairly safe bet given that the widely traded U.K. blend went past $124 today. In terms of the whys, it’s geopolitics, argues the usually sober-thinking Ed ...

No sheriff in oil town: The latest Reuters poll of oil traders forecasts oil prices to pass $130 a barrel by the end of the year, which seems a fairly safe bet given that the widely traded U.K. blend went past $124 today. In terms of the whys, it’s geopolitics, argues the usually sober-thinking Ed Morse — the existence of autocratic, sclerotic and unresponsive Middle East governments is old, but not the local reaction to it. Morse writes in the Financial Times:

The prospect of the largest oil-producing countries confronting challenges, such as those seen largely in north Africa so far, is more probable now than a year ago, telescoping the potential day of reckoning and raising the probability of an apocalyptic oil supply disruption.

Leah McGrath Goodman notes the role of the casino — traders betting on the news out of the Middle East.  But, in an overnight note to clients, hedge fund analyst Peter Beutel at Cameron Hanover laments the entire cycle of higher prices — the “spiral in motion” that we are witnessing. Beutel writes:

It goes like this: A stronger economy helps boost oil prices as investors anticipate stronger future demand. Higher prices (for refined products) hurt consumers and lead to demand destruction. Higher oil prices hurt consumers and their ability to spend money elsewhere. As a result, in order to keep the economy going, the Fed needs to keep rates low or money inexpensive, and that hurts the dollar, which boosts oil prices. A weaker dollar helps exports, and that helps the economy, boosting oil prices, hurting the dollar as well as consumer discretionary spending. It gets absolutely dizzying. It has elements that want to halt the cycle and other elements that keep it in motion. The latter factors are dominant here.

… but investors hedge with clean tech, too: Right alongside the runup in oil prices we are seeing a big rise in investment in green technology, according to the Cleantech Group. Investors poured $2.5 billion into the sector in the first three months of this year, mostly in mature solar and electric-car companies. That was 30 percent higher than the same period a year ago, and the largest sum since the third quarter of 2008. It does not mean that investors are turning back to clean energy — hardly any money went into startups or companies not yet in the market. Instead, it looks like a hedging strategy — investors see oil demand destruction ahead given the direction of prices (in 2008, U.S. motorists — the biggest oil gluttons on the planet — began to buy a lot less gasoline when prices at the pump reached $4 a gallon), and so are pouring money into already-existing clean-tech products. As for the rest, in the Wall Street Journal, Guy Chazan writes that money is pulling back in biofuels, since it looks like many, many years before any will be competitive with gasoline. Read on for more of the Wrap.

… and shale gas just keeps coming: Is there simply so much world-changing shale-gas out there that there is no stopping it? That’s what the U.S. natural gas lobby seems to think — that for political, environmental and economic reasons, the world will turn in a massive way to natural gas from both coal and nuclear, and that it thus does not have to police its ranks, weed out bad gas patch practices, and disclose the composition of its hydraulic fracturing fluid. I personally think the industry is erring — if the industry does not take these steps itself, Washington will force it to, thus putting it in precisely the place it does not want to be, which is under federal regulation.

But one can see why the natural gas folks might have this attitude. Take a look at a 365-page report this week from the federal Energy Information Administration, which evaluated shale gas reserves around the world. For those who don’t have time to go through 365 pages, here is the takeaway: shale gas technically increases global natural gas serves by a whopping 40 percent. If you believe in supply-driven demand (as I do), you can see why the industry thinks it’s in the catbird seat.

One added interesting detail from the EIA report: China has by far the most — 1,275 trillion cubic feet of technically recoverable gas, or half again as much as the 862 trillion cubic feet in the United States. That is more fodder for those of us who think that China will shift much of its planned coal consumption to natural gas. 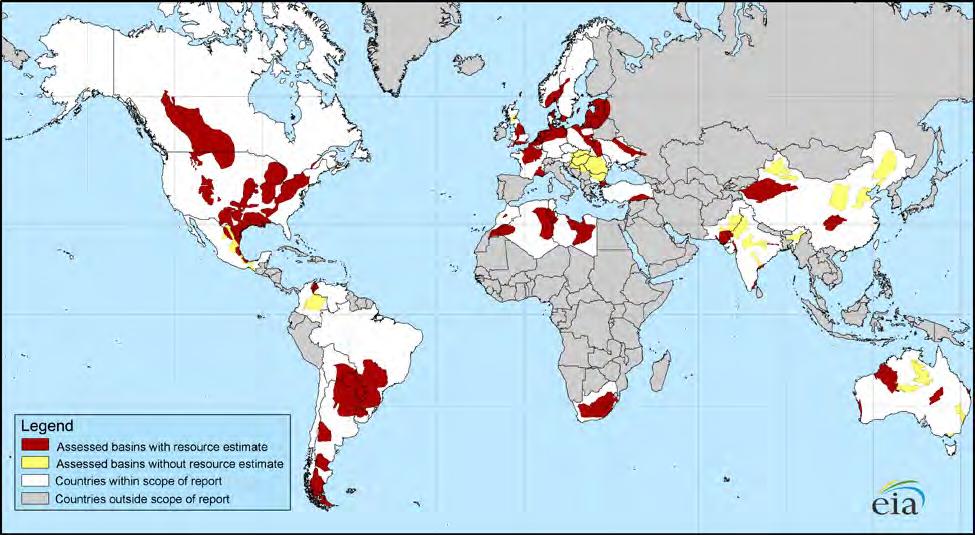 BP — when will I be loved? BP CEO Bob Dudley, confronting a cold snap in his relations with the United States, in January turned to better weather in Russia, where he quickly snagged an enviable deal to explore the Arctic with Rosneft. BP continued its poor record at love, however, as its longstanding Russian partners — four oligarchs who collectively call themselves AAR — objected to their exclusion from the Arctic party, and successfully sued in Europe. Today, a Swedish arbitration panel — having already rejected the Arctic partnership, given AAR’s rights of first refusal on any BP ventures in Russia — declined BP’s request at least to keep its plans alive by proceeding with a share swap with Rosneft. It is a huge blow for the prestige of Dudley, who looks wholly flat-footed in Russia, what had supposed to be his ground of expertise.

Where do we stand? As they have done since first tying up with BP in the 1990s, the Russian oligarchs are playing hardball. They are saying in effect to BP — we are prepared not only for you to lose the Arctic, but your Russian position entirely; why don’t you sell out your 50 percent share in Russia to another major oil company? Such a position does not stand the smell test — what other major is willing to undergo the type of continuous warfare that BP has experienced? But the point is made. BP is in a fix. It has few options.

Yet there is light within this tunnel. It is that Igor Sechin — aka Darth Vader, the man who struck the Rosneft deal with BP — suddenly appears to be in trouble himself. Russian President Dmitry Medvedev has followed through with his order for government officials to vacate their positions in state-owned companies, apparently robbing Sechin of his chairmanship of Rosneft. The meaning of this order is not yet clear as regards BP, but it could clear the way for BP to offer the oligarchs a seat alongside itself in the Arctic, something that Sechin appears to have opposed. If there in fact is new Rosneft management — it is possible that Sechin will officially go, but then simply rule from behind closed doors — Dudley may not want the oligarchs sitting next to him, given his experience with them. But he may have little choice. Apart, that is, from selling out of Russia.