The Sounds of the Revolution

Ryan Calder, a Ph.D. candidate in sociology at the University of California, Berkeley, is traveling in rebel-held eastern Libya this month, interviewing the revolution’s participants and witnesses. You can read earlier installments in this series here.

BENGHAZI, Libya — Lately I’ve been trying to work in Benghazi’s press center, set up by the opposition for foreign press in the building that — until the revolution — housed Benghazi’s high court. It’s a dank building with crumbling walls, but it’s now covered in bright hand-drawn posters, most of them mocking Col. Muammar al-Qaddafi in one language or another. It has Internet — slow and sporadic, like all telecommunications in Libya at the moment, but a crucial service nonetheless. But it turns out to be a pretty difficult place to get any work done. Free Benghazi has become a raucous place, one with its own loud rhythms.

When I was here the afternoon of April 8, a rally passed by, chanting slogans. This is pretty standard — rallies pass by every day, starting in other parts of the city and ending at the courthouse square, which, like Cairo’s Tahrir Square, was the opposition protesters’ base when the revolution got under way in mid-February. These days, many of the rally signs are in English, to get the world’s attention — everyone is well aware of the international reach of photographs taken here.

In late March, in the early days of coalition bombing, the signs at rallies largely expressed gratitude toward those countries leading the campaign of airstrikes. But in recent days, as the war’s end no longer seems imminent, the rallies have taken on a more imploring tone. Yesterday, the demonstrators — who by my count were about 60 percent women — were holding signs that read:

SARKOZY, CAMERON: PLEASE SAVE MISRATA LIKE YOU SAVED BENGHAZI

The red-black-green opposition flag is ubiquitous at these rallies, though a few demonstrators wave the French tricolor or the Qatari flag. (The Qatari government has contributed planes to the no-fly zone, sold oil to the opposition, contributed extensive humanitarian aid, and  recognized the opposition government as the legitimate government of Libya.) Those are the “big three,” though you occasionally see others: EU flags, American flags, Italian flags, Spanish flags, British flags, and Egyptian flags. The flag-waving rallies have become a regular enough feature of life in free Benghazi that they have given rise to a booming flag-selling business in the square. Small ones cost $3, big ones $5. Vendors sell mostly the red-black-green opposition flag, but you can buy French and Qatari flags too. Last week I asked a couple of teenage flag vendors where they got them. “We make them at home,” one of them told me, explaining that there’s a tailor in the family. 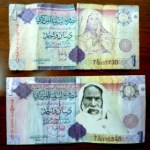 The stalls selling flags sell revolutionary memorabilia as well: pins, keychains, CDs. Also for sale is a faux one-dinar note that substitutes Omar al-Mukhtar’s figure for Qaddafi’s: al-Mukhtar, the hero of the anti-colonial resistance whom Libyans called “the Lion of the Desert,” was hanged by Italian forces in 1931. Al-Mukhtar was a native son of eastern Libya, and his image is ubiquitous here in Benghazi. Qaddafi rolled al-Mukhtar’s memory into the symbolism of his regime, though the appropriation was an awkward one — wary of threats to his own personality cult, Qaddafi removed a shrine to al-Mukhtar from Benghazi early in his rule, infuriating people there.

Now the opposition has taken al-Mukhtar back, and his image is plastered on cars and buildings everywhere, usually with the red-black-green flag in the background. (Al-Mukhtar’s grandson lent his family name to the anti-Qaddafi uprising in March.) I’ve interviewed countless rebels who recite to me al-Mukhtar’s famous phrase: “La nastaslim — nantasir aw namoot.” “We don’t surrender — we win or we die.” The al-Mukhtar faux one-dinar note sells for half a dinar — about 30 cents. It has convenient peel-away adhesive backing, so you can stick it on anything you want. And people here do.

I was at the press center around midnight on a recent evening when a man began delivering a thunderous speech on the street outside. It was full of exhortations to freedom and Allahu akbars (which don’t necessarily imply a religious message — just excitement and conviction). The PA system was of middling quality, and plenty loud — I loved the intensity, although it made focusing on writing a challenge.

Then, another man started singing anthems for the new Libya. People are often signing anthems for the new Libya in front of the courthouse, over the PA system — women, men, even kids. After sunset, crowds gather, and the singers appear on stage in front of a giant opposition flag. It can be quite moving — and it must be doubly so for the spectators, many of whom are now able to speak (and sing) freely about politics for the first time in their lives.

The most haunting song of all is Saufa Nabqa Huna (“We shall stay here”), which one hears everywhere — in the courthouse square, playing from car stereos, from houses in the street. There’s a man sitting in front of me now whose phone just rang. The ringtone is Saufa Nabqa Huna.

Unfortunately, the man singing last night was out of tune. Badly. Surely someone ought to tell him? It reminded me of those karaoke incidents where you just let someone embarrass himself because he’s had a few too many drinks, and hope he doesn’t remember it the next morning.

There are other sources of noise. There are the sirens of the squad cars driven by the Katibat al-Shuhada (literally “The Martyrs’ Brigade”), the civil guard corps trained quickly by the opposition as a stopgap to replace the police and internal-security forces who, under Qaddafi, monitored Benghazi’s streets. Cars honk a lot, because central Benghazi’s streets, many unwidened since the days of Italian colonial rule, are congested during the day. When asked what Qaddafi has done for their city, Shargawis — that’s what people from Benghazi are called — just point to these streets and say, “You tell me.”

Sometimes there’s random gunfire. I hardly notice it anymore. Most of it comes from people shooting off their weapons in the air for fun — there’s no fighting in Benghazi at this point — though even that has dwindled from two weeks ago; maybe the thrill is diminishing. But it’s still enough of a problem that someone posted a sign outside a grocery 200 yards from the courthouse reading, “Our children are sleeping — Don’t fire bullets.”

My friend Nabil had to repair his car roof last week because a bullet that someone shot up in the air came down and landed on it — the car he just bought two months ago. Ordering a new roof from Dubai for his Kia would ordinarily have cost him $300, but flights from the UAE have stopped, so he had to shell out $700 for repairs.

Sometimes, from the press center, you hear massive explosions that sound like car bombs. Those are from fishing boats that use TNT to blow fish out of the water (the blast fishing I wrote about earlier). The last time I ate at Bala, the excellent seafood restaurant on Benghazi’s corniche, I wondered whether my sea bass had been blown out of the water. But Muhammad, a medical student who lives by the ocean, tells me that “they only catch small fish with TNT, near the beach. The big ones come from the deep sea.”

You can tell which journalists arrived in Benghazi recently: They’re the ones who get up, look around, and ask what the hell just happened when the fishing blasts go off. The old hands sit and keep typing.

But today, there are no fishing blasts, no rallies, and no rousing speeches. It’s quiet. All I hear is the sound of waves crashing on the Mediterranean shore, 100 yards away. There’s a light breeze from the ocean. I’m ready to get some work done.

And then, from the square outside:

“I’m your laaaaaaady… and you are my man…”

Someone’s playing Celine Dion on a stereo in the square. Loud.

Xi Is Out to Prove That This Is China’s Moment

Taiwan Is More Than a Pawn to Be Sacrificed to China