Think American airlines are dangerous? At least you aren't flying in these five places.

After a number of recent incidents including the ruptured fuselage of a Southwest Airlines flight, an air traffic controller caught sleeping on the job at Washington's Reagan airport, and the aborted landing of a plane carrying First Lady Michelle Obama, lawmakers and the media are focusing new attention on U.S. airline safety.

That's all well and good, but a little perspective is needed. While the U.S. air system could undoubtedly use a few upgrades, it's nothing compared to the dangers faced by passengers in the following countries. All five are among the 23 on the EU's "blacklist" of countries whose airlines are prohibited from operating in Europe.

After a number of recent incidents including the ruptured fuselage of a Southwest Airlines flight, an air traffic controller caught sleeping on the job at Washington’s Reagan airport, and the aborted landing of a plane carrying First Lady Michelle Obama, lawmakers and the media are focusing new attention on U.S. airline safety.

That’s all well and good, but a little perspective is needed. While the U.S. air system could undoubtedly use a few upgrades, it’s nothing compared to the dangers faced by passengers in the following countries. All five are among the 23 on the EU’s “blacklist” of countries whose airlines are prohibited from operating in Europe.

Surprisingly, given its near constant state of conflict since the 1980s, Afghanistan is a pretty recent addition to the list of nations barred from flying in European Union airspace — the most-widely cited measure of international airline safety. The EU blocked flights from all of Afghanistan’s carriers in November 2010, on the grounds that the country “does not have the basic infrastructure to ensure aircraft safety… and has no aircraft registry, certification or inspection.”

The ban capped a rough year for Afghan aviation which included a crash in the northern mountains that killed 44 people. The plane, operated by the Afghan carrier Pamir Airways, was a Soviet-built Antonov-24 Turboprop — a model that went out of production in the late 1970s.

A more serious problem than the aging planes, however, may be the conditions on the ground. One pilot told the Guardian that the Bost airport in Helmand province “lacked basic safety equipment, had no radar system, and that the two air controllers had no formal training other than ‘a day’s orientation on correct radio procedure.'” A U.N. project intended to boost the country’s air safety system was cancelled last year due to lack of funds.

Afghanistan’s largest airline, Ariana, known to many as “Scariana,” is on the verge of bankruptcy — and the suspension of its few European routes. The airline reportedly issues safety licenses and certifications to mechanics and pilots for bribes of around $200 to $500. 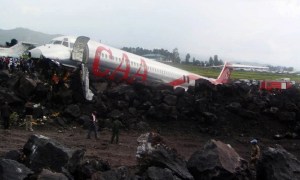 DEMOCRATIC REPUBLIC OF THE CONGO

With only 300 miles of paved roads in a country the size of Western Europe, the Democratic Republic of the Congo is forced to rely on a network of small airlines and mostly expat pilots. Unfortunately, with badly maintained runways and a fleet of rusting Antonovs and Ilyushins, tragic accidents are the norm. The African continent is not generally known for airline safety — with 16 countries on the EU blacklist — but nearly half of the crashes over the past decade were in Congo alone.

In 1997, after a Russian cargo plane crashed into a Kinshasa market killing more than 300 people, Congo’s transport minister announced that Soviet-made aircraft and Russian pilots would be barred from the country on the ground that they don’t speak French or English and “We don’t know their qualifications.” The policy apparently didn’t hold for long: Just this February, a Russian pilot and his Congolese co-pilot were killed when their Czech-made Let-410, carrying World Food Program aid, crashed on landing in the city of Bukavu.

The most bizarrely tragic recent story to come out of Congo’s airline industry was in October 2010, when a plane crashed, killing 20 people, reportedly because of crocodile smuggled aboard. Remarkably, the reptile, which apparently caused a panic after escaping from a gym bag into the plane’s cabin, survived the crash along with just one human passenger. 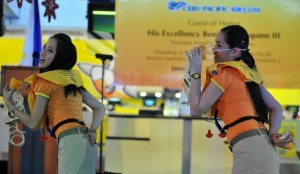 The Philippines earned the notorious distinction of having been added to the EU blacklist in 2010 and has also recently been put under heightened scrutiny by the U.S. Federal Aviation Administration due to “serious concerns” about the oversight of Filipino airlines.

The country’s most recent air tragedy was an April 15 crash into Manila Bay, which killed 14 people. The worst disaster was a 2000 Air Philippines Boeing 737 crash that killed 131. Just a year before that, an Cebu Pacific DC-9 crashed, killing 104.

The Philippines may still have a long way to go before their airlines meet international safety standards, but at least they’re investing in entertainment. On Cebu Pacific flights, stewardesses shimmy to Lady Gaga and Katy Perry while demonstrating safety procedures.

Philippines isn’t the only problem country in Southeast Asia, but neighboring Indonesia seems to be getting its act together, with a number of airlines being taken off the EU blacklist in 2009. 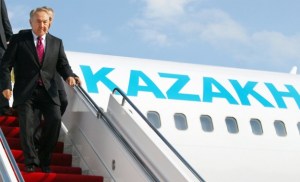 Officials in this booming, energy-rich country were understandably annoyed when Borat, the obscene, bumbling “Kazakh” character played by comedian Sacha Baron Cohen, arrived onstage at the 2005 MTV Europe Music Awards ceremony in an “Air Kazakh” propeller plane flown by a “one-eyed pilot clutching a vodka bottle.” Unfortunately, it’s become a bit hard for them to protest too much given that the EU blacklisted flights from all but one of the country’s airlines in 2009.

The blacklist could be a major impediment to President Nursultan Nazarbayev’s ambitions to make Kazakhstan a regional financial hub. The carriers’ problems stem from a lack of investment in the sector and low salaries for airline employees. Safety regulations have reportedly barely changed since the Soviet era.

A Kazakh Airlines plane was involved in the worst midair collision of all time in 1996 when it collided with a Saudi Arabian jumbo jet near New Delhi, killing all 351 passengers on both planes. It was later discovered that the Kazakh plane, an Ilyushin-76, had gone off course and was nearly 1,000 feet below the altitude assigned to it by the Indian air traffic controllers.

Not to be outdone, neighboring Kyrgyzstan is also on the blacklist and has a record of recent deadly crashes. 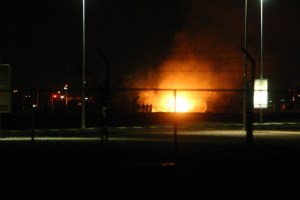 Both civil and military aviation are a dangerous proposition in Sudan. The country’s military suffered two deadly helicopter crashes in April 2011 alone. And perilous air travel has played a role in the country’s fractious politics. Southern Sudan’s first president, John Garang, was killed in a helicopter crash in 2005. In 2008, a plane crash claimed the life of the region’s defense minister, along with 21 others.

Unlike Congo, however, air tragedies aren’t necessarily the fault of crumbling Soviet dinosaurs. The country’s two most notorious air disasters, a 2008 explosion that killed at least 28 and a 2003 Sudan Airways crash that killed 116, involved an Airbus and a Boeing respectively.

The Sudanese government has strongly protested its blacklisting by the EU and blames U.S. economic sanctions for its inability to get new spare parts for its ageing planes.