Tim Hetherington was a member of a special, close-knit brotherhood: people who work in war zones. 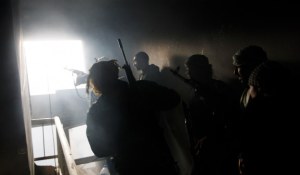 GENEVA—Last Wednesday, I was in Geneva chatting on Skype with my photographer, André Liohn, who was at the Misrata hospital in Libya. André was in the middle of telling me about a group of Ukrainian doctors who had been hit by a mortar round in the city when he suddenly went silent. Ten minutes later, he came back and wrote, in his broken English, “Man, a shit happened.”

“Tim and Michael have been hit by RPG. Tim is really bad. Mike is fine. Guy also fine. But Tim is bad.”

I was puzzled. Just two weeks before, my friend Tim and I had left eastern Libya, and he had said he wasn’t going back. So I chatted back, “Tim who? Not Hetherington?” And then, at 16:58, the words I never wanted to see popped up from André: “Yes. He died now. Just now. Chris also bad.” And that was how the first word of Tim’s death, and the eventually life-ending injury of his fellow photographer Chris Hondros, reached the world: on Skype.

André, Tim, and I were members a close-knit, but informal brotherhood — I half-jokingly call us the Vulture Club, as we usually convene only when the blood is flowing. Bonds forged in war run deep. Many of us have known each other since the bloodshed in the Balkans in the 1990s, although there are a few older ones around who still think of us as “the kids” (and we tease them right back about their arthritis and fading hearing, the later an inevitable result of being too close too many times to the bomb explosions). My emergency team at Human Rights Watch spends a lot of time in conflict zones with these journalists and photographers, so we feel a special connection.

In war, we have to be able to rely on each other. We meet on the outskirts of the world, where the messiest of conflicts are underway, places like Chechnya, Somalia, Iraq, and Afghanistan. The journalist I’m sharing a drink with in the evening may be the one applying a tourniquet to a potentially fatal wound if I am hurt tomorrow. It is not just the danger that draws us close, but also our time together and the experiences we share.

Over time, friendships forged amid conflict evolved into a worldwide network, providing lifelines of communication and safe houses around the globe. And the advent of the technological age has brought us even closer. Need to go to Central African Republic to cover a war? Send the word out and within minutes you’ll have a driver and translator lined up, if not an appointment with the president. Over email, Facebook, and Skype, we’re in constant touch with each other. When four foreign journalists disappeared from Benghazi more than two weeks ago, our network found their names by going to the hotels in town, then locating their families’ contacts on the Internet by sending a friend request to one of their mothers. Within 30 minutes, colleagues in Tripoli, contacted over Skype, had informed the government spokesperson, as well as the personal assistants of Muammar al-Qaddafi and those of his two sons Seif al-Islam and Saadi, the ones who wield real power. By nightfall, after constant pestering, the government was forced to admit to Nick Robertson of CNN that they were holding the journalists.

The Vulture Club has its own code of honor. Rule No. 1 is that when one of us gets hurt, we put down our notebooks and cameras until we get our brother or sister out. And that’s what I had to do last week. There was no time to even stop and mourn my friend Tim. The first priority was to inform the families before they heard about it on the news. As rumors of the tragic incident began spreading like wildfire on Twitter, we rushed to inform Tim and Chris’s photo agents. We managed just in time: As I was on the phone with Tim’s agent to confirm his death, she received a call from Tim’s mother.

(Some criticized André for posting the news about Tim and Chris’s death on his Facebook account before the families had been informed, but they should realize that because all other forms of communication had been shut down by the Qaddafi regime, for weeks André’s only access to the outside world had been through Facebook and Skype. He took down the post as soon as I told him it was inappropriate, and then proceeded to offer us invaluable help in coordinating the evacuation of the bodies and the wounded.) 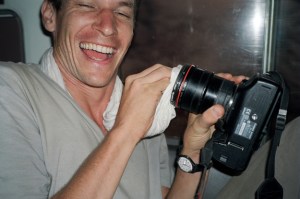 I spent the next eight hours fighting through tears as I informed friends of our loss and spent my time, once again on Skype from Geneva, helping to organize the evacuation of Tim and Chris’s bodies. There was no refrigeration in Misrata, no electricity, and I didn’t want my friends or their families to suffer. Once again we went to Skype, setting up endless chats between our colleagues in Misrata, our team in Benghazi, the operators of a humanitarian ship that was docked in the Misrata harbor, diplomatic officials, and the doctors at the Misrata hospital. The officials of the International Organization of Migration, busy evacuating hundreds of trapped African migrants from Misrata harbor, couldn’t have been more helpful, agreeing to hold their ship until we could get the bodies to the harbor. Many pitched in as we organized the death certificates necessary to release the bodies from the clinic, and attempted to find ice to keep Chris and Tim refrigerated on the 20-hour journey to Benghazi (impossible, as there was no electricity), and finally a full refrigeration unit to store the bodies on the ship. We made it just in time, organizing the delivery of the bodies to the ship shortly after midnight, nearly 8 hours after we first learned of the loss.

In the midst of the chaos, I was contacted even by the soldiers in Afghanistan that Tim and Sebastian Junger followed around in their Oscar-nominated documentary Restrepo. As much as Tim meant to us, the soldiers told me he was also one of their own, and the U.S. generals at Africa Command were closely following our efforts and were willing to do whatever they could to help bring Tim home.

As I write, days later, we are still on Skype, finalizing the evacuation of the two wounded journalists, Guy Martin and Michael Brown by ship, as a storm brews off the Libyan coastline. And we have another colleague to worry about: A French journalist has been hit in the neck, and is likely to suffer paralysis or worse unless he is urgently evacuated.

Tim was one of the first photographers who had regularly gone on assignment for us at Human Rights Watch. There is so much to say about Tim and his work. He was a genius who understood that we were moving beyond the world of the still image, and was constantly experimenting with photos, video, sound, and whatever else he could think of, mixing it all up. When he covered something, he gave it his all. When he was covering the civil wars in Sierra Leone and Liberia, he rented a local pad and moved to the region for several years. He was a hunk: On several occasions, single female friends inquired whether he was single after meeting him. He was in love when he died, telling me about his Somali girlfriend at our last meal together, just two weeks before.

But to us, he was first and foremost one of our greatest heroes and dearest friends. It may sound like a cliché, but he did seem immortal. When you ran into Tim on the front lines, with his calm and confident smile, you knew that you were in the right place but also somehow that it would also be alright, that we would go home safely at the end of the day and have a story to tell. Tim’s and Chris’s deaths shattered that illusion: None of us are safe on the front line.